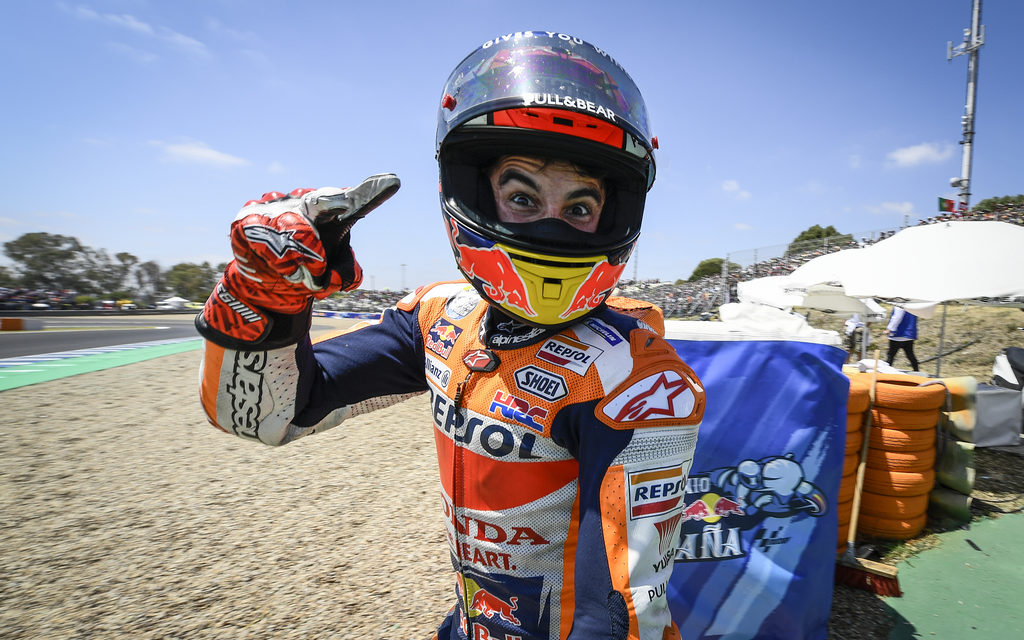 Sunday, 05 May 2019
Marc Marquez (Repsol Honda Team) has taken a home win in the Gran Premio Red Bull de España, putting in a flawless performance to make some amends for his crash out the lead in Texas – and taking back the Championship lead. Alex Rins (Team Suzuki Ecstar), despite a difficult qualifying, sliced through to take second and second in the Championship by just a single point, with Maverick Viñales (Monster Energy Yamaha MotoGP) on the podium for the first time this season in third.

Marquez took the holeshot from third on the grid, with Franco Morbidelli (Petronas Yamaha SRT) just getting the jump on rookie, polesitter teammate Fabio Quartararo to slot into second. But it was tight, with Andrea Dovizioso (Mission Winnow Ducati) initially threatening for P2 but then getting shuffled back to fifth behind Viñales. Rins made progress as well, immediately moving up from his P9 on the grid.

Marquez set about getting into a rhythm at the front, but Morbidelli wasn’t letting the reigning Champion escape. Little by little, however, the gap began to extend. And as the number 21 dropped off the back of the Repsol Honda in the lead, teammate Quartararo was looking menacing in third. Sure enough and soon enough, the Frenchman was able to capitalise on a small mistake for the Italian and it was the rookie polesitter into second.

Unleashed, Quartararo soon set about getting on terms with Marquez’ pace and dropped the squabble for third in a few corners – looking like he might even be on for a forward assault. But suddenly, the Frenchman’s Petronas Yamaha SRT machine was moving off the racing line and Quartararo was left dejected on the way back to pitlane with a mechanical problem. From a record-breaking and youngest ever pole position to a chance at his first MotoGP™ podium, the number 20 sadly left Jerez empty handed.

It wasn’t to be, however, as the Spaniard escaped the fight to complete the podium but wasn’t able to reel in the race leader. Marquez crossed the line in clear air for an impressive answer to his critics after his COTA crash, and the 25 points for the win put him back at the top of the Championship by a single point. Ahead of whom? Alex Rins, who moves up into second after his impressive second from ninth on the grid.

The fight for third became a duel between Viñales and Dovizioso, and the Italian was close throughout the final lap looking for a way through – but the Spaniard held firm. Under pressure throughout, he took his first podium of the season after some difficulties with the start in recent races. Petrucci followed his teammate home in sixth – a couple of seconds back – with Valentino Rossi (Monster Energy Yamaha MotoGP) slicing through to sixth from P13 on the grid.

Rossi fought off the likes of Jack Miller (Pramac Racing) – who later crashed out – Cal Crutchlow (LCR Honda Castrol), teammate Takaaki Nakagami (LCR Honda Idemitsu) and, eventually, Morbidelli too to make his progress through – the ‘Doctor’ inside the top ten for the first time in the weekend on Sunday.

Morbidelli was in P7 by the flag ahead of Crutchlow, Nakagami, and an impressive P10 from wildcard and Honda test rider Stefan Bradl (HRC Team). Aleix Espargaro (Aprilia Racing Team Gresini) was 11th, ahead of a very difficult day for Jorge Lorenzo (Repsol Honda Team) down in 12th. Pol Espargaro (Red Bull KTM Factory Racing) was P13 ahead of teammate Johann Zarco, with Tito Rabat (Reale Avintia Racing) completing the points on home turf.

So as we leave the Spanish GP and head for the new challenge of Le Mans, it’s Marquez who’s made amends for his COTA crash and taken back the Championship lead – by a single point. Rins lurks close and seemingly needs only to work on his qualifying, and Fabio Quartararo looks to recreate his Jerez form on home turf. Don’t miss the fifth round of the season and tune in for France on the 19th May for more MotoGP™.