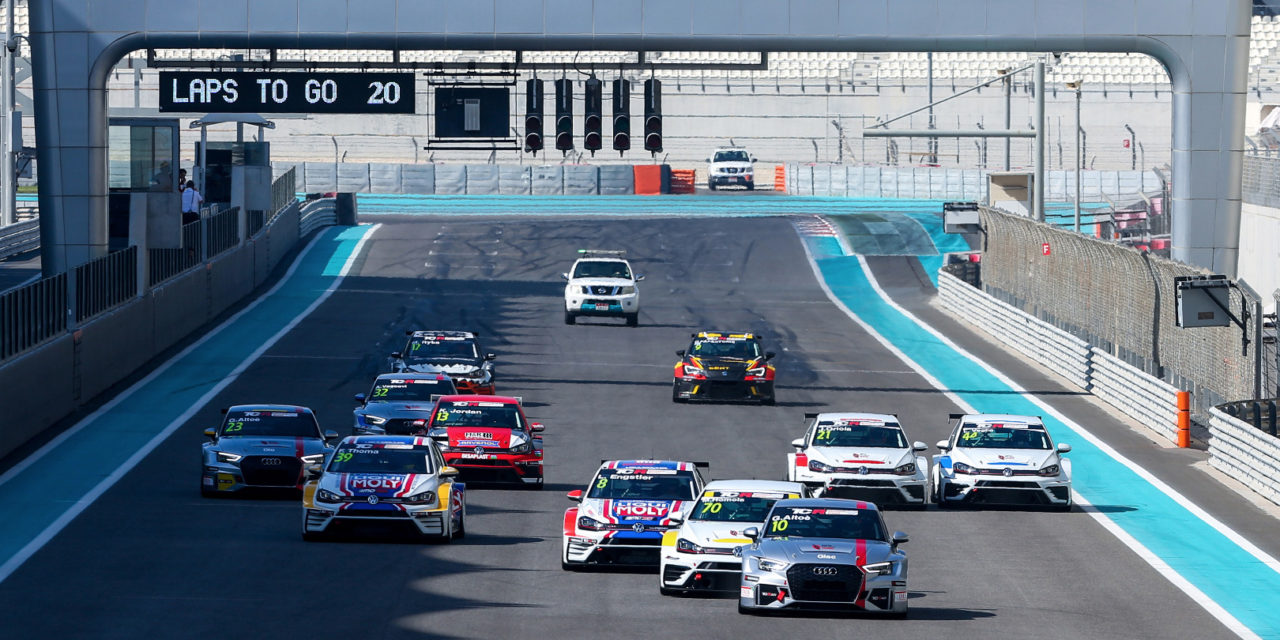 Altoè claimed an authoritative lights-to-flag victory in Race 1 from a trio of Golf cars driven by Mat’o Homola, Engstler and Florian Thoma.

The second race was much more exciting with a tough battle for the lead between Lorenzo Veglia, Thoma and Engstler. The three made a few contacts that forced Thoma to retire with a broken suspension while in first position and then cost Veglia a 30-second penalty for hitting and passing Engstler on the final lap.

Giacomo Altoè left Abu Dhabi as the first series’ leader with 45 point, while Engstler is second, only one point adrift. Homola lies in third position with 33 points.

The championship will resume next week (26 and 27 January) at the Dubai Autodrome for rounds 3 and 4. Giacomo Altoè converted his pole position into a victory in the opening event of the TCR Middle East International Series at Abu Dhabi’s Yas Marina Circuit.

The Italian driver sprinted at the start in his Audi RS3 LMS and never looked back, as he was able to keep Mat’o Homola’s Volkswagen Golf GTI at bay in the first part of the race before increasing his leading gap in the final laps.
Homola was able to maintain the second place, although he was closely chased by the Liqui Moly Team Engstler duo of Luca Engstler and Florian Thoma who also delivered a thrilling fight for the third position.
Behind them, Lorenzo Veglia overtook Kai Jordan for fifth. After taking the front at the start, Veglia led most of the race ahead of Liqui Moly Team Engstler teammates Florian Thoma and Luca Engstler. The final laps were red-hot, with Thoma trying to find a gap; on lap 15 the young Swiss clashed with Veglia at Turn 7 and took the lead ahead of Engstler. However, two laps later Thoma was forced to retire with a broken suspension.
Engstler inherited the lead, but on the last lap he and Veglia made contact; the Italian got the better of the situation and crossed the line first, with a slim margin.

Kai Jordan finished a comfortable third ahead of Race 1 winner Giacomo Altoè and Mat’o Homola.
After the race, Veglia was given a 30-second penalty for hitting Engstler on the final lap. This dropped Italian from first to eighth, while Engstler inherited victory, with Kai Jordan and Giacomo Altoè promoted to second and third respectively.

Quotes from the podium finishers in both Races
Giacomo Altoè (Race 1 winner): “I’m super happy. I was able to make a good start and I had a very good pace to keep the lead for the whole distance. The car’s set up was perfect and everything went well. I tried not to push too much in the first half of the race to save the tyres, and this helped me to stretch my gap in the final laps.”

Mat’o Homola (second in Race 1): “I made a very good start, overtaking Luca. Maybe I could have tried to pass Giacomo as well, but I had some issues with the gearbox. Then I followed him, but his car was faster on the straight and in the quick corners. I was pushing like hell, hoping that he would make a mistake, but he didn’t. Second place in the first race is good.”

Luca Engstler (Race 2 winner and third in Race 1): “These were tough races. In the first one I had a lot of understeer and lost contact with Homola in the first half. And then I had to defend my third place from Thoma. In the second race I was in the lead, braked in the usual position, turned in and Veglia crashed into the back of my car. I’m a bit angry, because he didn’t say sorry, but I’m pleased that the Stewards decided to act.”

Lorenzo Veglia: “I was very pleased and satisfied. I didn’t think I could be so competitive on my comeback to TCR after two years of GT racing. It was a tough and thrilling race. At the beginning it looked easy, because I had a small gap, but then the two Engstler boys were on my back and it was difficult to keep them behind. We made a few contacts, but it’s part of the Touring Car game. I don’t think there was something beyond the rules.”

Kay Jordan (third in Race 2): “I made e very good start and jumped to third. This gave me a big boost to fight for the position and I was able to keep a good pace for the whole race. I’m an old man and finishing ahead of young and fast drivers like Giacomo and Homola was great, especially when you think that I hadn’t raced for six months due to a problem with a leg.”