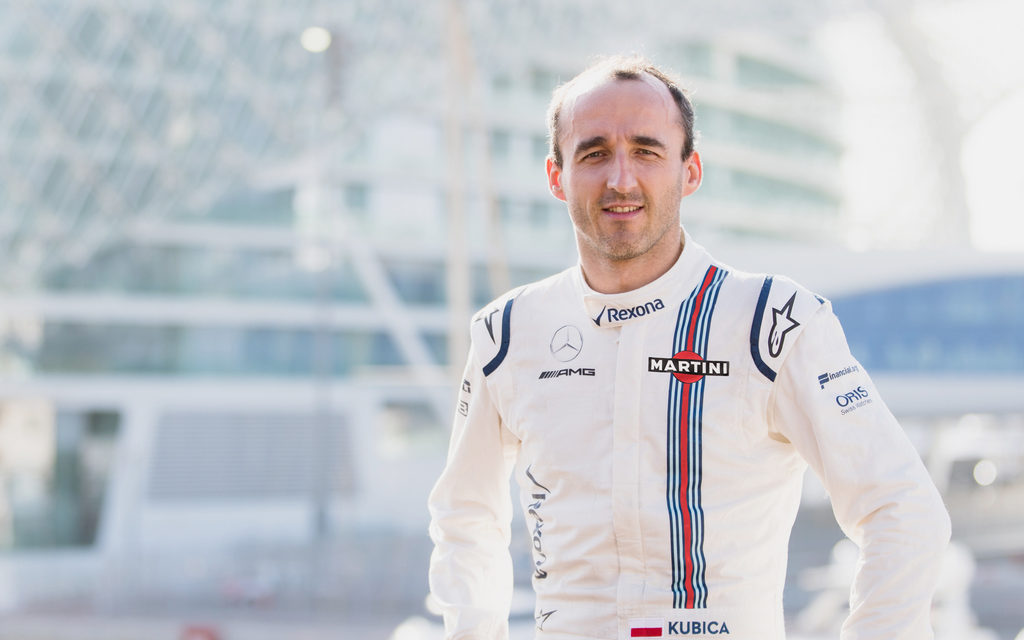 Robert’s return to Formula One included several tests with Williams over the second half of last year, as well as the Abu Dhabi Pirelli tyre test at the conclusion of the 2017 season. He will have a particularly active role within the team this year, including participation in the Barcelona pre-season testing, in-season testing, and will also take part in a number of race weekend practice sessions.
Robert’s experience and knowledge will prove invaluable to our technical group in the development of FW41’s car performance.  He will be able to assist the race drivers and engineers deliver better qualifying and race performance, and of course, be available to stand-in as the race driver if required. He will also support the team’s media and sponsorship support programme.
Robert Kubica said; “I’m extremely happy to be joining the Williams team as its official Reserve and Development Driver this season. I feel in the best physical shape that I have ever been, but it has taken a lot of work to get to where I am now, so I’d like to thank Williams for the opportunities they have given me so far, and for putting their faith in me with this appointment. I have enjoyed being back in the Formula One paddock over these past few months, and I now look forward to working with the Williams technical team, both at the factory and at the track, to really help push forward the development of the FW41 and to make a real difference to their 2018 campaign. Having driven both the FW36 and the FW40, I’m looking forward to seeing how the FW41 measures up on track and working with the team to ensure we can maximise the performance of the car. My ultimate goal remains to race again in Formula One and this is another important step in that direction: I cannot wait to get started.”
Claire Williams, Deputy Team Principal, said: “I am delighted to announce that Robert will be joining Williams as our Reserve and Development Driver for the 2018 season. All of us at Williams have been immensely impressed at what he has achieved, and it is a great credit to his strength of character and commitment to return to Formula One. We are excited to be continuing our relationship with Robert and look forward to working with him this coming season.”
Paddy Lowe, Chief Technical Officer, added: “First and foremost, we’d like to congratulate Robert on what he has achieved so far. To overcome his injuries, return to fitness, and drive a Formula One car again is a remarkable achievement, and one that few considered possible. We anticipate Robert will make a strong technical contribution to the team, using his wealth of experience in track testing, simulator work, and support to the race drivers and engineers at every race. He is a driver I have admired for many years and I am personally very happy to be working with him towards our 2018 Championship.” WILLIAMS MARTINI RACING Confirms Sergey Sirotkin to Join Lance Stroll in 2018
The 22-year-old Russian impressed the team with his performance at the Abu Dhabi Pirelli tyre test where he drove the FW40 for the first time, and will make his Formula One race debut at the 2018 Australian Grand Prix.
Sergey comes to Williams with a strong racing resume. As a member of the SMP Racing programme, in 2015 he competed in GP2, finishing third, and was the highest-placed rookie. In 2016, he was selected as Test Driver for Renault Sport F1, combining his role with a second season competing in the GP2 Series, a campaign which saw him finish third for a second successive year. In 2017 Sergey continued with Renault F1, and took part in four FP1 sessions as well as the Bahrain test, gaining valuable experience. Joining Formula One as an official race team driver marks Sergey’s progress to the highest level of the SMP Racing programme, which develops Russian drivers from karting through every level of circuit racing.
Sergey has been busy preparing for this season at the team’s factory and looks forward to partnering Lance Stroll, who enters his second year of Formula One, in 2018.
Lance broke several records during his debut Formula One season, which saw him take seven points-scoring finishes to place him 12th in the Drivers’ Championship, just one place behind his vastly experienced teammate. With a third-place finish at the Azerbaijan Grand Prix, Lance became the youngest ever rookie podium finisher, as well as the youngest front-row starter when he lined-up second on the grid for the Italian Grand Prix.
Speaking about the announcement, Lance Stroll said; “First of all I would like to welcome Sergey to Williams and I am looking forward to having him as my teammate. I know Sergey and I am sure we will very quickly form a close working relationship.  I really enjoyed my rookie season with the team, and there were a number of memorable highlights, on which I’ll look to build on in the coming season. I’m looking forward to Barcelona, and driving the new FW41 for the first time.”
Sergey Sirotkin added; “To say I’m happy and proud to join such a famous team like Williams is an understatement.  It took a huge amount of work to get where I am, and I’m really happy and thankful to everyone involved. The result of our combined efforts has helped me achieve my dream, and rest assured the team can rely on me to deliver my best.”
Claire Williams, Deputy Team Principal said; “After an extensive driver evaluation process, I am thrilled to have our 2018 line-up finalised, and I’m excited to see what next season brings. We have taken our time to evaluate all the available options, and I’m confident Lance and Sergey can deliver the best results for the team. The Williamsphilosophy has always been to promote and develop young talent and Sergey fits right into that ethos. Lance has had a record-breaking debut season, and with a year now under his belt, he will be ready to hit the ground running in 2018. We have a talented driver line-up for 2018, that we are confident will deliver some exciting results for the team.”
Paddy Lowe, Chief Technical Officer, added; “We have conducted a rigorous and exhaustive driver evaluation process. Ultimately, Sergey impressed the team with his driving pace and talent, technical feedback and work ethic, both at the factory and trackside in Abu Dhabi.  I’m delighted he will be joining the team to partner Lance next season. Lance will be going into his second season with us, after notable achievements in his rookie year.  We have an exciting line-up for 2018 which we believe will help us to maximise the potential of the FW41.”