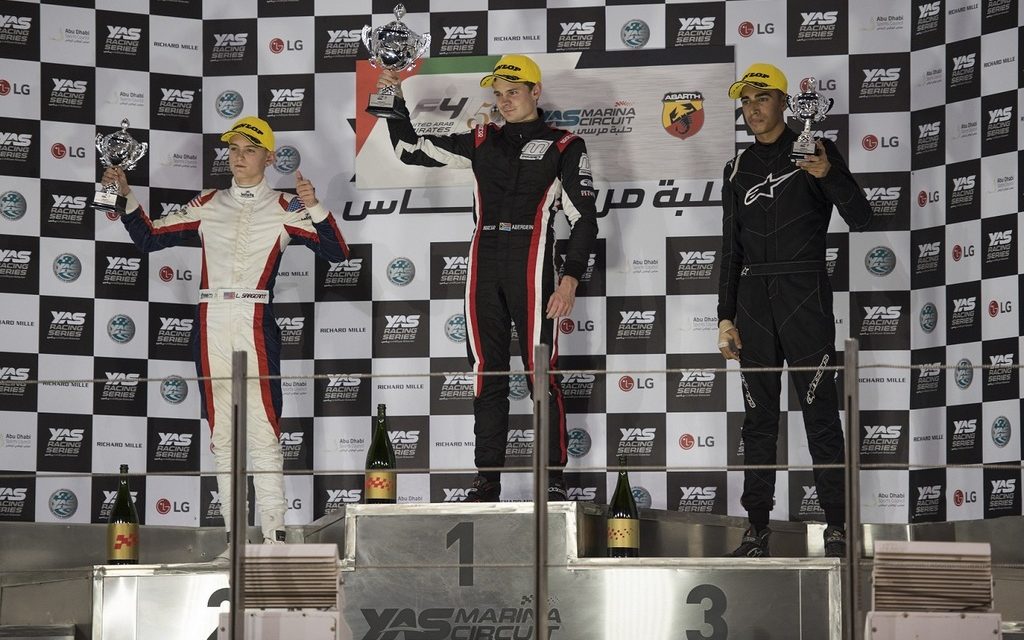 Considered one of the most important additions to the United Arab Emirates’ local motorsport calendar, F4UAE is the first of its kind in the MENA region for developing young driver talent.

Boasting a field of mostly young drivers who were new to circuit racing, the Team Motorpark duo of Jonathan Aberdein (#21) from South Africa and Logan Argeant (#23) from the USA proved unbeatable as they finished first and second respectively in all three trophy races. While the QMMF F4 Team of Ahmad Al Muhannadi (#22) and Abdulrahman Tolefat (#20) from Qatar were the fastest of the GCC competitors head of the UAE’s Saif Ben Sulayem (#3) who before this weekend had only ever previously participated in three karting races.

“The first F4UAE non-championship Trophy Event was a great start. Preparations, testing, and practice went very well, and everyone was so excited. We are very proud to see our UAE and other GCC teams doing a great job during this weekend and we look forward to see them racing for the Championship next month in Dubai,” said ben Sulayem.

The category’s first outing at Yas Marina Circuit – the Home of F4UAE – gave competitors their first opportunity to race at speed in the Middle East ahead of a busy Championship season that runs through until March 2017.

The Trophy Event began with sanctioned testing at Dragon Racing’s Motorsport Wednesdays event, where teams were able to give their drivers extra seat time and their engineering team additional preparation time ahead of Thursday’s four official 45mins practice sessions.

With only one driver in the field having previously raced F4 internationally – multiple race winner Jonathan Aberdein from Team Motopark – all other drivers had come straight from karting and used the non-championship Trophy Event to help settle into the requirements of open-wheeler racing and learn the skills required to be successful ontrack during the coming season.

In qualifying, the Team Motopark duo topped the time sheets with Aberdein clocking a best lap time of 2 minutes 12.572 seconds around the 5.5km Formula 1 circuit, while Ricky Donison (#9) from India qualified third fastest in his first ever F4 event but was well looked after by the Energy Dubai F4 Racing Team; a team with a strong history of successfully fostering young karting talent in the UAE.

Between the three races, the finishing positions remained the same as qualifying across the board, however with unique battles among each session. Race 1 saw Tolefat and Ben Sulayem make great efforts in fighting for position alongside each other in their open-wheeler debut. Race 2’s start saw Sargeant initially stalling on the grid before making up five positions to finish second. While in Race 3, Tolefat and Ben Sulayem came together with only minor damage, bringing out the Championships’ first safety car period.

Richard Cregan from Rasgaira, the team responsible for engineering all GCC entered cars this weekend, praised the young drivers for their maiden performance.

“The guys have done really well and we must remember that they don’t have a lot of race experience and certainly none in this category,” said Cregan. “They’ve improved over the whole weekend, their times, their starts, and most importantly they’ve improved their understanding of race craft. They need to be doing the Motorsport Wednesday testing before each race weekend and that will help them improve very very quickly.

“But a I’m very happy with how the weekend went, and a big thank you to the ATCUAE for bringing F4 to the UAE. I think it’s a huge step in training young drivers for the rest of their career and they are so keen to get back in the car. They’re keen to go testing, and we need to develop that spirit and racing passion.”

Winning team manager Timo Rumpfkeil from Team Motopark said that despite his team claiming the race wins, his drivers benefitted hugely from the non-championship F4UAE event.

“Logan is the reigning world champion in karting but even he has to go through all the new things like his first start, first qualifying, first opening laps, first safety car… we had eveything,” said Rumpfkeil. “And for Jonathan it was a different kind of track, with sand and different grip levels, and it was also good for him to learn a new tyre which helps make a driver stronger in the long run. So for us it has been a positive event and all the drivers improved over the weekend, so now we are looking forward to the first championship event in Dubai.”

The F4UAE Championship will officially begin with the point-scoring Round 1 being held at the Dubai Autodrome from November 18-19. The grid will also see the addition of the local Dragon Racing team and GDL Racing from Europe, among other team announcements to be made in the coming weeks.

Report submitted by Automobile and Touring Club of UAE