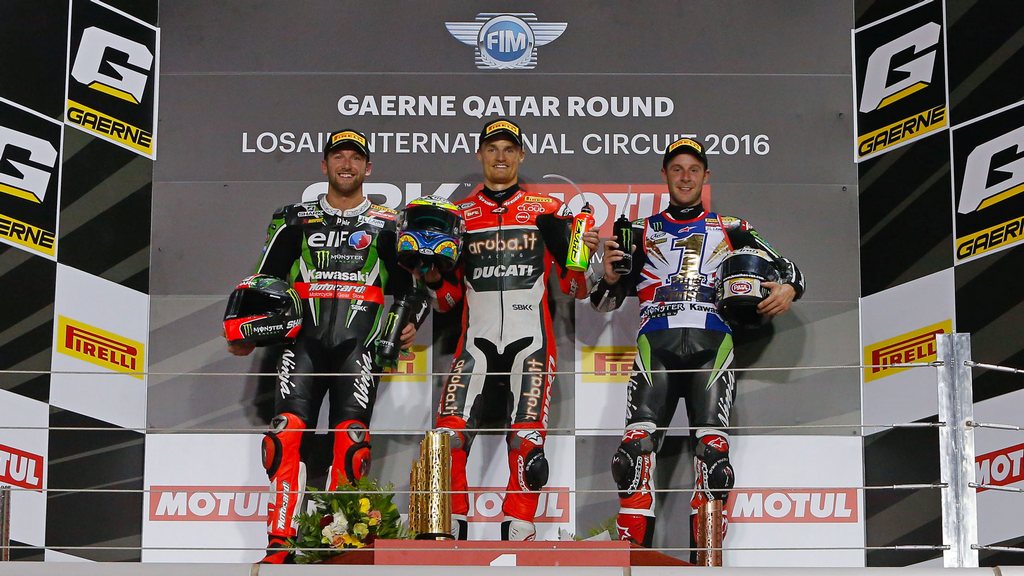 Sun Oct 29th 2016 – The final race of the 2016 MOTUL FIM Superbike World Championship had it all; Ducati dominating proceedings, a Pedercini Kawasaki flaming inferno and an admirable show of team spirit by the current World Champion. Chaz Davies (Aruba.it Racing- Ducati) shattered the competition from beginning to end, even after the race was restarted. Tom Sykes (Kawasaki racing Team) was given a ray of hope when his teammate and newly crowned World Champion, Jonathan Rea (Kawasaki Racing Team) let him pass on the final corner to take second and the overall runner-up spot.

Rea and Davies dragged each other off the start into the illuminated first corner, fighting for the lead. Davies got ahead but Rea was quick to retake control at the front. Lorenzo Savadori (IodaRacing Team) and Alex Lowes (Pata Yamaha Official WorldSBK Team) ran wide into the first corner together, while Honda World Superbike Team’s Nicky Hayden had to start the race from the pit lane after an early evening engine change exceeded his season’s allocation.

Entering the first corner of the second lap, Rea ran into trouble running off track as Davies got ahead, setting the fastest laps. The Kawasaki rider rejoined in P13 and immediately began attacking to recover positions. With the Welshman away in front, Sykes made a dash to catchSylvain Guintoli (Pata Yamaha Official WorldSBK Team) who was promoted to second after Rea ran off.

Leon Haslam (Pedercini Racing) had a good pace, reaching a respectable fifth place from P16 on the grid, before Saeed Al Sulaiti’s Pedercini Kawasaki caught fire, just as the Qatari had reached P15. The race was red-flagged while the track marshals cleaned up oil spilledfrom Al Sulaiti’s bike.

After fifteen minutes, the race restarted for a ten-lap dash to decide the final victor of 2016. Davies and Sykes shot to the front maintaining their first and second positions, while Rea recovered his poor restart, to set a new lap record on his hunt towards the front.

Before long it was a KRT battle for second as the teammates pushed each other and overtook each other at every opportunity. On the final lap, Rea put on an incredible show of team spirit and slowed right down to let Sykes- who had fallen three seconds behind- to catch up and take second, to secure the runner-up spot in the Championship.

After a thrilling finale, WorldSBK will now recharge their batteries before the new season return to Phillip Island in February in 2017. Until then, stay up to date with the latest news and videos on WorldSBK.com.
Quotes from the top three riders:

1st place
Chaz Davies (DUCATI): “Winning these last six race in a row I’ve kind of proved a point. I’ve proved that the Panigale is a competitive championship package, as we knew it was when I signed a few years ago. I have proved to myself that I can win more than just one race at the odd track and we have had 11 wins, six in a row, it’s been incredible. It is something special and it is not easy to achieve one double, let alone three in a row. So hats off to Ducati, all my team have done a fantastic job this year, they have never stopped believing me and have always been looking for the next level.”

2nd place
Tom Sykes (KAWASAKI): “It was solid enough. I was missing some pace but I just focused on the race but the red flag was sure difficult. I missed a lot of time on Friday with some brake problems and never really rode the bike to 100%. We suffered on the front end but what can I say. In the race in the first part I was setting myself up for the long distance, so I didn’t push so hard at the beginning to save the tyre. In the restart I knew we were a little bit in trouble because we have missed some pace all weekend. I dug deep and had good initial speed but Jonathan pushed hard and was going for the win and I could see what was happening. He was closing Chaz down and Chaz was responding. It was a fantastic gesture by the other side of the garage to do this you know. I am quite speechless and being a gentleman I really, really appreciate this kind of gesture. I will remember it until I am very old. We have lost championships in the past from team orders from other manufacturers so to have this and for it to gift us second in the championship, a one-two for Kawasaki in the championship. It has been a heck of a season for Kawasaki!”

3rd place
Jonathan Rea (KAWASAKi): “The red flag saved us and starting again from ninth I was completely pumped to make a good race. The pace was good, I felt really good on the bike and then on the last lap I knew that barring a mistake from Chaz I knew that there was no way that I could get through cleanly so I played the clever game. I knew the maths and wanted to be a team player. Without team orders, speaking inside the team like gentlemen I knew that it was more important for the big picture that we have a one-two. So I am very happy for myself because I have achieved my target. I am happy for Kawasaki with the one-two in the championship because I think it is the first time. I am also happy for Tom because he has played a key role in Kawasaki’s success. Thanks to everybody. I am looking forward to going home now to recharge my batteries, but I enjoyed that race!”

The desert arena that is the Losail International Circuit, hosted the final showdown of the 2016 MOTUL FIM Superbike World Championship on the 28th-30th October. Jonathan Rea was crowned World Champion for an incredible second consecutive time on Saturday, in Race 1. It was a special achievement for fans to bear witness as WorldSBK hasn’t seen a consecutive title winner since Carl Forgarty won, back to back in 1998 and 1999. Starting his title defence off with a double win at Phillip Island in February, the 29-year-old Northern Irishman defended his crown in Qatar after an incredible season that saw him claim 9 wins, 23 podiums and two pole positions. He was presented with his  2016 Superbike World Championship trophy by Mr Enrique Aldana, COO-CFO of Dorna WSBK Organization. Kenan Sofuoglu won the 2016 FIM Supersport World Championship for a fifth time, cementing his legendary status in WorldSSP history. He was crowned in Jerez and his season has seen him achieve 9 podiums and 6 wins.

The 2016 Riders’ Champions were celebrated on the 30th of October in a live Prize Giving Show in front of the entire WorldSBK Paddock and fans present at the Losail International Circuit. Joining Jonathan Rea and Kenan Sofuoglu on stage were the Tissot- Superpole winners, Pirelli Best Lap winners and Manufacturers’ winners of both classes.