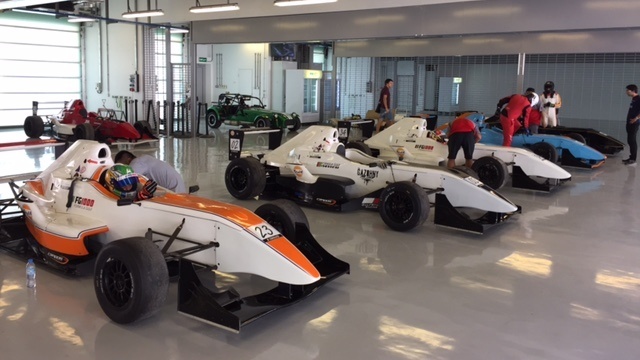 Oct 29th 2016 -As is customary, GulfSport Racing organised its first Academy event as a pre-season test at the billion dollar GP circuit on Yas Island. The new intake of young drivers met with Andy Pardoe, who would be their personal driver coach for the next six months and Fred Jacobs who advises them on their fitness program. Racing backgrounds may vary, but all share one objective; gaining the skills and knowledge required to become a successful professional racing driver. Just like any other profession, training and education is not an option.
Formula Gulf partner Campos Racing, who run professional drivers in F3, GP3 and GP2, again entered one of their contracted rookie drivers, Viktor Lysenko (Russia) who will commute from Moscow to attend the Academy program in order to prepare for an FIA F4 campaign in 2017. Viktor initially got acquainted with his 186 bhp single seater formula car on the short and relatively simple North Circuit on Thursday before taking on the challenging 21 turns of the full Grand Prix Circuit on the Friday. After driving some 300 kms on track during which he practised hard braking and clutch-less gear changes into corners some 700 times, his progress was good and he continued to reduce his lap times.
Fastest driver of the weekend was Omar Gazzaz (KSA). Returning for a second season in the Academy, his aim is to win this prestigious national championship in order to attract sponsorship from companies in Saudi Arabia that will enable him to  compete in an FIA F4 championship in 2017. As expected, Omar set benchmark lap times which gave the new drivers a realistic goal throughout each session.
The surprise for observers, of which there were many, was the stellar performance of 17 year old  Saeed Al Ali (UAE) a well known local Rotax kart racer. Although Saeed has been kart racing for 6 years, his ability to run consistently within a second of Omar’s lap times was astonishing. “ I managed to get behind Omar and just followed him around.” Clearly a very quick learner! Saeed finished the last test session just six tenths of a second off Omar’s fastest lap of 2:15.179.
Also putting in a mighty impressive performance was Indian schoolboy Nabil Zakir Hussain who lives in Dubai. His limited experience was more than made up for by intelligence and focus and by the end of the second day he met the lap time objectives set by Andy Pardoe.
Dutch motorcycle racer Eric Goedhart joined the group simply to experience the unique opportunity to drive a real racing car on the fabulous Grand Prix Circuit, which included sessions under bright lights in the evening. It remains to be seen if Eric will switch his allegiance.
After creating and running a successful sports racing car championship for Radical Sportscars (UK) in the Gulf from 2005 to 2009, GulfSport were invited to run Russian driver Sergey Shalunov (Arloid Racing) in the Radical Middle East Cup. Team Boss Gary Francis prepared and ran the car over the weekend with Sergey, who were rewarded with a victory in the first round of the championship and another podium finish in the second race the following day to lead the championship going into the next event in Dubai next month.
Race 1 and 2 of the Formula Gulf Championship gets underway on the 18th November at the Dubai Autodrome.