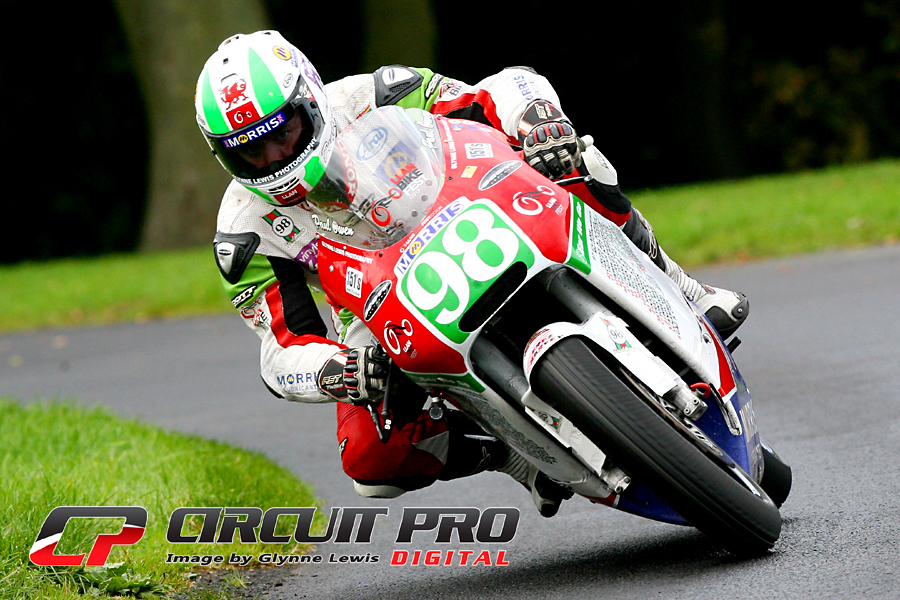 Paul on his classic FZR 750 Yamaha at the Spring Cup

Every year the winter period can seem a long and tedious time but alas all is not as it appears as bikes are rebuilt and refreshed, an expensive and time consuming period so the winter time is ideal, as I found out when I caught up with Welsh Road Racer Paul Owen.

Paul Also gave me an insight on how his 2016 season had progressed from a fine start to a low in the middle and finishing off in style.

It’s a day and night job returning home after a full season of racing and to strip and refresh your machines as well as expensive you have to be meticulous in every detail.

Burning the midnight oil is common place as the darker nights are with us and time flies by, checking every nut and bolt along with frame of each  bike is a must do prior to the next seasons racing, then there’s the refresh for the engines an expensive time of year for anyone.

A track day at Oulton Park in Cheshire was the ideal place to go being the closest circuit, the Yamaha FZR750 classic superbike was flying and passing many modern superbikes, so back to the workshop for a swap of engines to the refreshed and rebuilt engine.

Second test was a track day at Anglesey race track and with the new engine in the Yamaha FZR750 taking it steady to run the engine in, after a few laps and having found the potential from the 2nd engine (Tuned by Pete Alton at O.C.T. Dyno centre), the RS250 Honda was next and the little 2 stroke engine was screaming and on pace.

Olivers Mount National Spring Cup in Scarborough was the first race event and Paul took to the track and was back into winning ways with pole position and continued his 1st place success from 2015 on the RS250. Having gained a front row start and finished 3rd on the 750cc classic superbike in the 1300cc open F1 race, sadly the meeting was cut short due to a serious accident involving a fellow competitor.

Paul’s 2nd event was back in Scarborough for the June event, having claimed pole position again and taking 2 wins on Saturday morning aboard the RS250cc Honda, the next outing was aboard his classic Yamaha FZR750 in the modern 1000cc superbike race, on the first lap he was involved in a fast crash and was hit from behind at 140mph, hitting the ground hard, Paul unfortunately collected the rider in front as he flew through the air like a rag doll.

All three riders needed medical assistance but Paul was up and about in a few minutes, Paul didn’t take to the track further that day but made the effort on Sunday as he doesn’t like to let his fans and sponsors down.

Having struggled in the first race and even though he was leading had to relinquish his lead to finish in 2nd place due to the injuries he had sustained the day before and was unable take part in any further action that weekend.

Two days later Paul visited his doctor and was told he had a hematoma bleed in his left calf muscle, a strained ligament and tendon to a badly twisted left knee, a bruised lung a cracked rib, soft tissue damage and whiplash to his neck.

Still suffering with the pain not receding two weeks later Paul went for a x-ray on his neck only to find out that he had more damage than first thought, with some damage to C4, C5 and C6, but he was more shocked when the doctor asked him how long ago did you break your neck in two places, Paul was baffled as he said he has never broken his neck.

It just goes to show how determined road racers are to get back on a bike after injuries and crashes not knowing the full extent of their injuries due to the adrenalin in their bodies.

With a lot of thought and deciding to take a break for 6 weeks to heal properly and get back to race fitness, his next event was in Ireland for the international Ulster GP, Paul was back up to pace and qualified in 3rd place in the 250 race, he battled for the lead but on the final lap he dropped to 4th place and just missed 3rd by 1 second at the finish line. Paul then travelled to the isle of man for the classic TT, still suffering with the neck injury he managed to qualify in 3rd place, the race was a fast pace with Bruce Anstey breaking the existing 250cc lap record, previously held by John McGuinness, Bruce Anstey went on to win the race from Ian lougher in 2nd and Phil Harvey in 3rd followed closely Paul on-board his 23 year old Honda RS250.

Paul’s next race was on the classic superbike, but after a gruelling 250 race, he was struggling with his fitness and ongoing injuries struggling to keep the Yamaha FZR750 on the racing line, clipping curbs and hedges Paul decided to play it safe and retire from the race.

The final race of the year and returning to Olivers Mount for the Gold Cup international road races on both bikes was to become somewhat of a fitting end after a disappointing year. Taking pole position again on the Honda RS250 with 3 wins, a 2nd, 3rd, and 4th including fastest lap, plus winning the Phil Mellor Memorial Trophy for the second time in his career, as you can imagine Paul was delighted and smiling again, especially as Olivers Mount had been where all his problems had started earlier in the year.

Now the winter season is almost back on us again Paul can’t wait for the 2017 season to start which will be his 26th year of racing.

Paul would like to thank his family for their support (Wife Deb, Son Thomas and his Dad) Including his friends, and sponsors without whom it wouldn’t be possible for Paul to get the race results he does…

All the members of the #98 club

Paul will be continuing the #98 club so anyone interested in sponsoring him please contact him on paulowen98@live.com