WSBK: WorldSBK riders take a tour through traditional Doha ahead of this weekends finale 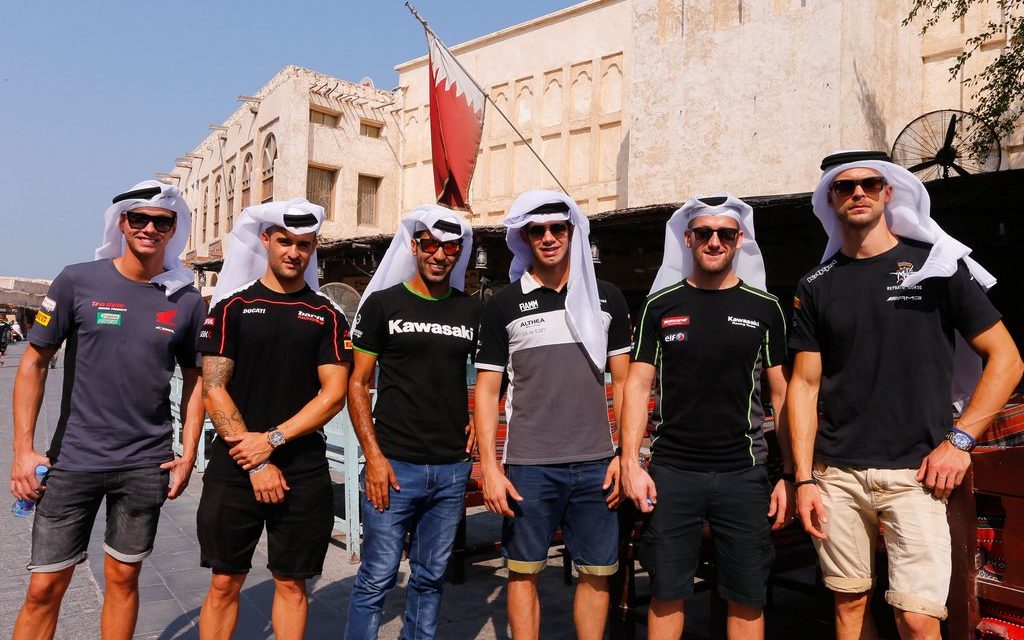 WorldSBK riders try something new in the SouqWaqif

First stop was the Falcon Centre where the riders admired the regal hunting birds perched on display. Al Sulaiti explained that the wild falcons were trained to hunt from a young age and that all the birds on display had already been sold except for the one they were holding. Torres was the first to jump at the opportunity to hold the falcon, petting the wild creature in front of the media and onlookers. A nervous looking Fores was next to hold the wild hunter and was relieved when Camier asked to take it next. The Brit took the opportunity to get a selfie with the falcon before all the riders gathered together to get a photo with the amazing bird. They then strolled through the winding narrow pathways of the traditional Souq, taking in the sweet scents of spice and perfumes filling the air. Al Sulaiti directed the riders to a traditional coffee shop where they settled for a quick pit stop. They drank Arabic coffee with dried dates and the customary Tahania dip. Once refreshed and refuelled, they continued on their Middle Eastern journey through Qatari culture.

The final stop was a small shop hidden in the shadows of the bazaar selling traditional men’s headwear. Al Sulaiti explained the different components of the headdress and then showed everyone how to put it on. Once the riders were fitted for their own, they took AlSulaiti’s lead and attempted it for themselves.

They emerged into the middle of the Souq for one last photo opportunity together, all wearing the traditional Gahfia and Ghitras. Then it was back to the circuit for final preparations ahead of Free Practice on Friday the 28th October to kick off the final weekend of WorldSBK for 2016. Thursday kicks off the Middle Eastern adventure when some of the Stars of WorldSBK go on a tour of the famous Souq Waqif. Tom Sykes (Kawasaki Racing Team), Michael van der Mark (Honda World Superbike Team), Leon Camier (MV Agusta Reparto Corse), Jordi Torres (Althea BMW Racing Team) and Xavi Fores (Barni Ducati) will have a guided tour of the Souq by none other than Pedercini Racing rider and local man Saeed Al Sulaiti. They will be off to explore the traditional market at 12:00pm and return to the track at 14:00 local time (GMT+3) for final preparations ahead of lights out on the weekend.

Track action begins on Friday afternoon at 16:30 with WorldSSP leading the way in the first session of Free Practice. Later on, both WorldSSP and WorldSBK will take to the track to decide entry to Saturday’s Tissot-Superpole 2 sessions. Just like at the European Rounds, the Paddock Show will provide live commentary and viewing from the stage all weekend thanks to the giant screens provided.

Saturday’s on-track thrills begin with WorldSBK riders getting in one more practice session at 15:30 before WorldSSP take to the track straight after. Then, grid positions will be decided in the Tissot-Superpole shoot-outs starting at sunset.

Race 1 will see lights out at 20:00, while Randy Krummenacher (Kawasaki Puccetti Racing) and Luke Stapleford (Profile Racing) commentate live from the Paddock Show. On-stage activities begin at 21:00 to 22:00, with the WorldSSP Qualifying show, the WorldSSP Meet ‘n’ Greet and the WorldSBK Qualifying and Race show.

Sunday Warm Up begins at 17:00 with pit lane opening at 18:00 for the pit walk. Don’t miss your chance to meet your favourite WorldSBK riders at the Paddock Show at 18:45, before they take to the grid for the final time in 2016.

WorldSSP will see the final standings decided when the lights go out at 19:15 before the final showdown of WorldSBK takes place at 21:00. Race 2 will feature guest commentary from Jules Cluzel (MV Agusta Reparto Corse) and Hikari Okubo (CIA Landlord Insurance Honda), live from the Paddock Show. That’s not all for the weekend though, at 23:00 local time the Paddock Show welcomes everyone with paddock passes to the Official Prize Giving at the End of Season Show, to join in on celebrating with the season’s Champions.

For the first time, the Paddock will feature a motorcycle dealer expo; a food corner with a variety of international cuisine available and WorldSBK merchandise shops, while spectators arriving on motorbikes will have exclusive parking inside the Paddock, regardless of their pass.

Go Karting will be open throughout the three-day event from 16:00 until 22:00 to satisfy your need for speed, with 15-minute sessions costing QR 100.

Tickets are still available for the Gaerne Qatar Round, which promises a weekend of unforgettable action in the steamy Arabian desert. Three-day Grandstand tickets are QR 100 and allow access to the Paddock for the first 2,000 guests. They can be purchased on the WorldSBK website.

With an incredible line up of activities to keep fans entertained at Losail as well as on-track action that is sure to excite, the final Round of the 2016 MOTUL FIM Superbike World Championship is set to be a sizzler in the Qatari desert on the 28th to 30th of October.