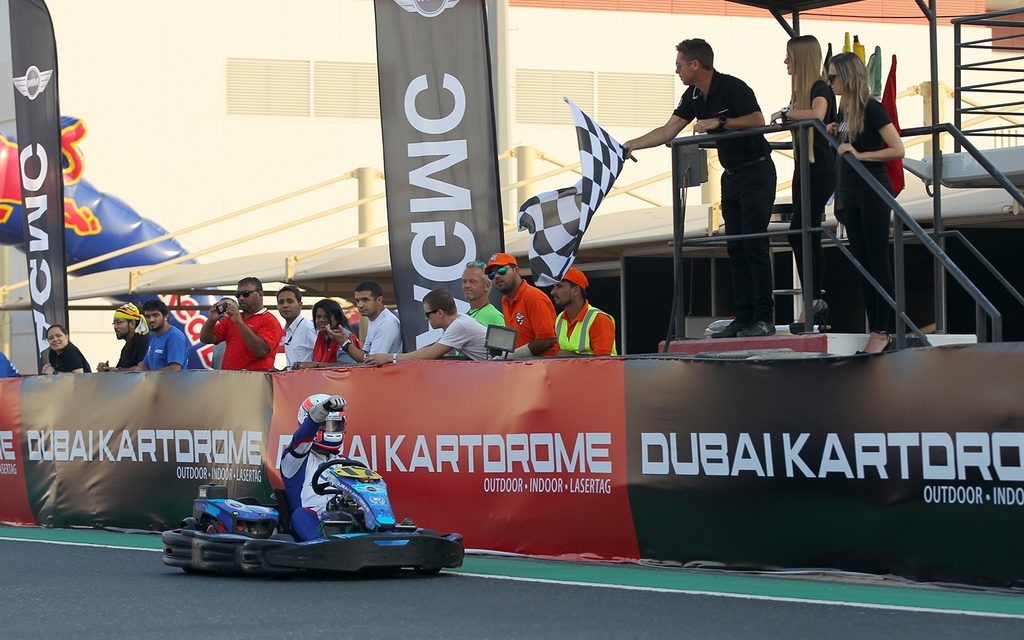 CG Pro crosses the line after 700 Km of racing

Dubai, UAE, 22 October 2016:  CG Pro continues to dominate the endurance leisure karting world with a convincing Round Three victory at the Endurance Championship Driven By MINI at the Dubai Kartdrome on Saturday morning.

CG Pro was the first team to reach the required 700 kilometres distance on the outdoor circuit, seeing the chequered flag after 583 laps and over 12 hours of intense racing.

Jam-packed with confidence after winning the Endurance Cup at the 2016 SWS World Finals in France this summer, CG Pro took command at the Dubai Kartdrome despite losing out during qualifying to long-time rivals BatelcoDrag965 Racing.

Pole position belonged to BatelcoDrag965 Racing but it was quickly lost as CG Pro made the most of the famous Le Mans-style start of the race and grabbed the lead immediately.  However, a series of small strategy errors and a penalty dropped CG Pro down the field and after the first hour BatelcoDrag965 Racing was back in control, followed by Bin Drai Karting Team and Globcom-Flame.

The opening hours on Friday night were scrappy and punishing as drivers jostled for position and then settled into a groove.  Two title contenders, LD and Mach1, got caught up in the early mayhem and were pushed to the bottom of the pack, and both teams spent the rest of the race clawing their way up back into the top ten.

In the middle of night CG Pro began to make their move.

CG Pro Team Captain David Terrien said, “We felt we were back in the game after about three o’ clock in the morning when we managed to close the gap on Batelco.  We thought we still had a chance to win but with this kind of race with such tough competition, you don’t know what can happen.”

Better pit stop strategy and improved lap times brought CG Pro back into play, step by step.  By the end of the 700 kilometres the team was in top form, crossing the finish line a full 48.626 seconds ahead of BatelcoDrag965 Racing.  Last year’s Endurance Champions, Dubai Falcon Racing Team, claimed the remaining spot on the podium.

With only one round remaining, CG Pro leads the 2016 Pro Rankings with 115 championship points.  BatelcoDrag965 Racing is still in the hunt at 110 points and Mach1 holds on to third with 86 points.

In the Corporate Rankings, Fly Emirates 1 got a huge boost to its championship ambitions with a sensational victory in Round Three.  The crew finished several laps ahead of two Choueiri Group teams, CG Racing and CG Academy.

The Emirates Group Karting Club entered three teams into the championship but on the final 24 hours round in December it will put all of its efforts into its top ranked team, Fly Emirates 1, with the hopes of avenging a second place finish in the Corporate category back in 2015.

LD made up for a dreadful start to take first place in the Nations Cup.  Amid opening lap chaos the Russian contingent was booted to the back of the grid but made an incredible comeback throughout the twelve hours to claim eighth position overall by morning.

This earned it top spot in the Nations Cup for Round Three, just beating out the Indian line-up ENOC-NH8 for second and another Russian squad, Strizh, for third.  LD now leads the 2016 Nations Cup Ranking ahead of ENOC-NH8 going into the last race.

The fourth and final round of the Endurance Championship Driven By MINI will take place on 16-17 December 2016 at the Dubai Kartdrome.