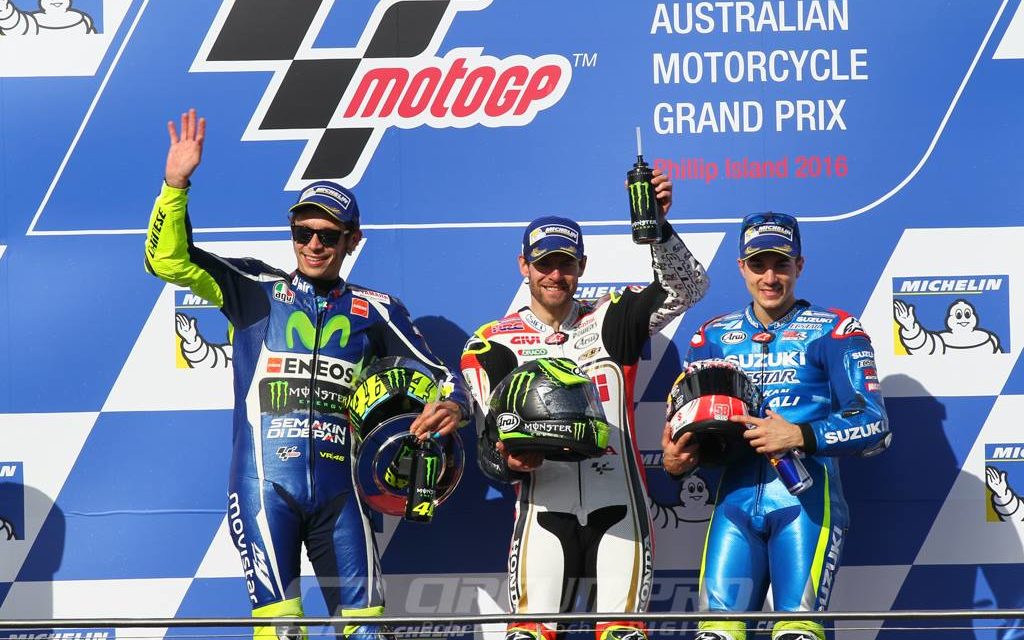 There were no miracle starts for those frontrunners starting further back for the Australian GP, with Jorge Lorenzo (Movistar Yamaha MotoGP) getting the best from P12 to move up to P9, and teammate Valentino Rossi gaining two places to P13 – with Maverick Viñales moving up only one. It was Pol Espargaro (Monster Yamaha Tech 3) who got the holeshot from P3 on the front row, with polesitter Marquez the biggest loser off the line – before the 2016 MotoGP™ World Champion swept back around the outside of Doohan Corner to take back P2 and then fight off Espargaro through Lukey Heights and down into T10. Once at the front, the Motegi and Aragon winner set off in his rhythm, soon seconds clear.

#35 Cal Crutchlow – 1st-“I was terrified when Marc crashed out in front of me, I braked really weakly into that corner for the whole race. I knew it was critical, because I crashed there from second a couple of years ago when I had a ten-second gap behind me, so I was quite scared to be honest. With that in mind, I also knew I had to keep pushing because otherwise I would lose heat in the front tyre.”

“I was actually quite confident that I could have caught Marc today, but once he crashed I just carried on at the same pace and then the last ten laps or so I didn’t really push, I just made sure I kept heat in the front. I actually pushed more on the laps when the sun wasn’t out, because when it was I could be a little more relaxed. It might sound strange, but this is Phillip Island and anything can happen.”

“I’m really pleased for the LCR Honda Team, they have done a great job this weekend. I was confident I could have won even with Marquez in the race, but Honda have done a really good job with our bike, there’s no doubt about that. We can now look forward to the last two races, and then see what happens for next year.”

The fight for P2 between Crutchlow and Aleix Espargaro (Team Suzuki Ecstar) saw the Brit emerge on top, as Rossi was charging through the field – picking off Pol Espargaro and Andrea Dovizioso (Ducati Team) as the rider from Tavullia entered podium contention, then setting his sights on Aleix Espargaro and soon getting past.

Valentino Rossi – “This morning we discovered that we had a good pace in good conditions and step by step I came back. At the beginning of the race, the first lap was very funny and I tried and hoped to go to Cal, but he was too fast and too strong. The first ten laps I enjoyed a lot. Cal was also my target and I thought that I could beat him because this morning I was a bit stronger. When I saw Marquez crash I thought I might be able to win and tried but unfortunately Cal was too fast. He is always very fast in Phillip Island and interprets this track in the maximum way. For me the second half of the race was more difficult and I couldn’t make a move, but this race is what we needed after the mistake in Motegi and the bad day we had yesterday, which I think was the most frustrating day of the season. It was a very positive day for the team and Yamaha and it’s been a positive race. Congratulations to Cal and thank you to all my team, to all the guys who did a great job.”

Nearly three seconds clear at the front, there was suddenly a Repsol Honda sliding through the gravel at Turn 4 – and Marc Marquez was out of the Michelin® Australian Motorcycle Grand Prix.

Maverick Viñales: 3rd – “This podium has a very good taste to it, the weekend had been very hard this morning, but finally I was happy when I woke up today and saw the sun. We had very little time to finalise a set-up for the race, but finally the machine was very good to me and the tyre choice proved to be the right one, allowing me to recover and go for the third. I only had to be careful in the very early stages of the race because not having had the time to test the tyres I was not totally sure the front would support me, but after two or three laps I realised I could trust it. My pace was very good, I’m sorry for Aleix’s crash because we were having a strong race and we had a good pace. At the end, I also thought I could catch-up for second place, my pace was good enough to do it, but unfortunately I’d lost too much time in getting from sixth to third and the race was gone. Anyway, I’m really happy with the result, I want to thank my team because they did a very good job having such a short time to prepare.”

Crutchlow then found himself in the lead, hoping the 2014 flashback for Marquez wouldn’t touch him after a last lap crash two years ago – as Rossi began his hunt for the LCR machine, over two seconds back but on an amazing roll from P15 on the grid. As the British rider continued pulling away, Rossi then got a warning shot at Turn 4 that saw him run deep and lose ground, as the new fight for the final podium spot saw Aleix Espargaro locked in battle with Dovizioso – and Viñales soon getting involved.

After swapping positions in a three-way fight, Turn 4 then claimed another victim as Aleix Espargaro lost his Suzuki machine with 5 laps to go, and teammate Viñales broke the resolve of Dovizioso to take the final place on the podium and head the Italian home.

After his storming start, Pol Espargaro took a solid result as he crossed the line in P5, ahead of a struggling Jorge Lorenzo – who was unable to make up big ground after his good launch off the line.

‘Kentucky Kid’ Hayden, standing in for injured Dani Pedrosa at Repsol Honda, put in an impressive one-off return to his 2006 championship winning colours as he battled well within the points, before Miller took Turn 4 a little overenthusiastically and Hayden was the casualty, sliding out.

Hector Barbera was another crasher, leaving Redding to lead compatriot Bradley Smith over the line for P7, with the top ten completed by Petrucci and Miller. As well as the solid result for Miller, fellow Australian Mike Jones scored a point on his Avintia Racing machine, impressing once again.

Another Independent Team win in 2016, another win for Cal Crutchlow, and a little glimpse of the old Marquez. A fight back from outside the top ten to make the podium – for both the bikes who crossed the line behind the Brit – and some spectacular racing at Phillip Island once again. Next up is he penultimate round – and another chapter of an incredible 2016.

The pitlane opens in Malaysia at 9:00 local time (GMT +8) on Friday as the grids gear up for a fresh clash at Sepang International Circuit.