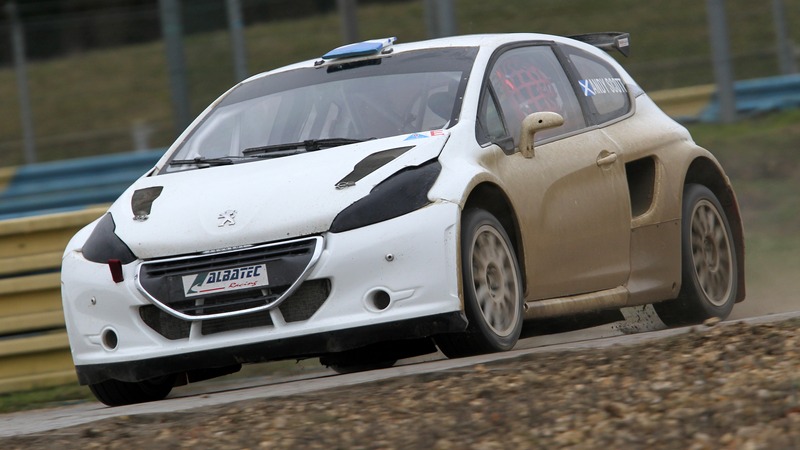 Villeneuve will pilot one of the team’s fearsomely fast 600bhp Peugeot 208s..

Feb, 13th 2014 – The new-for-2014 FIA World Rallycross Championship presented by Monster Energy has added a former Formula 1 World Champion to what is an increasingly competitive driver line-up for its inaugural campaign, with Jacques Villeneuve signing up to compete in an Albatec Racing-prepared Peugeot 208.

The 42-year-old has committed to a full season with the Dumfries-based squad, which has experience of fielding ‘big name’ drivers after running FIA World Rally Championship star Kris Meeke at Lohéac in France last year and testing erstwhile Ferrari ace Mika Salo in a private session in Finland.

Villeneuve will pilot one of the team’s fearsomely fast 600bhp Peugeot 208s, and Martin Anayi, Managing Director of FIA World RX for IMG Motorsport ­– a division of IMG, the global sport, fashion and media company – welcomed the announcement as another major endorsement of the nascent Championship’s burgeoning profile and popularity.

“The news that Jacques Villeneuve is joining the FIA World Rallycross Championship for its inaugural season is a tremendous coup,” said Anayi. “It is massively exciting for everybody involved in the Championship and for all of our fans. It will be great to see World Champions from different disciplines battling it out in FIA World RX. “As a former F1 World Champion, Indianapolis 500 winner and IndyCar Champion, Jacques is a true motorsport legend, and his on-track achievements and off-track personality have earned him cult status all around the world. We have no doubt that he will thoroughly enjoy his new rallycross challenge, and that fans all around the globe will revel in watching his spectacular style behind the wheel of one of our flame-spitting, 600bhp Supercars.”

The son of French-Canadian motor racing idol Gilles Villeneuve, Jacques shot into the spotlight by winning the 1995 IndyCar World Series and iconic Indianapolis 500, prior to crossing the Atlantic to join the grand prix grid. Two years later, he was crowned F1 World Champion, tallying 11 race victories over the course of a glittering top flight career. He remains the only active racing driver to have lifted all three prestigious trophies.

Since hanging up his F1 helmet, Villeneuve has gone on to compete in NASCAR, the Le Mans 24 Hours, the Andros Trophy ice-racing series and Australian V8 Supercars. Whilst FIA World RX will be a new discipline for him, he arrives in the Championship boasting vast experience across the motorsport spectrum – and judging by his scintillating raw speed straight out of the box during a test outing with Albatec at Dreux in France, he is certainly not taking the challenge lightly.

“I am really looking forward to entering the rallycross arena with Albatec Racing,” said Villeneuve. “With my previous ice-racing experience, I’m excited about driving sideways in a 600bhp, four-wheel-drive Peugeot 208 over the combination of loose and tarmac surfaces, not to mention the jumps. With the added incentive of it being an FIA World Championship, the opportunity was really too good to miss.

“We had a very successful test in France. I was very impressed with the quality of the team, particularly on the engineering side – it reminded me of my time in F1. The car is just so responsive, the power is amazing and with 600bhp to play with, who wouldn’t be excited? I was pleasantly surprised by how reactive the car is to any changes, and I’m very much looking forward to getting into the events.”

Since entering rallycross last season, the fledgling Albatec Racing team has notched up numerous heat wins across Britain and Europe, and secured a dominant overall Supercar victory in its last race of the year, the final round of the British Rallycross Championship at Croft. Now the pairing of Villeneuve, alongside Team Principal Andy Scott, 2011 British Rallycross Vice-Champion, brings the team high hopes of delivering some strong results amongst a class field of the best rallycross racers in the world.

“I am delighted to welcome Jacques to the Albatec Racing team,” said Scott. “He brings with him a wealth of experience and an outstanding pedigree across all disciplines. He is renowned for his technical excellence and ability to drive any car to its limit, and I was very impressed with how quickly he got to grips with the car in France. I am very eager to see how he settles into the 600bhp Peugeot 208 during his debut year in rallycross.

“Rallycross itself is moving into a very exciting phase, and the new FIA World Rallycross Championship offers a fantastic commercial opportunity for the team.”

The opening round of the 2014 FIA World Rallycross Championship will take place at Montalegre in Portugal over the weekend of 3/4 May, with Villeneuve set to entertain his home fans at Trois-Rivières in Québec on 7/8 August.