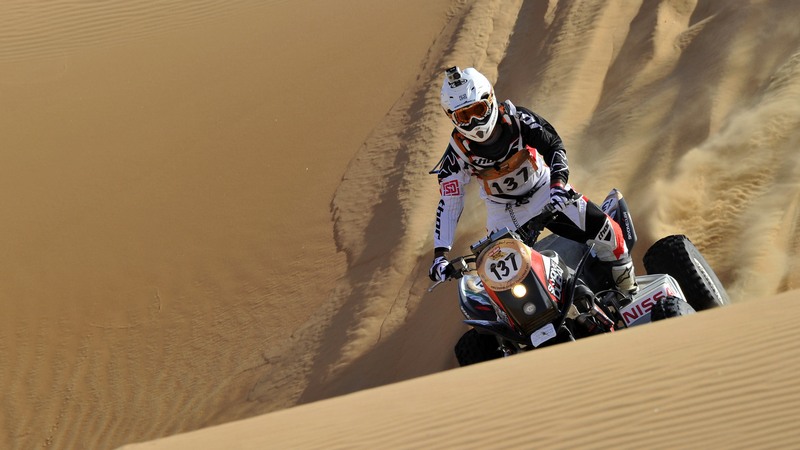 Dubai, UAE 11 February, 2014: Top Emirati drivers and riders face a tense battle this weekend in the fourth round of the UAE Desert Championship, with 12 national rally titles still up for grabs.

Driving a Polaris RZR XP, Ahmad Al Maqoodi has a double title target in his sights as he leads both the buggies and overall cars divisions, although he could come under pressure on Friday from Mansoor Al Helei.

Lying just four points adrift in second place in the cars division, Al Helei will be going all out for victory in the new national rally series in a Nissan Patrol.

Another Emirati driver, Ahmed Al Fahim, still has a mathematical chance of topping both the cars and buggies standings and will be looking for a big performance this weekend.

Organised by the Emirates Motor Sport Federation, with TAG Heuer Middle East as the official timekeeper and founding partner, the UAE Desert Championship is run with the support of the Automobile and Touring Club of the UAE, the national motor sport authority. “We’re very happy with the way the championship has run in its first season, and especially with the response from the UAE rallying community,” said ATCUAE President Dr. Mohammed Ben Sulayem, the FIA Vice President.

“We set out from the beginning to safeguard the future of rallying on a national basis, and also to capitalise on the UAE’s natural assets for the staging of cross country events.

“It’s been an excellent start, and I’m confident that the championship will continue to grow. We look forward to an exciting finish to the season at the weekend, with so much at stake in the final round.”

Emirati rider Mohammed Shamsi already has the look of a champion in the quads category, but like Al Maqoodi, cannot afford any major mistakes or misfortunes. He holds an 18-point lead over Colin Mercer, with another Emirati rider, Humaid Al Mashghouni, also still in the title race.

Despite having contested only one of the three previous rounds, the UAE’s multiple Arab motocross champion, Mohammed Al Balooshi, still intends to make his mark on the Desert Championship.

After finishing third in the previous round behind Dakar Rally stage winner Sam Sunderland and overall bikes class leader Sean Gaugain, Al Balooshi has set his sights on a fourth round victory.

With practice prohibited, the route for the short track rally, running in the Al Yufrah 2 desert area south of Dubai, will be revealed to competitors on Friday morning before the cars, buggies, bikes and quads go into action between 9am-11am.

The event doubles up as a valuable opportunity for competitors to prepare themselves and their rally machinery for the 24th edition of the Abu Dhabi Desert Challenge taking place from April 3-10.