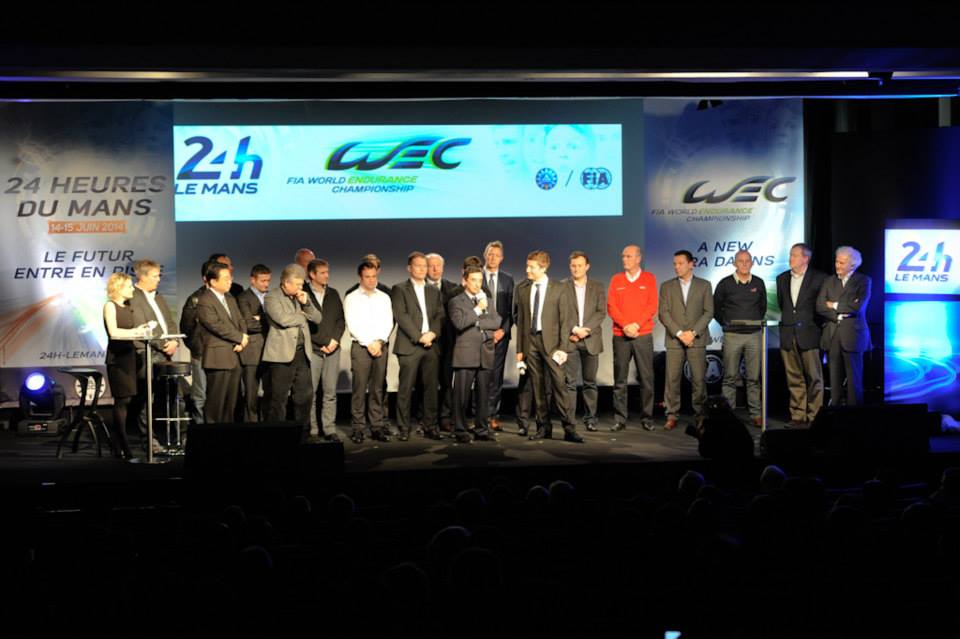 Henceforth, the Le Mans 24 Hours has a new visual identity thanks to the new logo designed by the Leroy Tremblot agency. An event like the Le Mans 24 Hours is based around a central dimension – its legend. And this legend has been carefully forged since 1923 thanks to four sacrosanct values: innovation, popularity, performance and variety. These four values can be found in the new logo, which also transforms the identity of the event to a brand concept.

This new sign replaces a logo that dates from 1978 and it coincides with the introduction this year of new technical regulations for the Le Mans blue riband category, the LM P1’s.

The cars entered in LM P1 will use 30 percent less fuel and make a big reduction in their carbon footprint, while maintaining a level of performance equivalent to that of the cars competing in 2013, thus guaranteeing the race the same nail-biting intensity while using different technologies. Never in the history of motor sport has a set of regulations gone so far to take into account the challenges which our society has to cope with linked to sustainable development.

The major manufacturers have got it right. Thus, in addition to Audi and Toyota, Porsche, which was totally won over by this approach, is making its comeback to the Le Mans 24 Hours 14 years after its last outright victory. Nissan has entered its ZEOD in the context of the 56th garage (place on the grid granted to a technically innovative prototype running outside the overall classification) to prepare for its return to LM P1 in 2015.

In terms of numbers the reigning title holder Audi holds sway with three of its new R18 e-tron quattros to which two Toyota TS040s and two Porsche 919 Hybrids will provide fierce opposition.

In the LM P1-L category reserved for private teams Rebellion Racing and Lotus have entered a total of three cars.

In LM P2, 2014 will be marked by the return of Ligier, one of the great names in French motor sport, back in top-level racing joining Alpine, which has confirmed its entry. It is the first time that Ligier will return to Le Mans since 1975. This year two cars developed by Onroak Automotive will be at the start. Another comeback of note is that of Dome, and Sébastien Loeb Racing will finally take on the best endurance has to offer. The 9-time world rally champion will not be behind the steering wheel but will be present as team manager.

In LM GTE Pro the Corvette C7s and Viper GTS-Rs are determined to take their revenge on the European GTs led by the works Porsches, the current title holders, the works Ferraris entered by AF Corse, the Ram Racing 458, plus the three Aston Martin Racing V8 Vantages. A no-holds-barred battle between the manufacturers of the most beautiful GTs in the world looks on the cards.

In LM GTE, sixteen cars will be at the start including last year’s winner, the IMSA Performance Matmut Porsche.

Among the drivers in the GTE Am category making their debut will be Fabien Barthes, the 2013 French GT Champion, who has made a remarkable reconversion to motor sport. American actor Patrick Dempsey is back for the third time after coming close to victory last year.

The breakdown of the 56 cars invited to take part in scrutineering and admin. checks is as follows: 10 in LM P1 (7 in LM P1 H reserved for manufacturers, plus 3 in LM P1 L for private teams), 17 LM P2s, 12 LM GTE Pros, 16 LM GTE Ams and one for the 56th garage: in other words an exact parity of 28 between prototypes and GTs.

Ten reserves ( 5 LM Ps and 5 GTEs) have been selected to replace any withdrawals.

The Le Mans 24 Hours race is an international one par excellence and the teams will represent 12 different countries (13 if the Malaysian squad on the reserve list makes it to the grid) with drivers from 18 different nationalities.

Note that the Endurance Pyramid of which the pinnacle is the Le Mans 24 Hours has played its role to the full.

Out of the 56 cars entered for the Le Mans 24 Hours, 31 are also competing in the FIA World Endurance Championship, 20 in the European Le Mans Series, 7 in the Tudor United Sportscar Championship in North America and 4 in the Asian Le Mans Series (these statistics include the reserves).

This press conference also provided the opportunity to present new partners who have put their trust in the Le Mans 24 Hours, as well as fresh initiatives on the part of others.

Shell has become the official supplier of fuel for the Le Mans 24 Hours and the FIA World Endurance Championship.

Michelin, which has sponsored the broadcasting in live streaming of the conference, has launched a new trophy, the Michelin Total Performance Award aimed at speeding up innovation in both racing and in the field of mobility. RTL, the leading radio is now the official Le Mans 24-Hours radio.

Pierre Fillon, President of the Automobile Club de l’Ouest: “After celebrating in style the 90th anniversary of its favourite event in 2013, the Automobile Club de l’Ouest is writing a new chapter in the history of the race in 2014. It has a new logo, a new set of revolutionary regulations for the blue riband LM P1 category, new entries with the return of prestigious makes like Porsche and Ligier, and new partners known worldwide. The fascination exerted by the Le Mans 24 Hours is greater than ever before. It’s the guarantee of an event in which this year, more than ever before, technological innovations, respect of sustainable development, top level sport and immense popularity combine.”

Vincent Beaumesnil the Automobile Club de l’Ouest Sports Manager: “The field for the 2014 Le Mans 24 Hours is without doubt one of the greatest in the event’s history. In the LM P1 category the arrival of Porsche in addition to Audi and Toyota and Lotus plus the entry of the new Rebellions prove the validity of the new technical regulations introduced this year. Once again the biggest grid can be found in LM P2 and all the teams at the start are in a position to battle for victory given the evident quality of the entries. In GTE Pro, five manufacturers continue to put their trust in us and have entered the 2014 racing versions of their most beautiful road-going GTs. In GTE Am, the category that has progressed the most, the open nature of the regulations attracts more and more private teams. Making a choice among the entries was a really difficult task because of the quality of all the applications received by the ACO from all over the world!”

Free for young people born after 15th June 1998 accompanied by an adult.