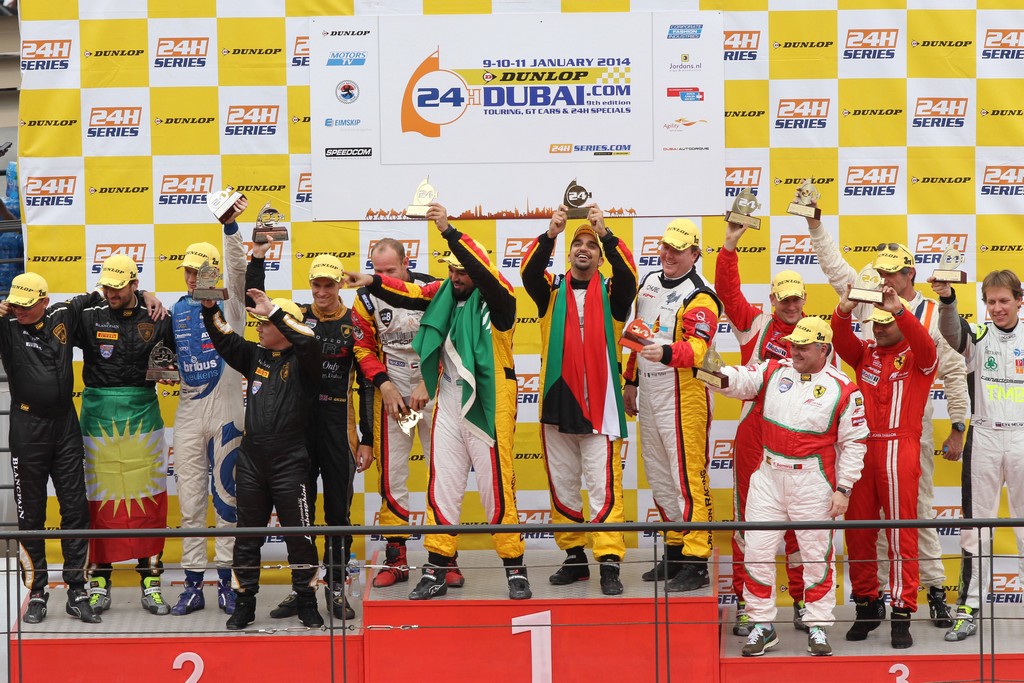 This was the ninth year running of this annual 24hr race, it is regarded as one of the most prestigious events in the calendar, with the largest grids of over 80 cars starting the race this year.

His Highness Sheikh Juma Bin Maktoum Al Maktoum waved the UAE flag at 2:00 pm on Friday at Dubai Autodrome to flag off the cars competing in the Dunlop 24 Hours of Dubai, shortly after the entire grid stood for a minute of silence for race winner Sean Edwards, Allan Simonsen, and Khaled’s team also had thier own personal tribute on the car to support Michael Schumacher.

During the 24hr non-stop race Khaled’s Dragon Racing team, in car #888 completed 586 laps of the Autodrome International circuit and made a total of 19 pit stops over a time of 1hr 15s to achieve the win. The team were second fastest overall in that pit time, with the driver changeovers, tyres and refueling procedures, only 3 seconds off overall race winners Stadler Motorsport Porsche.

“I can’t believe it“, commented Khaled post-race. “We were targeting a clean finish with no impact damage and we wanted to keep our car out of any trouble, we never made initial plans for the win, but as we progressed through the hours, we all soon realized we had built up a credible pace with the other top cars in our class and we all felt very comfortable racing the car at that pace. We decided in the last remaining hours of the night to see if we could strategize for this and we made some adjustments in our calculations which worked out really well and put us in a good position, by daybreak this morning to start to push harder for the win”.

“By the time we looked at our watches in the morning we knew we had to take the chance and with a bit of luck and our fingers crossed we hoped we could dare to think about even being on the podium, let alone win the race, you can never relax and we were all tense as our competitors behind us and in front had seconds between us all, for the last few hours it was quiet a nail-biting experience for everyone.”

“I managed to complete about eight hours of driving in total, over both night and daytime and I have to admit the night shift stints were a little hair-raising at times as the track is in complete darkness and all you see are the headlights, closing speeds of the Ferrari compared to other class cars was challenging to get used to at first but after an hour you soon get comfortable and know what to expect after a while”.

“We didn’t have any accidents only a few body rubs which is to be expected and the car ran faultlessly but we were all shocked to learn of our sister car #88 withdrawal that was damaged heavily, so we owed it to all the guys to try to get the podium as we all had worked so hard to get here”.

Khaled completed a total of eight hours driving during the race and he and his team managed to set consistent fast laps around the 2m 5s mark, this time was the fastest lap time allowed by the cars in the Pro-Am class and was a crucial defining strategy for the class win. However the cars ahead in the Pro category were allowed to race as fast as possible and were lapping at least 5 seconds faster per lap.

I really want to thank my fellow drivers and the entire crew from Dragon Racing who made it all possible and my management team with whom I have worked so hard over the past years towards this aim, It’s a team effort and without them or the support network from friends and family it would not be possible to achieve such goals, so thank you,” commented an emotional Khaled after the race.

Khaled now has his sights set firmly on a repeat of the same success in further endurance races on the calendar aswell as European Le Mans Series and selected events such as Le Mans. Khaled aims to work with his management team to nurture other young racing drivers to take up the sport under a unique new driver management and training programme to be announced soon.

Was that Leclerc or was that Maldonado?

This fake. Saw a car drive through the ferrari.

Imagine all of you getting angry over a bit of fun 🤦‍♂️

Is that Vettel in the ferrari?!🤣😂