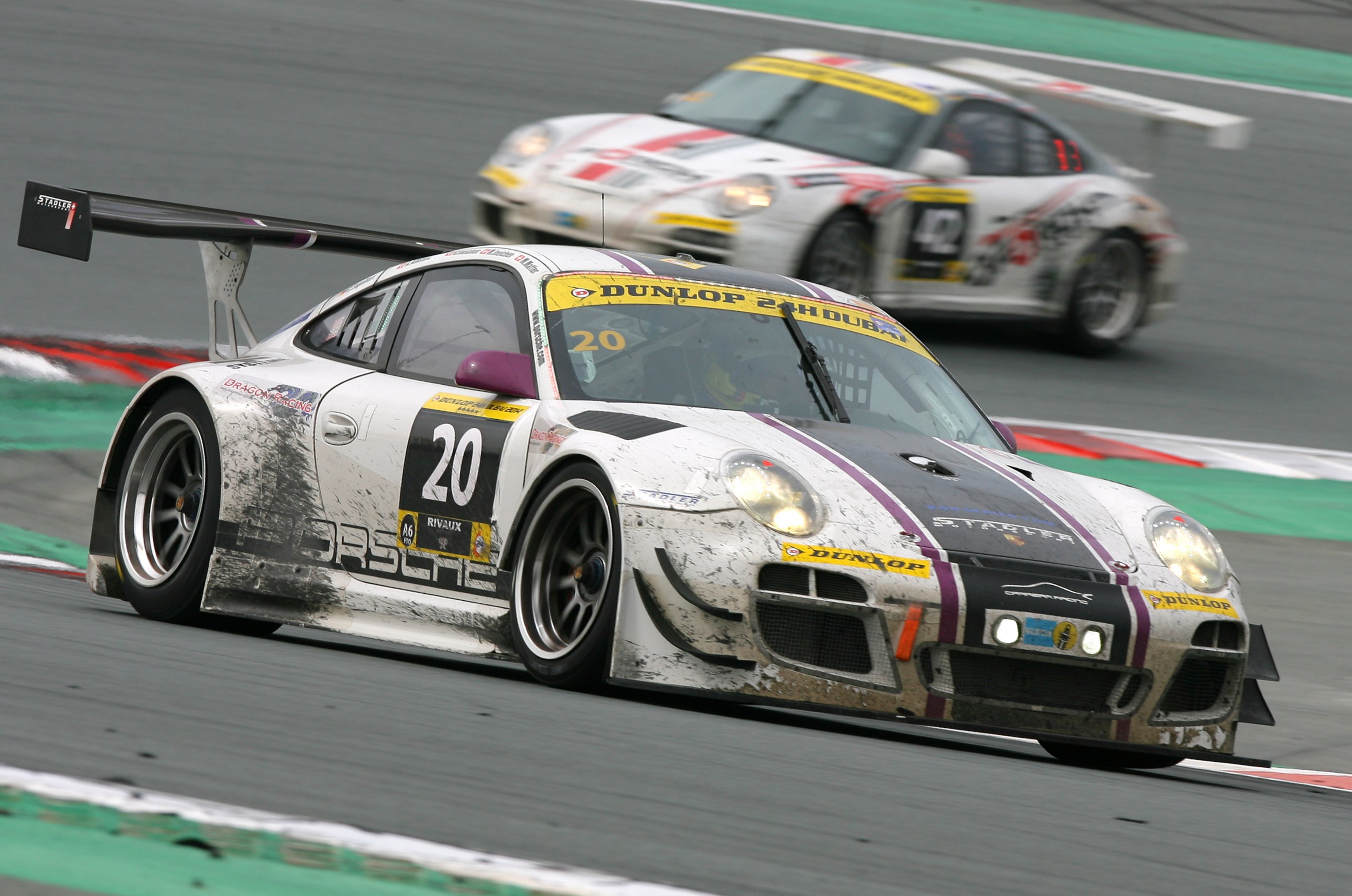 Dubai – 11 January 2014-Stadler Motorsport Porsche team tore up the form book as they powered to victory in the 2014 Dunlop 24 Hours of Dubai after a dramatic race which saw twenty lead changes and nine different teams enjoying spells at the front, but when it mattered the Swiss team managed to find the edge and hold on it when they crossed the line after 603 laps and over 3000 kms. The ninth edition of the event, which took place on 10 and 11 January at Dubai Autodrome, was held under the patronage of His Highness Sheikh Hamdan bin Mohammed bin Rashid Al Maktoum Crown Prince of Dubai and Chairman of the Dubai Sports Council.

Mark Ineichen, Rolf Ineichen, Marcel Matter, Adrian Amstutz and Christian Engelhart shared the driving in the Porsche 997 GT3R, racking up 603 laps of Dubai Autodrome on their way to the chequered flag. After the team received the winner’s trophy from His Highness Sheikh Juma Bin Maktoum Al Maktoum, Ineichen said, “This is incredible. It was a great race. We recovered from a practice accident. We drove steadily and when it mattered we took command. Although it was very tense throughout because there some big teams chasing us. We kept it together and we won. It is a fantastic victory for our team.” The victory, in a race with 27 lead changes among nine teams, saw Porsche end Mercedes’ two year spell at the top of the podium at this annual Dubai race. Second place went to the Munnich Mercedes SLS AMG GT3 shared by Rene Munnich, Marc Basseng and Rob Huff were second overall, and three laps behind the winners.

Local hero Khaled Al Qubaisi led the Black Falcon Mercedes SLS AMG GT3 team to third place, with Jeroen Bleekemolen, Abdulaziz Al Faisal, Hubert Haupt and Adam Christodolou sharing the driving duties. Al Qubaisi was also on duty in the sister Team Abu Dhabi by Black Falcon Mercedes, which he and Bleekemolen shared with Bernd Schneider and Andreas Simonsen. The squad led for most of the the first half of the race, but at around midnight electrical problems forced the car in for repairs, and eventually the team retired the car.

Thereafter they focussed all their efforts on the number two car and third place was the reward for their efforts Al Qubaisi reflected, “To be honest it’s a consulation for the team. It is not what we came here for, but considering all the problems we had during the course of the race, even with the second car, third place is a good result. These things happen in a long race so it is out of our hands.” There were emotional celebrations in the Dragon Racing garage after their number 888 Ferrari powered to victory in the prestigious A6 Pro-Am Class. The team, campaigning the Ferrari 458 Italia GT3, played the classic ‘tortoise versus the hare’ tactic to beat some of the more formidable outfits and claim a famous triumph on their home circuit. Jordan Grogor, Khaled Al Mudhaf, Frederic Fatien and Mohamed Jawa performed to a remarkably consistent and rapid pace throughout the race and took the lead with a couple of hours to go where they remained to the end. Their presence on the podium drew the largest cheer of the day.   Second in the A6 Pro-Am class went to the Lamborghini Gallardo of Oliver Webb, Isaac Lopez, Jan Stovicek, Yoshiharu Mori and Jeroen Mul.

It was heartache for the other UAE based entries with the Lap57 Honda, SVDP Racing BMW and the Memac Ogilvy Duel Racing Seat – the trio sidelined during the race, all while comfortably leading their respective classes. The Honda suffered a suspension failure, the BMW blew an engine and the Seat was retired after the gearbox broke.

Dubai Autodrome general manager Richard Birch said, “This was a race of high attrition as the pace among the top teams was akin to a sprint racee, especially early on in proceedings. But in the end Dubai Autodrome delivered another epic endurance race, which attracted more race fans then ever before.”   “I thank our partners Creventic for their efforts and applaud Dubai Shopping Festival, Dubai Sports Council and the Dubai Department of Tourism & Commerce Marketing who contributed greatly to the success of this event,” added Birch.

One Grand Prix victory, but enough memories to last a lifetime! 🏆

Watch ten classic races for FREE which saw riders stand on top of the podium for the only time in their careers! 🥇 ... See Less

I won’t lie..... I was in bits watching this race live on TV I love Damon

Good for them hard work does pay off🏁🏁🏁🏁🏁