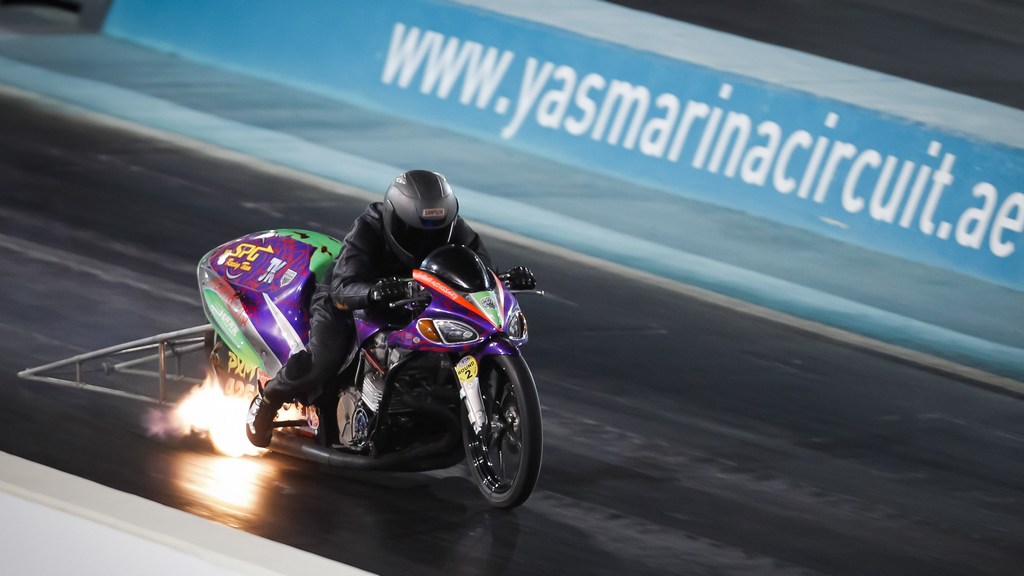 Abu Dhabi, UAE, 24 December 2012: The thunder of engines and smell of burning rubber returned to Yas Marina Circuit this weekend with the start of a new season of the Pro Drag Racing Series.

Round one of the series – now in its third year at Yas Drag Strip – kicked off with qualifying rounds on Thursday, December 20, followed by race day action on Friday.

A big crowd saw Emirati racers Sultan Al Zaabi, Khalil Al Ansari and Rashid Bin Tamim in action in the Pro Modified category, the fastest of the six classes taking part and the main draw in the evening’s entertainment.

It was Al Ansari who streaked away from Al Zaabi in the final with a time of 3.94 seconds, more than a second faster than Al Zaabi’s 5.18 seconds.

Pre-race hopeful Bin Tamim clocked impressive times in the eliminator stages, but saw his hopes dashed in the semi-final when he false started.

“The whole team is disappointed because we had excellent times in the qualifiers,” he said.

Al Zaabi, who won last season’s Pro Modified series, said: “I had gear box problems in qualifying, but my crew was great and we were confident. We just weren’t quick enough in the final.”

A delighted Al Ansari was thrilled to get the season off to a winning start, but said he would have enjoyed a showdown with Bin Tamim.

“His early pace was very good,” said Al Ansari. “It would have been close between us.”

Dozens of professional drivers and motorcycle riders from all over the GCC were in action across six categories – Pro Modified, 4.8 Index, Pro Bike, Super Street Bike, Pro 6 and Super Street 8.

A crowd of varied ages and nationalities enjoyed the racing thrills and spills, which included the usual smoking tires and deafening engines, but also engine blow outs, oil spills, and drivers swerving dangerously close to the drag strip retaining walls. It was the Pro Modified series they came to see. The cars are carbon fiber replicas of American muscle cars and use nitrous oxide to add horsepower to the engines, allowing them accelerate from 0-60mph in less than a second – quicker than a Formula 1 car. They are capable of speeds above 300mph.

Yousif Al Sayegh, Manager of the Yas Drag Racing Centre, said it was good to have drag racing back at Yas Marina after last season ended in May.

“It’s a very popular sport in this region and we’re seeing the amount of interest grow every year,” he said. “We had some delays with oil spills on the track, which we had to make sure were cleaned up properly for safety reasons, but we enjoyed some great racing.”