Dubai 24hr: Teams ready for the eighth edition of the Dubai 24hr with strong 85 car grid 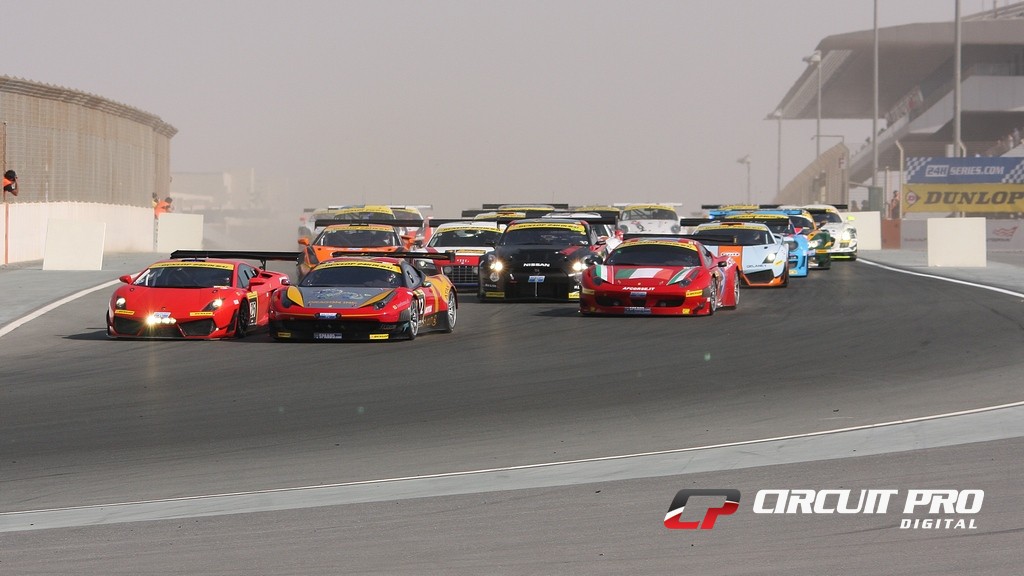 Jan 2nd, 2013 – While the racing action for the 2012 season has finally come to an end, preparations continue at full speed for the eight edition of the Dunlop 24H DUBAI (January 10-12, 2013). This coming week teams will deliver their cars and equipment in Dubai where 85 cars are underway to Dubai Autodrome Circuit for the first international endurance race of the year for GTs, touring cars and 24H Specials.

The provisional entry list for the eighth running of the Dunlop 24H DUBAI, online at www.24HDubai.com, can rightfully be called impressive. Ex-F1 driver Jean-Dénis Deletraz, former DTM champions Bernd Schneider and Kurt Thiim, ‘Ring legend Sabine Schmitz, Le Mans winner Guy Smith, two times’ Supercup champion Jeroen Bleekemolen (also a class winner at Le Mans) will all be on the grid for the 2013 race. But the Dunlop 24H DUBAI is not just about the big names, as there are also plenty of amateur teams and drivers, for which participation in the endurance event is the highlight of their racing season.

The participation of Claudia Hürtgen, Dubai race winner in 2011, runner-up in 2009 and third in 2010 will battle with Jeroen Bleekemolen to become the most successful driver in history of the Dunlop 24H DUBAI. A member of the winning team of 2012, Bleekemolen finished runner-up in 2008. Currently, the winners’ list is led by Austrians Dieter Quester and Philipp Peter, who won both in 2006 and 2007, but if either Bleekemolen or Hürtgen win in 2013, they claim the top spot based on a higher number of total podium finishes. Once again, the team of Radio Show Ltd, the people behind Radio Le Mans, will be on site to provide expert commentary, interviews and analyses, which can also be heard online at www.radiolemans.com. The 2012 Dunlop 24H DUBAI got no less than 4,172 hours of air time on television in Europe, North America, Central and South America, the Asia Pacific region, Africa and the Middle East, including 750 hours of live broadcast. Live radio and internet coverage at www.radiolemans.com also attracted a huge audience with almost half a million listeners. Media coverage is expected to increase even further for the 2013 running of the race as the event is becoming more and more significant in international motor racing. No less than 84 cars have been entered for the race.

Further details about the 2013 Dunlop 24H DUBAI, including time schedule, entry list and broadcasting times, can be found at www.24HDubai.com. During the event, coverage with live timing and latest news can be found at live.24hseries.com. and on twitter at http://twitter.com/24hseries

What is the Dunlop 24 Hours of Dubai?

The 24Hours of Dubai is both a sports car and a touring car automobile endurance race held annually at the Dubai Autodrome. It was inaugurated in 2006 and serves as a one of the ultimate tests for both the endurance of the driver and machine. The race starts at 2pm on Friday and ends 24 hours later at 2pm on Saturday. The race features both a variety of Grand Tourer (GT), touring cars as well as specially built silhouette cars from a wide range of marques which are eligible to enter. These range from small-engined Super 2000 hatchbacks to racing-bred sport cars. This will be the seventh edition of the 24 Hours of Dubai race in the UAE.

Where do the drivers come from?

The race is open to both professional and semi-professional drivers and teams. There are both local competitors from the UAE and surrounding nations in the Persian Gulf as well as a host of international teams from Europe, Australia, South and North America. Ninety international teams with over 400 drivers and 2000 crew members from every corner of the globe will descend on Dubai for the event.

What other activities are usually going on during the event?

For fans, admission is free to watch this world-class event with access to the amphitheater and the grandstand, and visitors will also be allowed in the paddock to get a first hand feel of the excitement and meet drivers and see the teams at work. Also in the paddock will be a myriad of activities for children and families with food and beverages throughout.

What can fans expect during the race weekend?

A huge field, some of the fastest exotic cars around, close racing and arguably one of the most spectacular starts imaginable: 80 cars hurtling into Turn 1. There will be a great variety of food and beverage outlets in the paddock with a typical UAE heritage village set up in the same area.