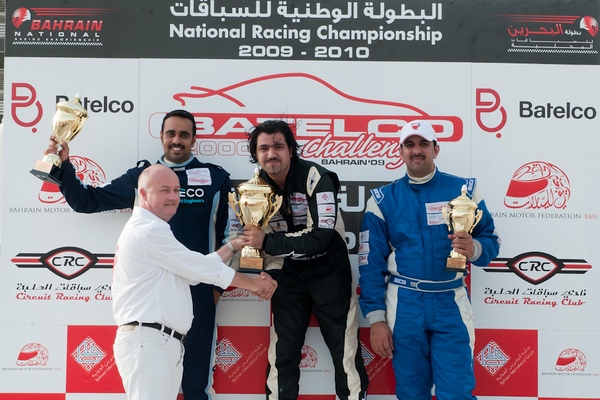 The exciting Batelco 2000cc Challenge came to a thrilling conclusion this weekend when  Mustafa Al Khan clinched a dominating victory in race one of the eighth and final round of the season. Shaikh Salman Bin Isa Al Khalifa blistered across the finish line in race two, adding valuable points to his championship placing. The event was attended by spectators and motorsport fans from across the Kingdom as Bahrain’s most popular local racing series came to an adrenaline pumping end. The practice session kicked off the final round of the successful local racing series, with the competitors taking to the inner circuit to prepare for the most important two races of this year’s season. A. Rahman Ghuloom sped ahead and made the most of the track time, achieving a lap time of 1:19.439 in his Honda Civic. Shaikh Jaber Al Khalifa was not far behind in 1:20.097, while Raed Himmo pushed his Honda CRX to the limit on the third lap to get a best time of 1:20.142. The remaining competitors took a more relaxed approach and saved their cars’ performances for the qualifying and official races, which would be held later on in the day. Mustafa Al Khan led the qualifying session with a remarkable second lap performance, giving him the pole position on the starting grid. Hamad Al Khalifa trailed by one second to qualify in 1:18.391, setting him up next to Al Khan for the first race of the round. Raed Himmo repeated his practice session performance and finished in third with a time of 1:18.641, not far off Shaikh Hamad’s own timing.

Mustafa Al Khan claimed the checkered flag in the first race in 21:29.703 and sped around the desert circuit to also finish with the fastest lap time of 1:17.814. Shaikh Hamad Al Khalifa clinched the runner up position in his Honda Civic with a time of 21:29.100, while Shaikh Salman Bin Isa Al Khalifa closed up the podium with a time of 21:39.850.

The second race of the round witnessed a determined Shaikh Salman fight off Al Khan to cross the finish line more than seven seconds ahead of the rest of the pack. In an impressive display of driving ability, Shaikh Salman sped ahead and gained important seconds with some flawless driving technique. Al Khan followed in second with a time of 20:06.364 and Stephen Kellogg came in third at the 20:23.999 mark. With the conclusion of this year’s season, Mustafa Al Khan finished at the top of the table and claimed yet another Batelco 2000cc Challenge title, adding to his Championship win the previous year. Claiming a total of 135 points, Al Khan’s season was full of obstacles, but he managed to overcome all of them and narrowly beat out the competition for the overall crown. Shaikh Salman Bin Isa Al Khalifa followed in second with 130 points, finishing ahead of Shaikh Hamad Bin Isa Al Khalifa by five points. Shaikh Hamad clinched the fastest lap of the season, with a remarkable time of 1:17.058.