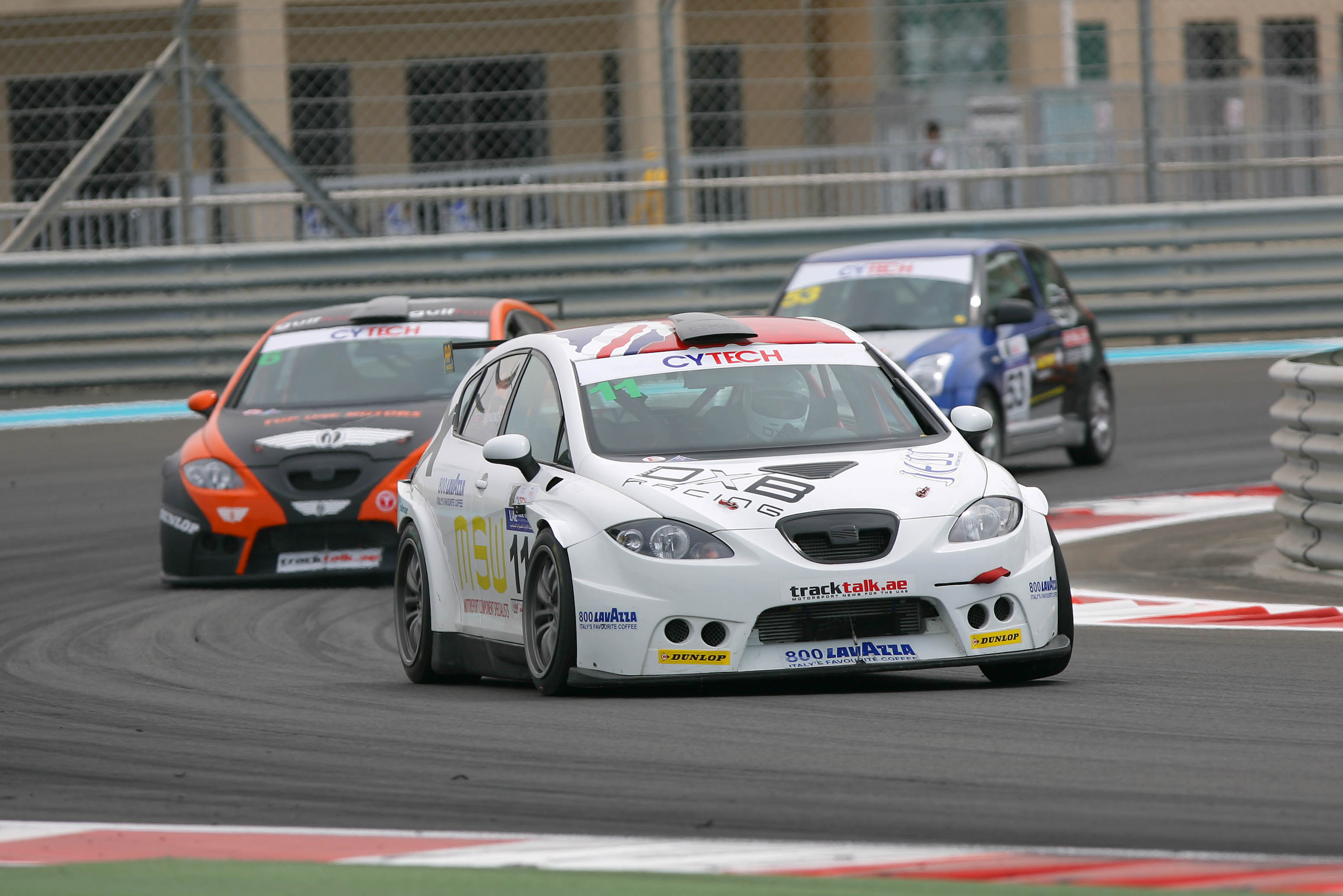 Simmo in his MSW colours

For those who have followed the 2009/10 UAE Touring Car Championship as I have, you can not fail to notice the ever present and stunning machinery from the DXB Racing Team; with the likes of the Seat Leon, an awesome Viper and the ‘one of a kind’ Mitsubishi Evo, all resplendent in the familiar black & white livery. Battling bumper to bumper in both the touring car & GT series, they have become regular visitors to the podium, picking up a sizeable haul of trophies this season and, who would bet against them taking a few more next season.

I caught up with the head honcho, Jon ‘Simmo’ Simmonds to find out what makes the team tick, what they thought of this seasons racing, their results, and more importantly, what the plans are for total domination next season.

As you would expect, Jon was all too happy to give me a frank and open review of his and the DXB Racing Teams achievements, bearing in mind that he did end up not only class1 champion in the UAETCC series but also the overall champion.

Just for the record, Jon gave me a brief but informative history lesson on his short but successful climb to the top step of the championship ladder. It follows that he started racing here in Dubai in 2007 in a VW Golf GTi in the MSW (Motorsport Wheels) colours. Later this made way for his first UAE touring car entry, this time in a Renault Clio RS, also in the MSW colours. The same car would be entered into the TOYO 24 hour Dubai race in 2008.

In 2008 he decided that he would form DXB Racing. This was after bringing over a certain, Julian Griffin, who would later become a very strong contender in the GT series and, the affable Joe Lewis, both of whom Jon had worked and raced with in the UK for many years. This was at a time when the local touring car series and the racing in general were starting to gather momentum here in the UAE. Jon’s initial thought was that to avoid any conflict of business interest for MSW, DXB Racing would be the new front for the racing concern, carrying out the preparation work on the cars.

From there on in, Jon was totally focussed on his early strategy. Namely to build his business, MSW, into a successful supplier of specialist motorsport components and set up several exclusive regional distribution agreements with world renowned component companies such as, AP Racing, OZ Racing, BBS Racing, Quaife, Lifeline, Race Technology to name but a few; and secondly, to build a professional racing team capable of building & ‘running’ touring and GT class cars over a 2 to 5 year time-frame.

Jon proudly explains, “DXB Racing has more experience and the best technical competence of any other team in the UAE, period. Julian has a wealth of international experience from Clio Cup, Formula Renault, BTCC and Le Mans. All of our crew are highly trained, focused and consummate professionals and Julian’s network of specialists that we can draft in from the UK for endurance races or development, such as Richard Townsend & Ben Coles, is vast. Not only can our people ‘run’ a great car but we have the technical competence to build one from scratch – who else can say as much?”

When I questioned Jon about the highs & lows of the last season, he had this to say;

“The race I least enjoyed was NRD1 where my car was plainly off the pace of the TAM car – this was promptly resolved in time for NRD2. Tangling with a door-closing back-marker during NRD3 where I sustained significant and costly damage to my car and became the recipient of some atrocious and ill conceived comments from the other driver, this was a low point but my performances on track put that to bed I think”. “Both of my season’s high points took place in Abu Dhabi. Winning the 2nd race of NRD7 at Yas Marina Circuit was an amazing experience as not only did I get to stand on the top step of the podium with the Union Jack raised behind me but I also autographed the official winners register in the podium room. My signature is now alongside those of F1 and Aussie Supercar Gods – how cool is that”.

When quizzed about the racing standards here in Dubai Jon was once again frank in his answers;

“The ability level of drivers is mixed but I think that the overall standard of driving has improved considerably over the past season. The racing lines and consistency of the drivers is much improved and there are less silly incidents. In terms of all-out race driver ability I think the front runners in both Touring Car categories (Umair Kahn, Omran Al Owais, Khalid Bin Hader, Khalid Al Mutawaa, Nadir Zuhour and of course myself) is quite high and quite even but we need to be honest and recognise that we are not the best by a long shot. The top drivers in the BTCC would show us the way I am sure and we need to find some real superstars in the region”. John 'LIVE' on the screens at YAS Marina Circuit

“Similarly, in the GT’s I would describe the standard of some of the drivers as very good (but not excellent) and there are some weak drivers in very good cars circulating who should improve a lot in the coming seasons. I am of course biased but currently I think Julian is the best driver in the UAE but even he would concede that the likes of Robert Barff and Rene Rast are in another league. Both of these guys proved this: Rob in the DXB Aston during the final stint of the 2010 Dubai 24hours and Rene in the Porsche at Yas Marina”

“What were the main reasons for you taking the UAETCC Class 1 and overall championship titles this year Jon” I asked and, without faltering, the response was as instant as his foot on the throttle when the lights turn green;

“The team won both the Class 1 and overall UAE TCC this season for 3 reasons:

a.) the car was fastidiously maintained and suffered just one mechanical problem which was caused by a faulty part.

b.) the suspension set-up on the car was perfect (although we provided the same to all of our competitors who brought their cars to NFS for pre-race preparation)

c.) I was totally focussed and prepared myself mentally and physically to drive the car to the best of my ability”

Jon is obviously keen to leverage the team’s strong performance this year and is currently courting sponsors in order to finance next season’s racing campaign, which will include the UAE National GT and Touring Car Championship series as well as overseas endurance events. His sponsorship pitch uniquely includes the added incentive of global TV coverage, something his sponsors will achieve as he is currently filming a 10-part TV documentary based around the MSW, DXB Racing and NFS operations. This will be mixed with a cocktail of all things Dubai and will offer a unique inside view of the on-track exploits of the teams with a touch of the glam and celebrity lifestyle Dubai has to offer.

I would like to add that for me as a photographer, I have been around the pit area when things have not gone well & when things have gone great. Sometimes we don’t always have the red carpet laid out for us, these people are highly strung in the heat of competition (I know, I have been there too) but, I can honestly say, I have never felt that I wasn’t welcome in their garage, no matter what. Even with the heartbreak of losing the Dunlop 24hr race to a drive shaft failure after dominating the race for so long, I wasn’t shown the exit door to the pit…”That’s racing” Jon acknowledges…

Consummate professionals, yeah, I would tend to agree with that statement…

Jon can be contacted directly at  jon@msw-me.com