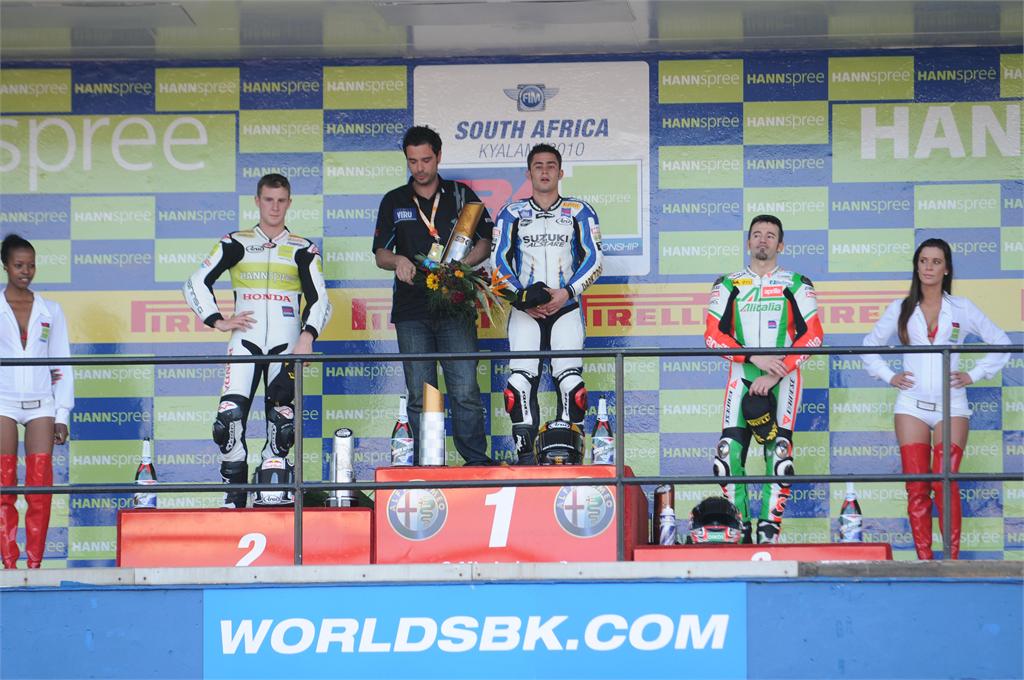 Ducati Xerox rider Michel Fabrizio was celebrating with his squad this afternoon after dominating a spectacular Race 1 to take his first victory of the 2010 season, at the South African track of Kyalami. Michel Fabrizio made a perfect start to Race 1, moving straight into the lead by getting past Crutchlow, Toseland and Checa right off the line.

The Italian rider quickly extended his lead over Checa (on Althea Racing’s 1198) and maintained a constant one second advantage for the entire duration of the race. Lap times inevitably began to increase during the final stages of the 24-lap race but nonetheless Michel carefully managed his advantage and crossed the line first, to take his first race win of the 2010 season, just over a second ahead of the Spaniard. “I’m really happy with the win in the first race, happy for Ducati of course but above all happy for myself. I really needed a result like this after several difficult race. It wasn’t easy however, I had to make an intelligent race, doing all I could to maintain the second of advantage that I had over Carlos. It was a great race but also a very tiring one! Race 2 went very differently; the level of grip immediately began to drop after only three or four laps and it became impossible to catch the leading group that continued to gain on me. Anyway with the points taken in race 1 today I’ve gained a position in the overall standings and now I’ll turn my attention to the next event at Salt Lake, a track I really like.” After racing to third place in the opening race, in front of 54,000 spectators, race two was particularly dramatic and action-packed; and one of the best battles of the season so far: Throughout the race the Briton fought tooth and nail with fellow countryman Jonathan Rea (Honda), with Haslam taking the lead several times only to get overtaken again. The battle went right down tothe wire; Haslam making an audacious passing move one lap from the end. This time he made it stick and went on to take the chequered flag by half a second put Suzuki back at the top of the Manufacturer Standings. It was his third win and ninth podium of the season and one of hardest victories of his career. “What an amazing day! The second race was one of the best races I’ve ever been involved in and definitely one of the hardest. Jonny and I had a real ding-dong and it was bar-to-bar stuff for almost the whole race. I passed him a few times, but he always got me back and the longer the race went on I could feel him working out where I’d pass and how he’d stop me. In the end, I had to pass at a different place and this time I made it stick and held on to the flag. To win a race like that is quite an emotional thing and I have to give a big thank you to the whole team for all their work this weekend.

“The bike in the second race was an improvement over race one. We had a few issues in race one, so changed the balance by making a bit lower in the front and higher in the rear. I still had some issues with it, but it was better and allowed me to fight for the win. After the drama of race two, it’s hard to remember what happened in race one. I didn’t get a good start and had to make up a lot of ground as best I could. I wasn’t completely confident in the front end, so could not push hard enough to catch Michel Fabrizio and Carlos Checa, but I was happy to get on the podium. Today was a tough day, but I’m very happy to have extended my Championship lead and I’m looking forward to the next round in America.”