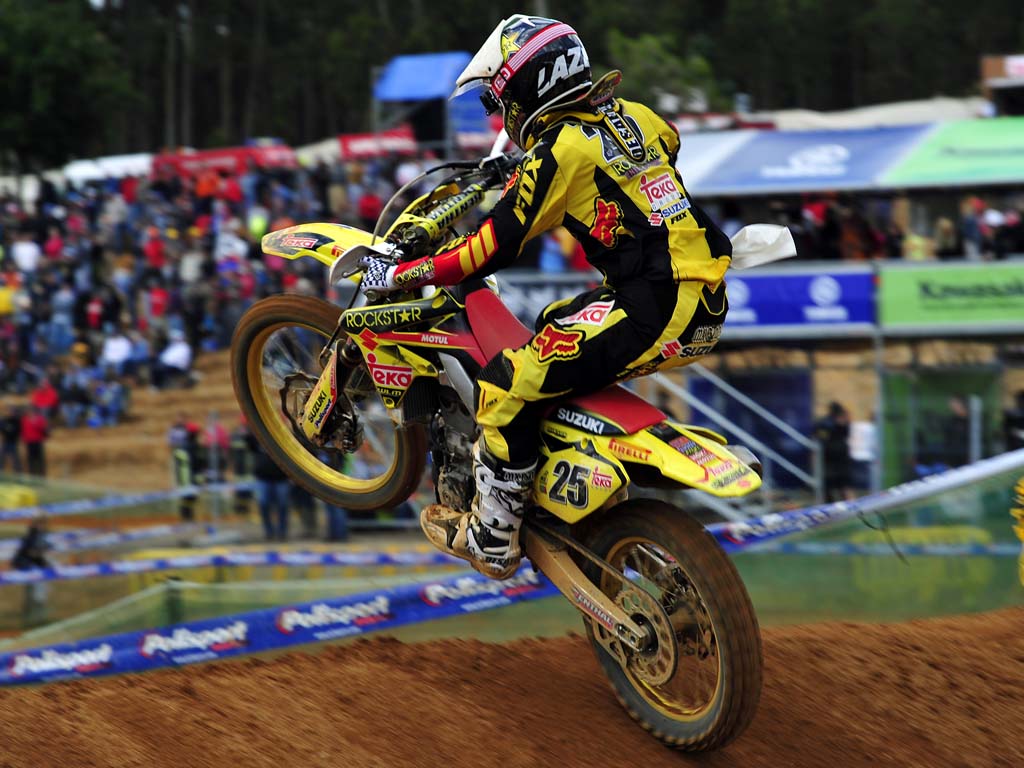 9 May 2009, Agueda (Portugal) – At the fourth round of the FIM Motocross World Championship Pirelli Scorpion MX ruled all classes and won all six motos disputed in Portugal. MX1 belonged to Belgian Clement Desalle, MX2 was owned by Frenchman Marvin Musquin, who also returned to the top of the championship standings, while the Women’s World Championship event, the second of seven this season, was won by German Stephanie Laier who continues to front the series. The premier class was monopolised by Pirelli riders, steering their factory machines using Scorpion MidSoft 32 front and rear, as all three podium positions were captured. The overall win went surprisingly to Clement Desalle, who only made a late decision to race in Portugal after suffering a dislocated shoulder in Holland two weeks ago but was victorious thanks to a brace of second positions. The works Suzuki rider was able to defeat world championship leader Antonio Cairoli, who was fifth in the first moto after a bad start but retaliated to win the second race. The rostrum was completed by the Sicilian’s team-mate Max Nagl. The German raced away with the first outing but was slow to build his rhythm in the second sprint and could only finish fifth. Yamaha Monster Energy rider David Philippaerts was fifth overall and suffered a fall in the first moto, after which he took third but suffered an injury to his left hand and was not in the same shape during the second race, registering eighth by the flag. The day was not a complete disaster for the Italian as he was able to rise to third in the championship thanks to his points haul, behind Nagl and Cairoli. The heavy fall at the Dutch GP suffered by defending champion Marvin Musquin did not leave many ill-effects as the Frenchman took his third win in four rounds. The works KTM rider, with the Scorpion MidSoft 32 front and rear, was unbeatable in both motos and has once again risen to the top of the standings. The 2009 number one battled and defeated team-mate Jeffrey Herlings, second overall with the Scorpion MidSoft 32 front and ahead of Suzuki’s Ken Roczen, who he trails in the championship by just three points. A crash in the second race ruined the overall result of third Red Bull KTM rider Shaun Simpson who had taken fourth place in the opening moto.