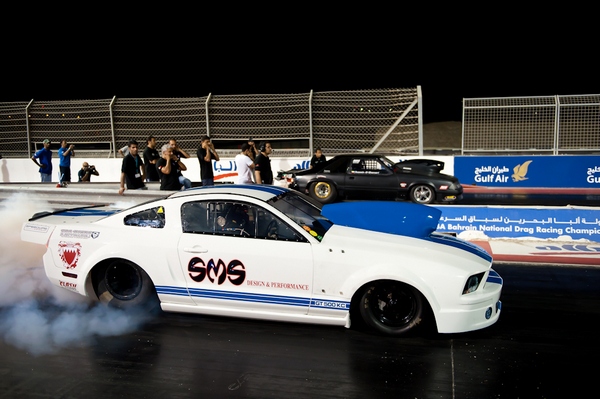 BIC-May 9th, The sixth and final round of the 2009/2010 Bahrain National Drag Racing Championship set the Bahrain International Circuit strip alight this past weekend, with more than 110 cars and motorbikes from Bahrain and across the GCC battling it out for pride and glory.

The event was organized by the Bahrain Drag Racing Club (BDRC), in cooperation with the Bahrain Motor Federation (BMF) and ‘The Home of Motorsport in the Middle East’.

SMS Racing’s Bahraini racer Salah Salahuddin was the star of the evening, setting a new world record in the Street V8 category with a drive of 8.45secs down the quarter-mile drag racing track.

Salahuddin broke the previous record of 8.53secs, and with the new mark, claimed an impressive victory. Kuwaiti Mohammed Suleiman was second in 8.908secs, while Bahraini Khalid Saif finished third.

“Breaking the record is a great thing, but it was something very difficult to do,” Salahuddin commented.

“I knew that the car was fully equipped to run its best possible time, and I thank my team at SMS Racing and all its members: Majed Abdullah, Ahmad Alsiddi, Ahmed Darwish, Jaafar, Mohammed Sharif, Ibrahim Al Ansari, and Hassan. I also want to give special thanks to Joe Lepo, the BDRC and all those involved in the championship.”

In other categories, excitement reached its peak amongst the Pro Mods, especially in light of the tough competition between the remaining title contenders.

Bahraini Saad Al Murran won first place with a drive of 4.320secs, as he beat Rashid bin Tamim of the UAE in the final race. Bin Tamim had a time of 4.809secs. Bahrain’s Tariq Al Hadi came third.

In the Outlaw 10.5 category, Kuwaiti Turki Al Hammadi claimed the victory ahead of Salahuddin. Al Hammadi had a time of 7.230secs in the final, while Salahuddin had a mark of 7.384secs. Kuwait’s Abdulla Shatti was third.

Mohammed Saleh was the hero of the Street FWD. He took first place in 10.829secs, while Adel Hassan was second in 11.229secs. Abbas Saleh was third in the category.

Jamal Ibrahim snatched the victory in the Street RWD. He registered a time of 11.496secs in his win, and was followed in second place by Sayed Ahmed Alawi who recorded a mark of 11.576secs. Salman Mohammed was third.

Mohammed Chakib won the Super Street RWD. He registered a time of 8.974secs in the final showdown, which he won against Yousuf Zayani who had a 14.491secs finishing mark. Salman Taqi came third.

Adel Salem managed to claim the victory in the Outlaw FWD with a time of 9.562secs. Bahraini Abdul Rahman bin Hasher was second, while Yousuf Zayani came third.

Zayani then came first in the Outlaw RWD. He had a mark of 8.325secs in the final, beating Bahraini Mohammed Hajji. In third was Ibrahim Kanoo.

There was also plenty of high octane action in the three motorbikes categories of the round.

In the Super Street Bike, Saudi Arabia’s Hattan Abadi was the winner in 8.082secs, while countryman Mishari Turki was second in 8.911secs. Another Saudi, Mazen Mindura, came third.

The winners of each race were presented their trophies by officials from the circuit, BDRC and BMF.