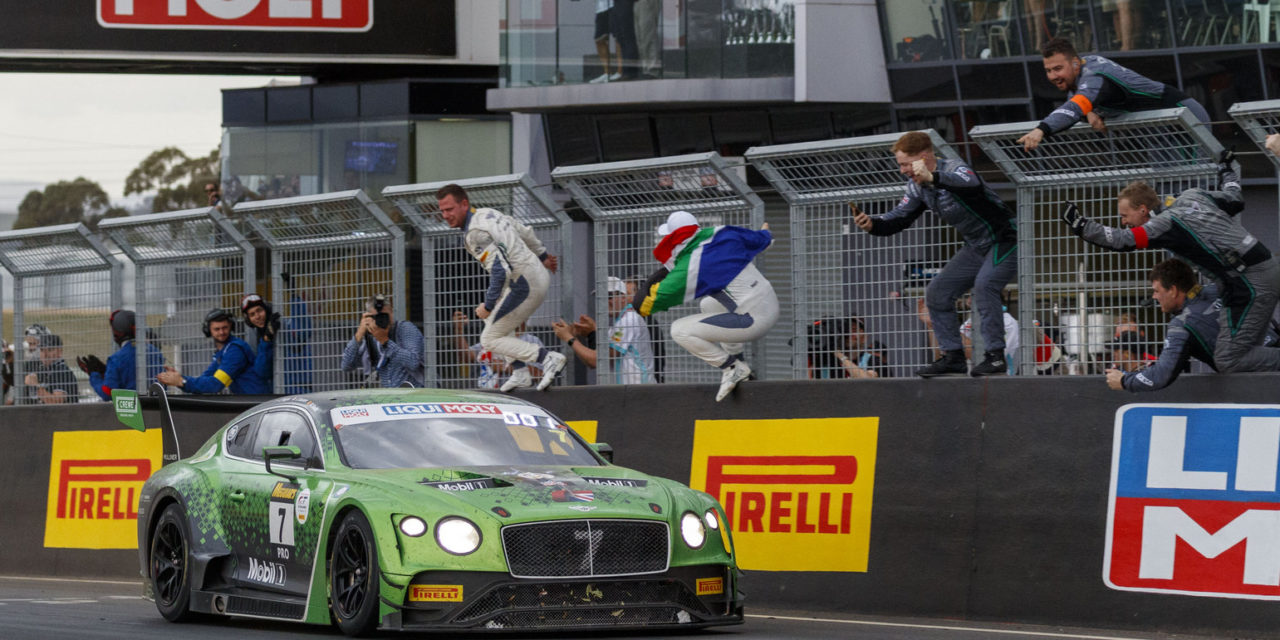 Feb 2nd 2020 – After five years of trying, close-calls and heartbreak, Bentley has finally won at Bathurst.

The storied British brand triumphed in another dramatic, record-breaking Liqui-Moly Bathurst 12 Hour at Mount Panorama; breaking not only their own Mount Panorama drought but quite literally bringing the rain down as well.

Driven by French drivers Jules Gounon, Maxime Soulet and South African Jordan Pepper, the No 7 Bentley Team M Sport entry started eleventh but headed a majority of the race – only to get to the final hour in front as a major storm front passed through the Bathurst region.

The rain threatened for hours and finally poured down at the exact moment the Green Bentley crossed the line to win the race; a perfect scenario for a drought-breaking performance.

Bentley become the sixth different winner from the last six years on the Mountain; the second consecutive brand to win the 12-Hour for the first time and also become part of Mount Panorama history on a record-setting day.

At 314 laps, the race was the longest 12-Hour on record and included the longest period of racing (4 hours, 10 minutes) without a Safety Car in event history.

It’s also the lowest starting position – 11th – for a race winning car in 18 editions of the Bathurst 12 Hour.

Both cars were elevated up one position from their original finishing position following the checkered flag after the Gruppe M Mercedes – that had crossed the line in second – was penalised for a pit stop infringement following the conclusion of the race.

Bentley’s remarkable win came despite a near-miss close to the finish when the car suffered a puncture moments before pitting for its final stop of the race.

“It was an amazing race,” Gounon said.

“It was really, really tense at the end because I had a puncture before the last stint so the team was really scared after the puncture of (Raffaele) Marciello.

“It was a matter of trying to keep the car away from the kerbs, the debris, so it was tense still; not flat out but trying to manage the problem. It’s amazing for us, amazing for M-Sport, I think the new car showed potential last year and we’ve never had a big win except Paul Ricard, so it’s a big one for us.

“You have those days where everything comes together for you; you see the rain dropping after I passed the line. Thanks to the racing gods I can say it was a good one. When you get a puncture while leading in the last hour at Bathurst, it’s not a nice moment but we’re standing here now.”

McLaren scored their second podium finish on the Mountain thanks to the efforts of 59Racing, the 720S GT3 starring on its Bathurst debut.

Having started on the front row, the car in the hands of Ben Barnicoat was an early leader and topped the charts several times throughout the day.

“Immediately I could feel the car was quick – I was able to get past Patrick Pilet, caught Maxi (Buhk), I saw my chance, took it and it came close but I got it right,” Barnicoat said.

“That’s what we get paid for… not when you get it wrong! The pace was very good, we mixed up the strategy a bit compared to what we were thinking but in the end it all worked out.”

Triple Eight backed up fourth in the 2019 12-Hour and second in the Supercheap Auto Bathurst 1000 last October with third in the 2020 12-Hour, with their Mercedes AMG GT3 a contender all day. 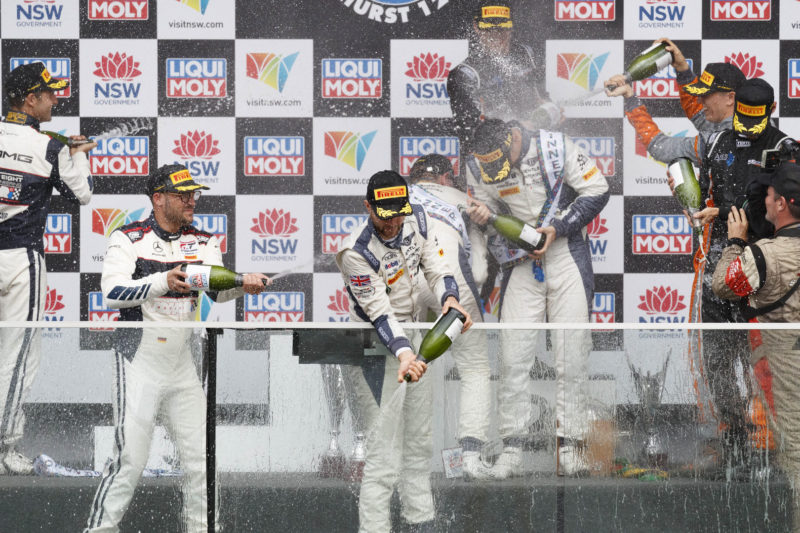 Bentley’s remarkable win came despite a near-miss close to the finish when the car suffered a puncture moments before pitting for its final stop of the race.

“I think it’s stepped up our team and we’re still learning about this car and GT racing.  Jamie and myself are still learning the car, especially at this track where we’re used to the V8,” van Gisbergen said

“It was a cool finish, having a race with Matty (Campbell). He was trying to put me off, flashing the lights so I put my hazards on to put him off, got him back a bit. It’s a nice surprise to get a podium out of it.”

59 Racing backed up their outright podium with a class victory in the Silver category after a storming drive by Dominic Storey, Martin Kodricand Fraser Ross – the combination finishing eighth overall.

23 of the 34 starters finished the race while seven cars finished on the lead lap, equal to the existing record.

A record three-day attendance of 43,111 attended the 2020 event; an increase of nearly 2,000 people on the previous record despite record-breaking temperatures in the high 30s for a majority of the weekend.