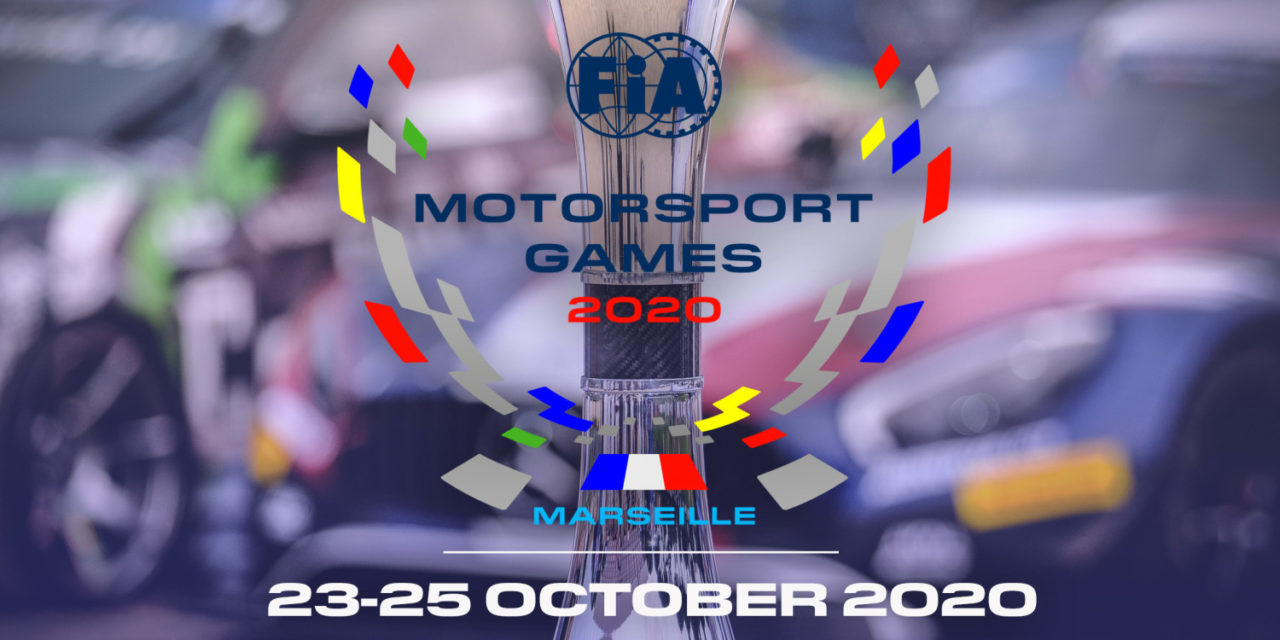 Official confirmation of the multi-disciplinary event’s 2020 location follows a successful inaugural contest, which was hosted by Rome and staged at the nearby Vallelunga Circuit on 1-3 November 2019.

The torch has now been passed to France, with the bustling port city of Marseille and the FIA Grade 1 Circuit Paul Ricard hosting this year’s action. Following a successful collaboration for the inaugural event, the 2020 edition will again be organised by the FIA in conjunction with SRO Motorsports Group.

In a global first, the 2019 FIA Motorsport Games saw competitors in six racing disciplines travel to Rome to compete for gold in the colours of their national flag. A wealth of on-track action was preceded by a spectacular opening ceremony in the Italian capital, in which cars paraded by the Colosseum before all 192 drivers representing 49 countries and territories were presented to the world at the historic Circo Massimo.

Over the following three days participants tackled the GT Cup, Touring Car Cup, F4 Cup, Drifting Cup, Karting Slalom Cup and Digital Cup, ensuring a highly competitive atmosphere at Vallelunga. Team Russia topped the medal table, earning one gold and two bronze medals to be crowned 2019 FIA Motorsport Games champions. The second edition promises to attract an even greater number of competitors, with all six disciplines returning in 2020 and further categories set to be added ahead of this year’s contest at Circuit Paul Ricard.

The French venue offers an ideal location at which to stage such a globally significant event. The track was created in 1970 and has welcomed a vast array of prestigious international categories including the FIA Formula 1 French Grand Prix, which returned to the circuit in 2018 following a 28-year absence. Multiple track configurations are possible, while considerable investment has been made to ensure the very highest standards in safety. Celebrating its 50th birthday this year, Circuit Paul Ricard demonstrated its future-forward approach by becoming the very first French motor racing venue and second F1 track to achieve the FIA 3-star environmental accreditation.

Circuit Paul Ricard is situated within easy reach of Marseille by road. The French city is much admired for its setting on the scenic Mediterranean coast, with its thriving Old Port district and the Basilica Notre-Dame de la Garde among the area’s most famous landmarks. Marseille Provence Airport provides a global transport hub, while the Le Castellet International Airport located near to Circuit Paul Ricard ensures that the event, its competitors and spectators are well-served.

Further news regarding the 2020 FIA Motorsport Games, including the new categories that will join the programme this year, will be officially confirmed over the coming months.

Jean Todt, FIA President: “I’m delighted that following the success of the inaugural edition, the concept of the FIA Motorsport Game continues to grow as the event moves to the prestigious Circuit Paul Ricard. This is a clear indication that this unique approach to motor racing proved to be the right one and that the future is bright for the FIA Motorsport Games. I feel confident that the 2020 edition will continue to bring together both fans of motor sport as well as people with general appreciation of international sport. At the same time, I’m eager to see even more national federations capturing the patriotic spirit of the event and getting involved. By including grassroots level disciplines, they offer an accessible platform for future generations of competitors, something that is very important for us at the FIA. I am very much looking forward to the FIA Motorsport Games taking place in France.”

Nicolas Deschaux, French Federation of Automobile Sport President: “In 2020, France is proud to welcome the second running of the FIA Motorsport Games in Marseille, which will host the event in tandem with Circuit Paul Ricard, the current home of the French Formula 1 Grand Prix. Here in our country this unique and innovative concept will again highlight the diversity of motor sport with a wealth of disciplines featured, from Circuit Racing through Karting and Drifting to Digital Motor Sport. Under the auspices of the SRO Motorsport Group’s recognised know-how, the FIA Motorsport Games will bring together drivers and teams under the colours of their national flags. Certainly, the world of motor sport will rock to the rhythm of the French Riviera during the weekend!”

Stephane Ratel, SRO Motorsports Group Founder & CEO: “The inaugural FIA Motorsport Games surpassed all expectations so I am delighted that we can now confirm the location and dates for this year’s edition. Marseille is a glorious city in a spectacular region of France, and I know that it will provide an ideal stage for the second event. The same can be said of Circuit Paul Ricard, which is a truly world-class racing venue with superb facilities. Our focus now is on making the 2020 FIA Motorsport Games an even greater success than the inaugural edition. With our location set and new disciplines to be announced, I believe we are on course to achieve this.”

Stéphane Clair, Circuit Paul Ricard CEO: “We are extremely proud to host the next edition of the FIA Motorsport Games. This outstanding event definitely matches our strategy and our will to look towards the future on the eve of the track’s 50th birthday. I am confident that we will supply a convenient venue for the various disciplines and that all the invited nations will find a suitable environment to shine for their own country. We have already started working to give our very best for October.”

Further news regarding the 2020 FIA Motorsport Games, including the new categories that will join the programme this year, will be officially confirmed over the coming months. For more information visit fiamotorsportgames.com/

Be back for opening race then

How long is it gonna take Lawrence to realize if he wants his team to be that successful, he needs a better driver than his son?

I'd love to see lance win a title and prove that if you are just competent.. All you need is a good car in f1. Which will be a catalyst to bring the field together

Not a fan of Stroll but hopefully Perez gets the chance to mix it up at the front and prove all the midfield podiums over the years weren’t flukes.

Whatever its name, i still would call it Force India , that name seems stick in my head 🤣

I must admit that I have never really taken to the name "Racing Point". To me, it sounds like the name of a team who appear in those fantasy motor racing championships created by people who use motor racing simulators on the PC such as Grand Prix 3 or 4 (and I have seen a fair share of those on YouTube these last few years)

Aston Martin!! My favorite brand... I hope they get to manufacture their own engine and chassis.. I may just betray Merc..

Forget about Lance. Lawrence helped Williams for a year. "Saved" force India and now wants a team for himself (so to speak) and wants to "help save" Aston Martin in the process.. Dude. Can you be my father haha

I don't know why but I cannot bare that bloke 😂😂😂😂

Great to read the Aston Martin name will be seen in F1.

Can't wait for a Green car on the Grid!

This is great news ! And needed

This is great. Name change was way overdue.

In that case, don't waste one of the seats on Lance.

I'm sure the Red Bull team are happy at losing a Sponsor!!!

Who will be providing the engines

It’s nice to see this happening

Is this real or just another April 1st joke???

Is this April Fools?

The only way that lance can have a seat ahahah

I can see a father son relationship getting strained

Challenge #3 of the 2020 MotoGP eSport World Championship is almost here! 🤩

The new 24H DUBAI 2020 merchandise is now online in our shop!

Check out our shop now, and get yourself a limited edition 24H DUBAI polo, vest or cap😍

What, no umbrellas or wellington boots?!

Karim: "Being able to CRASH a 700kg, 1000 horsepower car only with your hands and your feet is... it's the best thing" - we hear you, Romain Grosjean"

All the expert race car drivers on this post 😂🤣😂🤣 Yeah, Grosjean isn't the best, but he's certainly better than all you facebookers knocking him 😉

The problem is you are not good enough. You crash even under saftycar rules.

Of course I can't drive as well as Grosjean, but I can still differ a good race driver from a bad one.

Ah the hate and cheap jokes on Romain Grosjean. I bet the majority of the haters here can’t even ride a tricycle without going flat on their faces! Get a life, kids.

Not the best driver, but a generally good guy.

Yeah takes a special kind of talent to spin a car in pit lane and end up facing the wrong way.

But he can’t control it lol. Poor romain. Give me the wheel I’ll show you 🙃

Wreck it Roman, coming to a safety barrier near you

Still mastering the art of leaving the pitlane!

To whomsoever it concerns, he has 10 podium finishes to his name!!

Best season for Grosjean. He didn’t crashed in any race so far.

The best driver on the grid that knows how to crash

Even rarer treat when you can't manage it often. 😃

Hes not good at controlling it though, he crashes a lot

Same feeling i get when im drunk out of my mind, and pissing all over the bathroom..

Control is a bit loose, generally it ends up in the wall

Try using them then!

“Being able to control.”

Except he can't control it...even under a safety car.

Yea,but Grosjean doesn't mean himself by "able to control" right?

Sit back and enjoy Casey Stoner's homecoming as World Champion with thrilling battles throughout the field! 🙌

Valentino rossi is the Legend of Moto Gp no one can replace him.

Marc Marquez I want you stay one heart. I love we team. See you....

I have known kawasaki took part in motogp

Bloke was a gun!

Where is Daemon Hill? 😀

Only a few more hours left with his hair 💈💇‍♂️🙂

Lando Norris shaves it off on Thursday after raising thousands for charity 👏 ... See Less

i do this every 4 weeks and nobody applauded

So we know he is not keen to donate any of his money. But he's not even keen to sacrifice all his hair. Hilarious :).

Carlos was right! Baldo is real 😆

Obviously I don't know the kid but man he seems to have his head on straight. Can't help but like him...

its all fun and games until you have to do it every week ! 😀

He obviously assumes we won’t get racing again until Italy. Need that low drag setup am I right?

His hair generating more headlines than some teams 😂

he will look like the james mcavoy version of charles xavier

Brightest thing for f1 in years

What a waist of time

I can't wait to see him bald 😂

Get Sainz to do it.