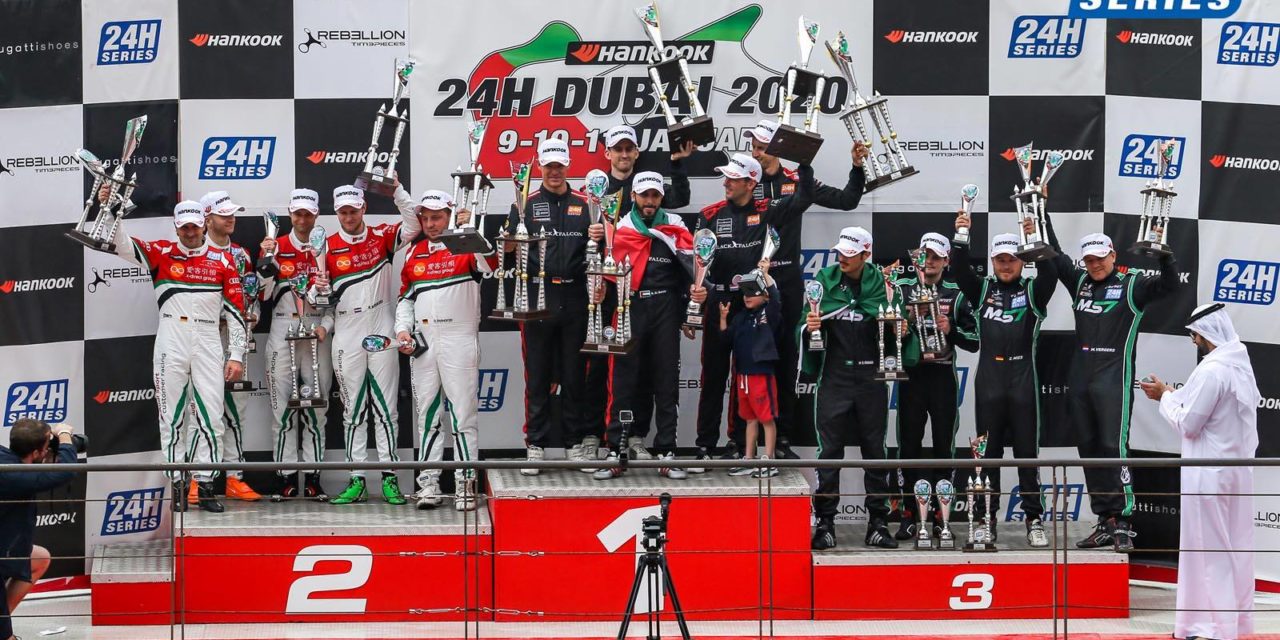 DUBAI (11 January 2020) – The Black Falcon Mercedes-AMG GT3 with starting number 4 and drivers Khaled Al Qubaisi from the UAE, Ben Barker from the UK, Hubert Haupt and Manuel Metzger from Germany and Jeroen Bleekemolen from The Netherlands was confirmed as the winner of the 15th edition of the Hankook 24H DUBAI. For the first time in the event’s history, the full duration couldn’t be completed. Heavy rainfall and standing water prompted race control to red-flag the race after 7h17m. In spite of the best efforts by the staff and officials of Dubai Autodrome, continuing rainfall throughout the night and the morning prevented any further action. It was decided not to continue the race for safety reasons, a decision fully accepted and unanimously applauded by everyone in the paddock and pit lane.

From the moment the first team members and drivers arrived in Dubai, the weather had been the main talking point. Race week started in fine conditions, as usual in the United Arab Emirates, but rain was forecast for Friday and Saturday, the days on which the race was scheduled to take place. And quite a lot of rain, too, causing some worries among the teams from all over the world that had come to participate in the first international endurance race of the new calendar year. Tyre partner Hankook reacted quickly and had an additional supply of rain tyres delivered to Dubai Autodrome to be prepared for any conditions and to meet the increased demand from the participating teams.

The event officially started on Wednesday with a parade of the race cars from Dubai Autodrome to the nearby First Avenue Mall in Dubai’s burgeoning Motor City district with a large crowd in attendance. The traditional Welcome Barbecue was held on the start-and-finish straight of the circuit on Wednesday evening. Conditions were still fine for practice and qualifying on Thursday and after rain during the night also for the pre-race activities and the start of the race on Friday at 15.00 hrs local time.

The first part of the race saw entertaining on-track action, but after five hours, the intensity of the rain increased, leading to more and more water on the track and in the run-off areas. At 22.17 hrs, race control decided to interrupt the race with the red flag and all cars were parked on the main straight. 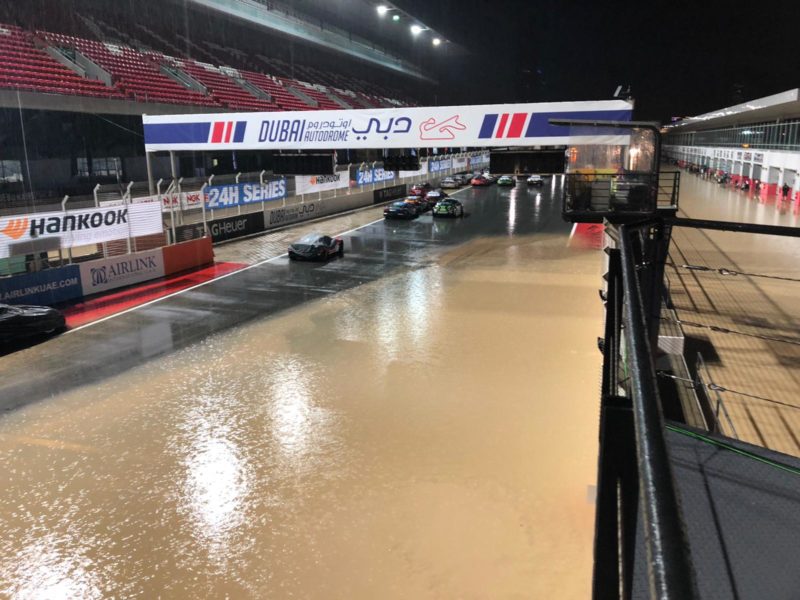 Rain continued throughout the night, affecting not only the infrastructure of Dubai Autodrome, but also the city of Dubai and the rest of the Emirates. At 7.00 hrs, after thorough analyses of the situation, it was decided in mutual consent by race control, Dubai Autodrome and CREVENTIC not to resume the race on grounds of safety.

At the time the red flag came out, the Black Falcon Mercedes-AMG GT3 (#4, Khaled Al Qubaisi / Hubert Haupt / Ben Barker / Manuel Metzger / Jeroen Bleekemolen) was leading the race with 168 laps completed. Therefore, the German team was confirmed as the winner of the race, claiming its record fifth win in history of the Hankook 24H DUBAI after earlier success in 2012, 2013, 2015 and 2018. It was also the fifth Dubai race win for Mercedes-AMG. Khaled Al Qubaisi, Hubert Haupt and Jeroen Bleekemolen now all are three-time winners of the event. Khaled Al Qubaisi, from the UAE, was behind the wheel when the race was stopped. “Conditions were extremely difficult, there were puddles everywhere,” he reported. “It is a pity we can’t continue, but there is no doubt that stopping the race is the right decision. Safety comes first.”

DUBAI (11 January, 2020) – Belgian team AC Motorsport claimed its maiden Hankook 24H DUBAI TCE division win in a race that was shortened to 7h17m due to torrential rain. After the decision not to continue the race for safety reasons, the team’s Audi RS 3 LMS (#188, Stéphane Perrin / Vincent Radermecker / Tom Boonen / Gilles Magnus / Matthew Taskinen) was classified as the winner. Having been on TCE pole already twice in Dubai, the team finally celebrates its maiden division win in the Hankook 24H DUBAI. For Audi, it was the second touring car success in Dubai after the brand’s maiden TCR win in 2017. The result also means the first major international motor racing success for Tom Boonen, a multiple cycling champion.

“Conditions out there were simply unbelievable. I was driving really slowly, but there was even aquaplaning on the straights,” Canadian Matthew Taskinen, who was behind the wheel of the class-winning Audi when the red flag came out, commented. Next to the win in the TCE division, the AC Motorsport team also came out on top in the TCR class, followed by two Volkswagen Golf GTI TCRs, the Lestrup Racing Team car (#111, Hannes Morin / Martin Öhlin / OIiver Söderström / Marcus Fluch) and the Autorama Motorsport by Wolf-Power Racing entry (#112, Alberto Vescovi / Roberto Ferri / Miklas Born / Constantin Kletzer / Yannick Mettler), both two laps behind.