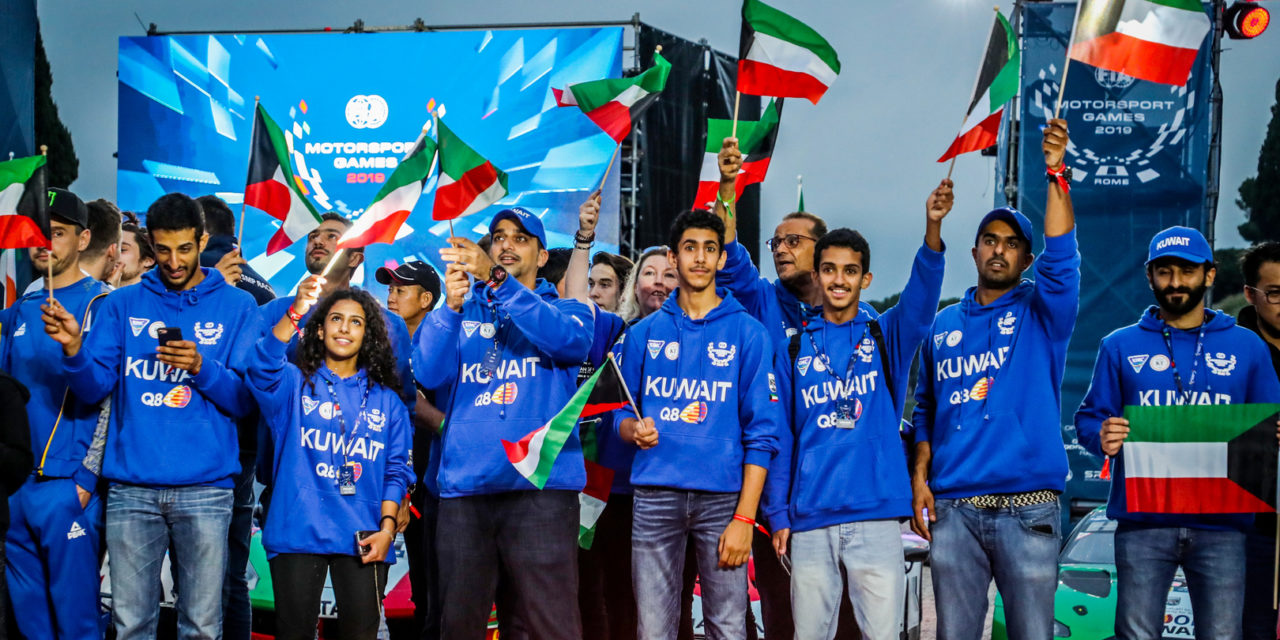 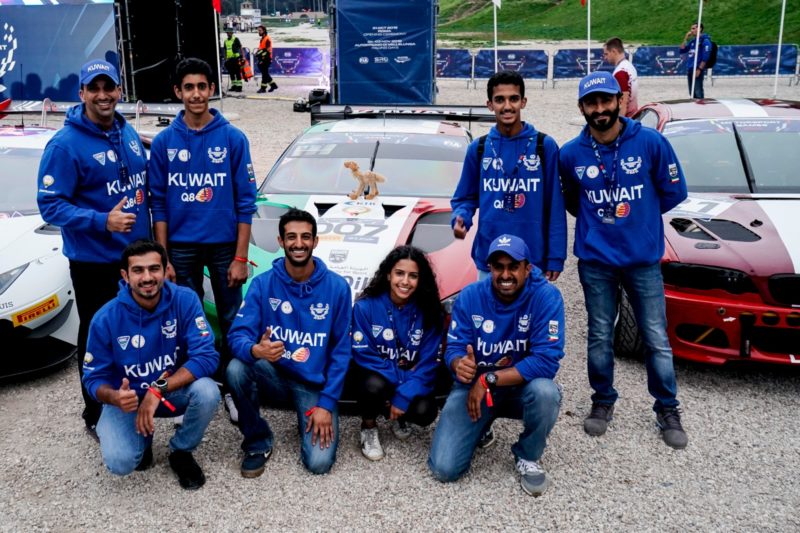 Team Kuwait drivers with the Kuwait 007 numbered Aston Martin GT3, complete with the toy Camel as team mascot at the Circus Maximus

The inaugural nation v’s nation event, organised by the FIA in conjunction with SRO Motorsports Group, commenced against a glittering backdrop at the opening ceremony location at Circus Maximus, an ancient chariot racing venue where the cars arrived after an exciting parade through the streets of Rome.

The courtyard was filled with selected cars proudly on display, including the mighty Kuwait 007 numbered Aston Martin GT3, draped in the national flag, complete with the toy Camel as team mascot. 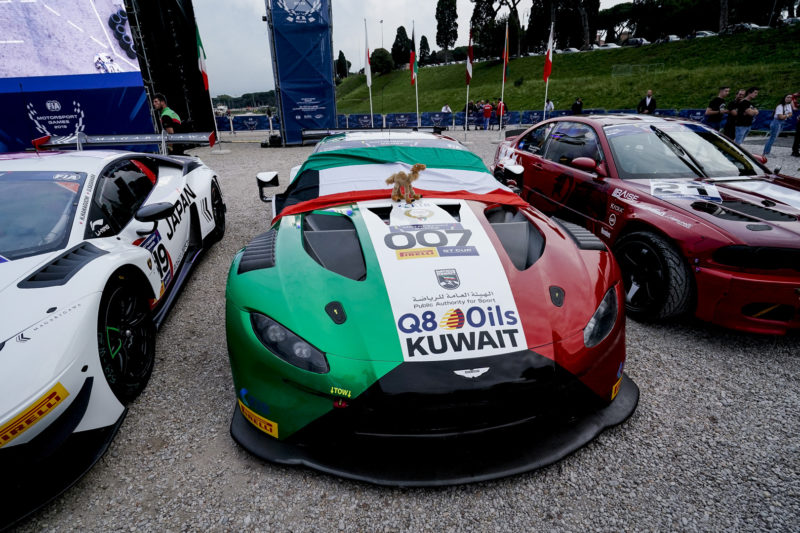 A total of 192 drivers representing 49 National Sporting Authorities (ASN) were in attendance at Circus Maximus. Led by their team captains, the competitors then entered the arena in the colors of their national flags and assembled on-stage. 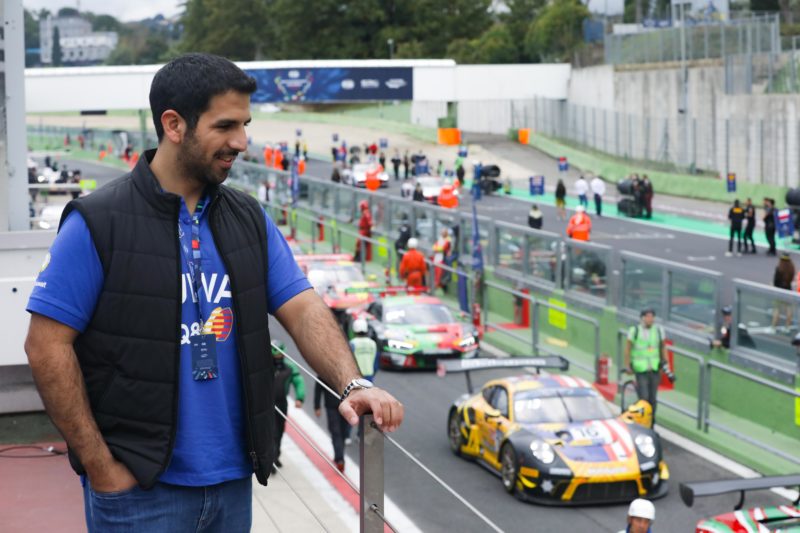 HE Sheikh Fahad Nasser Sabah Ahmad Al Sabah, President of the Kuwait Olympic Committee (KOC) who visited the teams during the weekend

The Kuwait team were honored by the attendance of VIP’s and dignitaries including HE Sheikh Fahad Nasser Sabah Ahmad Al Sabah, President of the Kuwait Olympic Committee (KOC) and Dr Saqer Al-Mulla, Deputy Director of Public Authority of Sports (PAS) alongside Mr. Emad Jawad Bukhamseen, Chairman of the Kuwait International Automobile Club (KIAC) and Mr. Issa Hamza, President & CEO of the Kuwait International Automobile Club and the Ambassador of Kuwait in Italy, HE Sheikh Azzam Al Sabah. 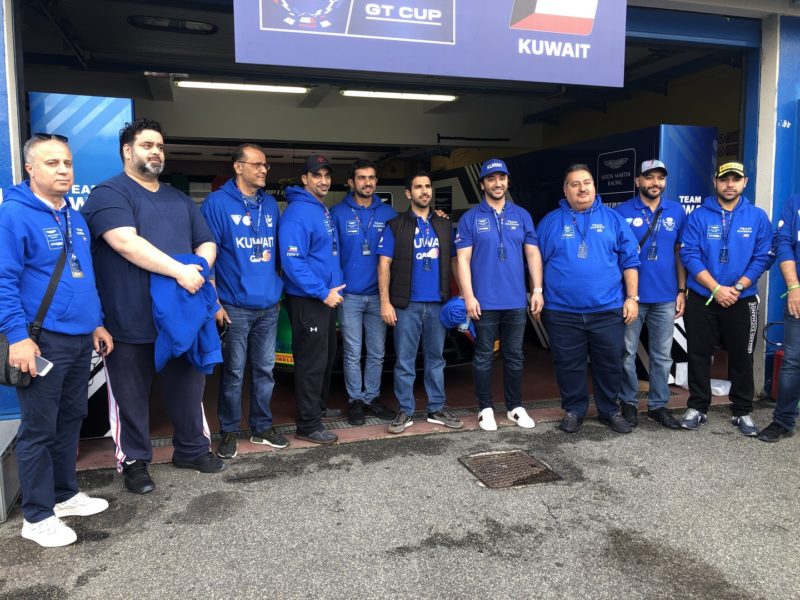 Kuwait was the only Arab country to enter the competition and is one of only two country’s alongside Russia fielding a full delegation of drivers, representing all six racing disciplines.

Each category was awarded gold, silver and bronze medals to its top three finishers, all of which contributed to an overall ‘medal table’ to determine the winning nation at the end of the event.

The GT Cup team raced the #007 numbered Aston Martin Vantage GT3 run by Optimum Motorsport, alongside 21 other nations in the GT Cup.

Khaled and Zaid had never tested the Aston Martin car before, and it was a tall task, as with the other competitors in team Kuwait, to jump in any car and be immediately competitive, especially in such treacherous rain conditions. 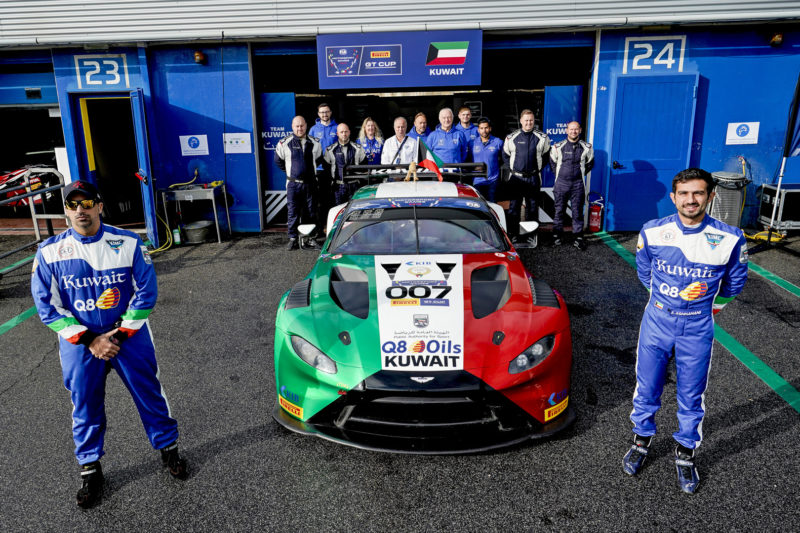 Drama unfolded In the opening lap of race 1, as the Kuwait car was hit by team Belgium (Machaels), knocking the Aston off course at high speed and into the barriers at turn 4, the car fortunately would be repaired overnight by the Optimum Motorsport crew ready for race 2 on Sunday morning. Team Belgium, post-race was handed a 30second penalty for hitting the Kuwait car.

Zaid, fresh from the Blancpain GT Series Endurance Cup this year started the GTCup main feature race on Sunday afternoon, in changing weather conditions all teams took a gamble on either slicks or wets, the team opted for wets while observing the black clouds above, bringing in a thunderstorm. After completing the two sighting laps on wets Zaid pitted immediately for slicks, feeling that there was enough grip. Finding himself at the back of the field he set about reeling in the leading cars setting fastest lap after lap, till he climbed to 5th overall and secured the team the ‘Pirelli Speed Hero Award’ for the fastest lap of the race.

Just as the pit window opened for the driver changeover, the rain started to fall heavily and Zaid struggled with grip. Khaled was next to jump in the car and the team naturally opted for wet tyres, almost immediately the safety car was deployed due to spinning cars landing in the gravel, and with poor visibility all the drivers struggled. After a few laps of green flag running, a second safety car was deployed. The team managed to hold an admirable 14th place overall, at the chequered flag.

Khaled Al Mudhaf, Kuwait Team Captain, – “We certainly had our work cut out for us in all categories, coming from a hot desert country I don’t think we have ever seen so much rain while racing. Sure the competition was going to be tough for all of us as we never had any prior testing in these cars so I’m super proud of all our drivers, we raised the Kuwait flag high and showed the world our talent. We are honored to have so much support from our visiting VIP’s and dignitaries who have personally come to show support, next year we hope for better results and we will keep pushing”.

Zaid Askanani – “I think it’s a great event, It’s different from what we usually do. On the circuits, we act more as a driver or team and not for one’s country so I think it’s a good idea to only bring nations like the Olympics or other sports. It is also good to have other categories together like drift, F4, TCR, etc and to involve the younger generation”.

The Touring Car Cup was represented by one of the region’s most successful regional Radical drivers, Salem Al Nusif, who contested in the Comtoyou Racing team Audi RS3 LMS SEQ. The Touring Car Cup, is reserved for TCR machines, and proved one of the most spectacular categories in the new multidisciplinary event, with twenty drivers at the wheel of cars of eight different brands. 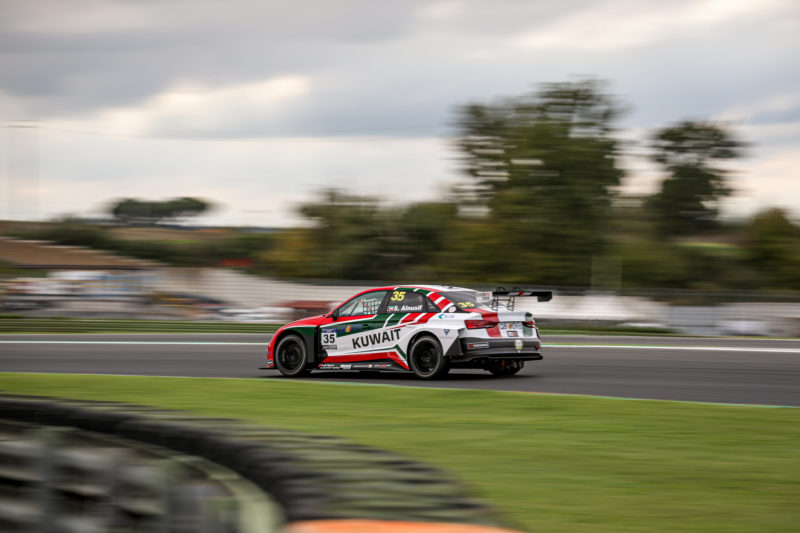 Salem Al Nusif – “These TCR cars are amazing to drive, and It was a difficult weekend with mixed conditions. Running slick tires on a damp track didn’t give me confidence in a car I drove for the first time. But by the middle of the race I got the confidence back and lapped at the pace of the front runners. Qualifying went better in the dry conditions and I managed P12 against seasoned champions in TCR. It was positive overall, I kept the car on track, and learned an awful lot. The ‘comtoyouracing team must be the best team I ran with, very professional and friendly. I think everyone did a great job organizing with everyone involved. I look forward to more racing soon, and I thank everyone with us this week, they were all amazing”. 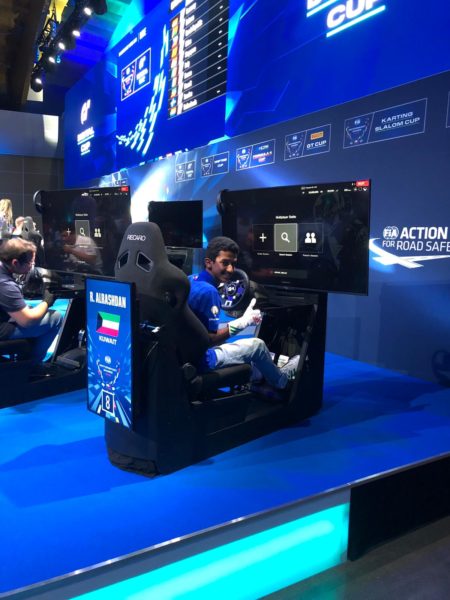 In the Digital Cup, 19-year-old Rashed Alrashdan represented Kuwait. He has never participated in any official digital motor sport championship, and was very excited about his first trip abroad, such an amazing event to experience, luckily he enjoyed racing under cover, in the dry but was knocked out during the qualifiers and gave his best effort, even supporting the other teams in his spare hours of rest. 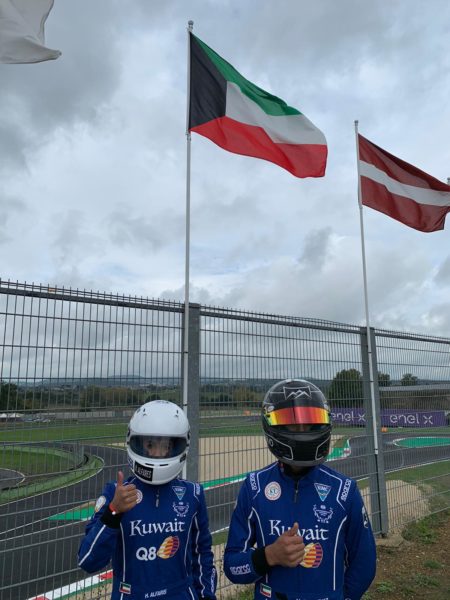 16yrs olds Hessa Alfares and Marshad Almarshad did an admirable job competing in the Karting Slalom Cup. All the karting contenders tackled the slalom course with identical electric-powered karts. Each nation was represented by mixed female-male driver pairing. Marshad and Hessa found great pace early on and were some of the fastest drivers. Finally, they were knocked out by Russia in the quarter finals, and were positioned 15th overall from 28 nations, which is a great achievement as the two young karters are relatively new to competition and Hessa had never been in a kart till a month ago, and took it all in her stride.

In the F4 Cup, Mohamed Al Nusif, had a tall task having no prior experience testing in a Formula car, and had a great mountain to climb in such wet weather conditions. Mohamed struggled with technique in the early practice and qualifying sessions, but quickly found his feet to control the F4 car built specifically for the FIA Motorsport Games, making it the first hybrid-powered single-seater outside of Formula 1. It was also the first F4 car to feature a Halo safety device, which is currently in use in Formula 1, Formula 2 and Formula 3 and which isn’t due until the next generation of F4 cars till 2021.

In race one there was a safety car after Mohamed had a coming together with team Japan and suffered a DNF. Although in race two he managed to avoid danger coming in an impressive top 10th finish in the main race. 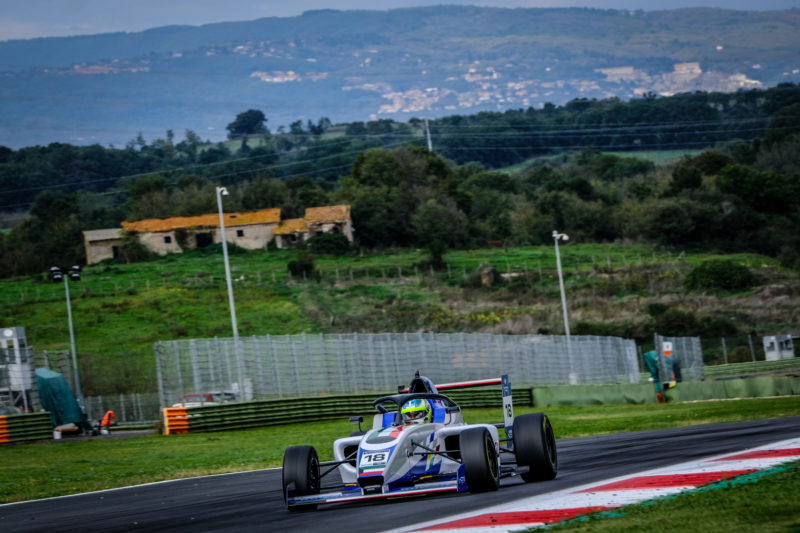 Mohamed Al Nusif– The FIA Motorsport Games was an amazing event, I wish to send a big thanks SRO and FIA for organizing such an awesome experience. And special thanks to my two engineers for their help on getting me familiarized with the new F4 beast. We had a bad first day due to issues with my seat and the steering wheel but we ended the weekend on a high. Starting the last race 18th and finishing 10th among the seasoned F4 drivers I even got a purple sector on the way. I hope to be back next year faster and stronger”. 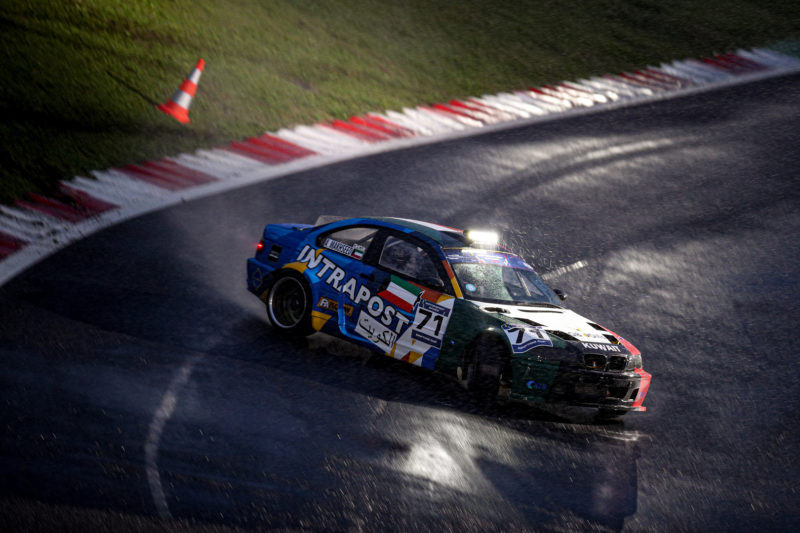 Ali Makhseed, was due to drive his Nissan 240SX, but had a last-minute technical failure so he had to opt for a quick replacement car in the BMW E46

Ali Makhseed, was due to drive his Nissan 240SX, but had a last-minute technical failure so he had to opt for a quick replacement car in the BMW E46 to compete in the Drifting Cup. The races were held on the Friday and Saturday evenings, unfortunately in torrential rain conditions Ali struggled against the weather and did not make the final shootout.

Ali Makhseed – “This was such an epic weekend, not the results we were hoping for, but we did our best under the circumstances. I’m very proud of Team Kuwait for such a remarkable achievement and to the KIMC club for organizing, it will go down in motorsport history as we were the only Arab team to compete and have set a great example to the world, competing with drivers in all the categories, I’m very proud of our team”. 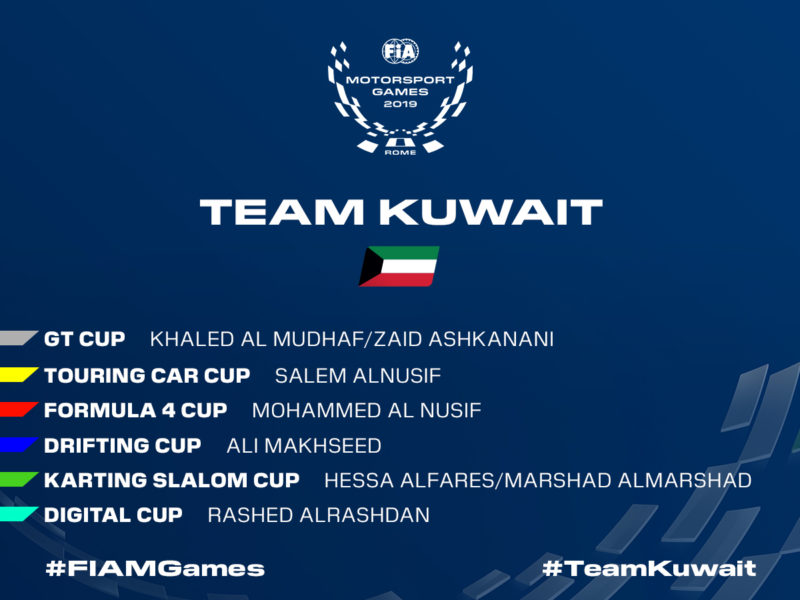