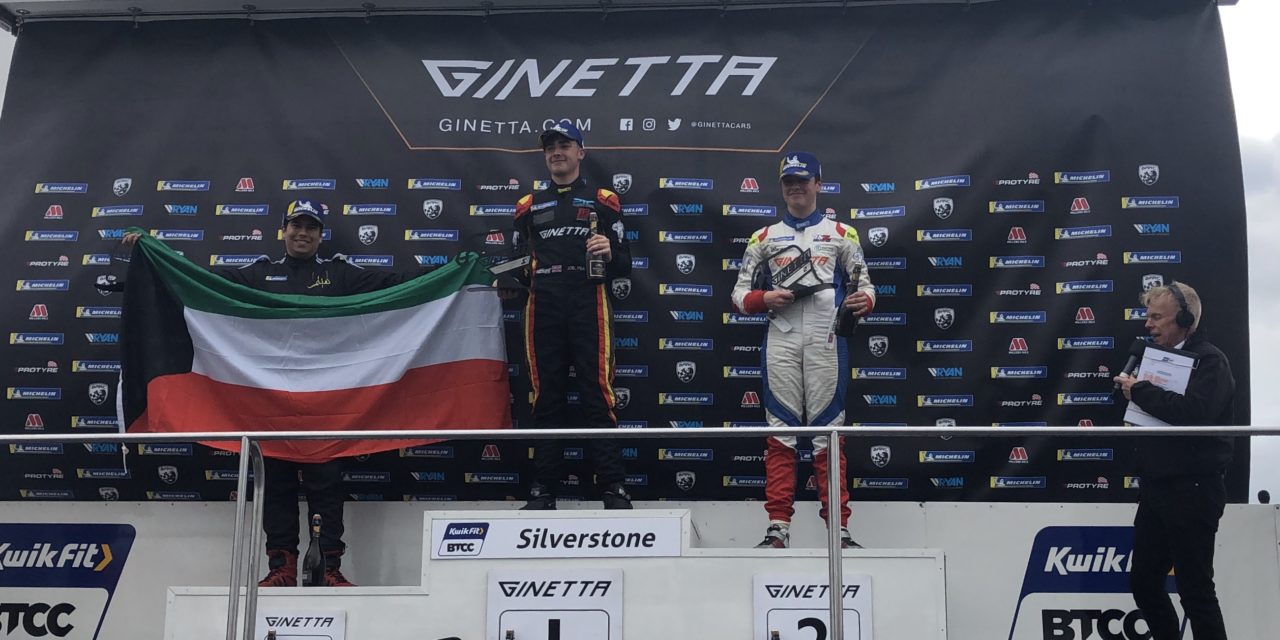 UK, Tuesday Oct 1st 2019-It was a rain soaked weekend at Silverstone for the 15yr old racer from Kuwait in the penultimate triple header round of the Ginetta Junior Championship.

Haytham is currently competing in one of the most competitive junior Championships for drivers aged between 14 to 17 years. He joined the series at age 14 years old, and turned 15 at the end of March.

As Haytham was new to the Silverstone track he was, excited but also a little nervous at the challenge ahead. During Thursday testing, on the hallowed 1.6mile Silverstone National circuit, Haytham and the team managed to iron out a few set up changes to suit the changing weather conditions.

Friday qualifying seemed to offer a more competitive prospect with a starting position of 13th from 23 cars on the grid, and Haytham was a little more satisfied with his speed, although with one red flag disrupting the session, he wasn’t able to get a clean lap to reflect his pace.

Race 1, (round 21) of the weekend took place on Saturday afternoon just as the rain cleared and the sun made a short appearance, he managed to gain four places in the opening lap, and for a further 6 laps had a tough battle with #21 car of Josh Rattican through to the chequered flag to take 8th position, just ahead of the former karting Vice Champion Rattican. 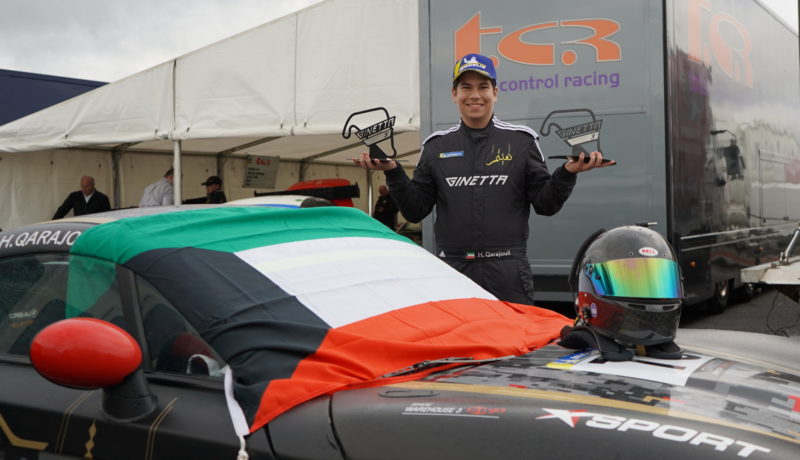 After a post-race penalty for another driver, Haytham inherited 3rd place Rookie podium and 7th position overall. Haytham also had recorded the fourth fastest speed during the race at 103.8mph and second fastest across the finish line.

Still delighted with his podium award and trophy from the previous day, Sunday would bring two more rounds for the young racer from Kuwait, in what would seem worsening of the weather conditions.

Haytham started 11th on the grid for race 2 (round 22), in the opening race of the morning in drizzling rain, and a fully wet track. Struggling for grip during the race Haytham finally settled for 11th position at the flag right where he had started.

Race 3 (round 23) would bring a complete change of luck for the young racer from Kuwait, with his best result of the season.

Later that afternoon, the heavens opened and the circuit had a few hours of heavy rainfall just before the young junior drivers took to the assembly area. 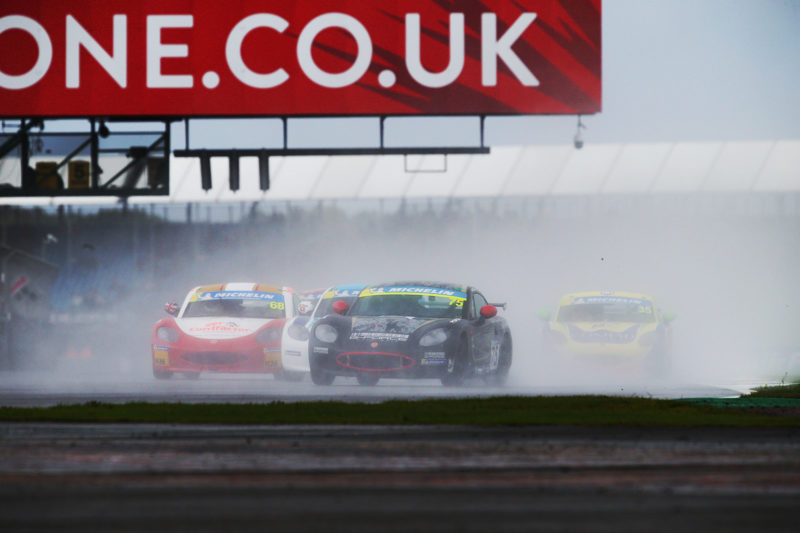 He lost a position on lap 3 and gained four by lap 5, moving up-to 9th place. In a nail-biting few laps, one of the leading cars spun off, Haytham managed to hold off the advancing car of Zak O’Sullivan just in time to take the chequered flag in 8th place overall and secure 3rd in the Rookie class, resulting in his first podium award of the season in front of a Live TV crew with millions of viewers on ITV4. Haytham is the first Kuwait driver to raise the national flag in motorsport on UK soil.

“I’m totally overjoyed at the weekends results, it’s my greatest achievement so far this season and in my career to date. As testing started on Thursday, I couldn’t dream that this result would come so soon, we worked really hard as a team on the set up, and finally it has come together. I’m confident we can have a good chance also at Brands Hatch next weekend,” commented an elated Haytham. 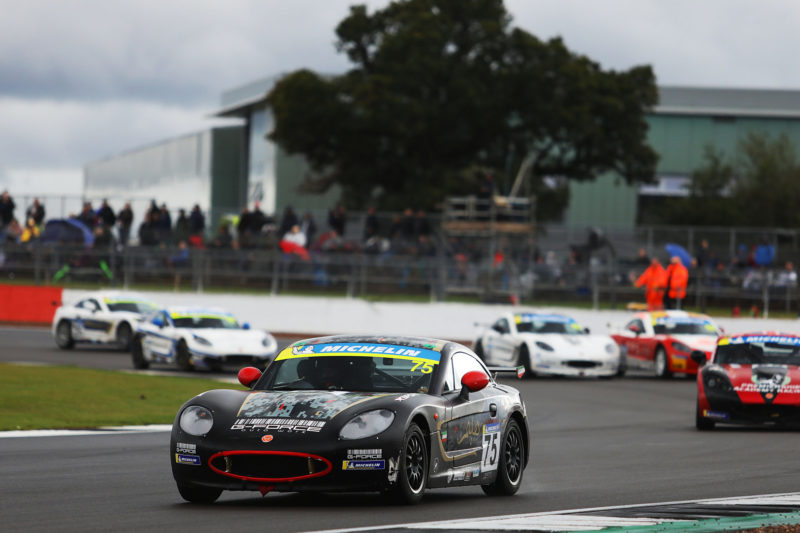 “I want to thank again all the team at Total Control Racing and my National team GForce Racing in my hometown of Kuwait. Also to my parents for all the support and encouragement and my sponsors and partners who make the racing all possible”.

“I am honoured to receive such great support and encouragement from Kuwait this weekend again from Sheikh Ali Salem AlSabah, who has been to most of my races this year, and to family friends visiting from USA”.

Next up on the calendar is Haytham’s local circuit at Brands Hatch in Kent on Oct 12-13th, and back to the circuit where the Championship began some seven months ago.

Background to the Championship

Haytham has had his ups and downs and his fair share of bumps, scrapes and crashes, since embarking on this enormous challenge back in March at Brands Hatch. Taking delivery of his brand new Ginetta G40 Junior car he joined one of the most competitive Junior Championships in the world. A series that has recently honed the talents of many successful young drivers including McLaren F1 ace Lando Norris, F3 Driver Billy Monger and Williams F1 development driver Jaime Chadwick.

The Ginetta G40 cars are all tightly controlled in terms of power which is restricted to 100bhp with a top speed of 120mph and weighs just 830kg, the engine is a sealed Ford Ztec 1.8ltr. Teams are allowed to make only minimal changes in set up to allow for a tightly controlled series, testing is controlled and just one set of Michelin road tyres are allowed per weekend to keep costs down. With the Junior drivers all between the ages of 14 and 17 years of age, none of whom even have road licences, there is naturally, nail-biting and close action every race weekend. The Ginetta Junior Championship is contested over 10 weekends, with 26 races in total. The Championship enjoys a bumper track-side audience with millions of viewers watching LIVE in UK on ITV 4.

Haytham is racing with Total Control Racing team, one of the most experienced touring car teams in the paddock, Led by Lee Brookes. Haytham is racing in the rookie class as this is his first season in the championship. Haytham has not had any prior experience in karting or any other forms of motorsport, nor taken part in the Ginetta Winter series last year, and can be classed as a true beginner to the sport. Haytham is also part of GForce Racing in Kuwait, a successful racing team participating in International motorsports since 2007.

As a support race to the famed British Touring Car Championship since 2008, the Michelin Ginetta Junior Championship has proven to be a very popular part of the package and has evolved into the most subscribed, most well-attended, most televised and ultimately, most prestigious Junior car racing championship in the UK. By offering unrivalled opportunities for driver and sponsor exposure this championship is one that is acknowledged as being a way to promote a young drivers’ talents.