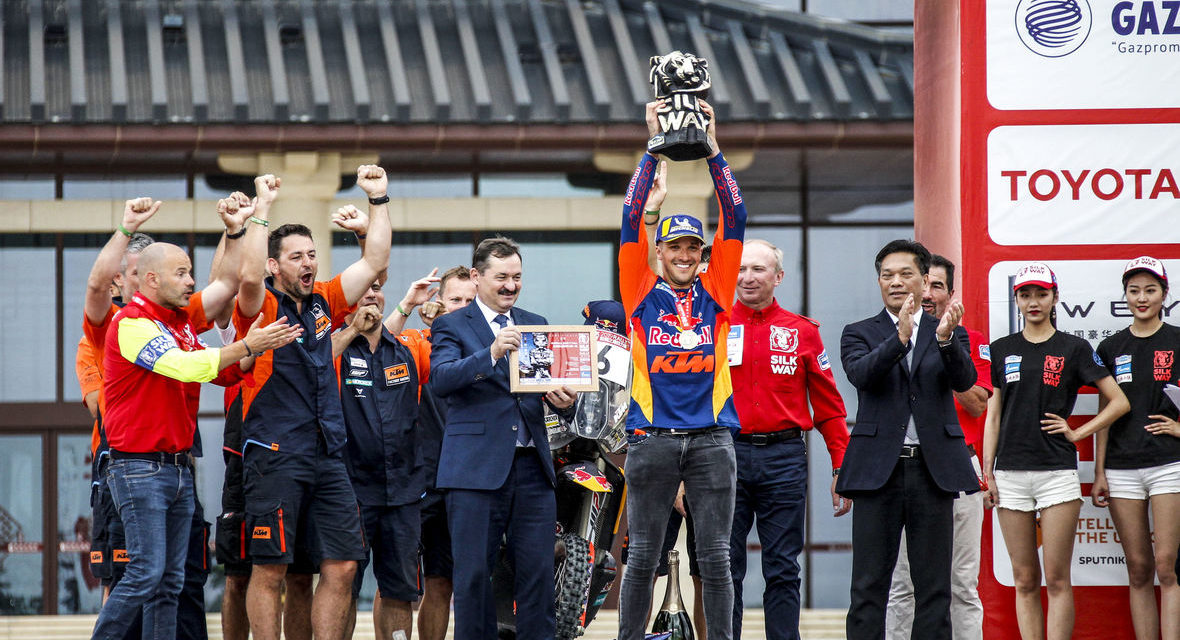 For 10 days, 24 motorcycle riders and three quad entrants tackled the first edition of the Silk Way Rally to be included in the FIM calendar. They tackled 5,003km, of which 2,588km, were timed against the clock, in addition to a Marathon stage with a Parc Ferme at the bivouac in Ulan Bator.

After administrative and technical checks in Irkutsk (Russia) – close to Lake Baikal– the riders discovered the taiga forests of Eastern Siberia and then crossed the Mongolian steppes to finish in the Gobi Desert in China. 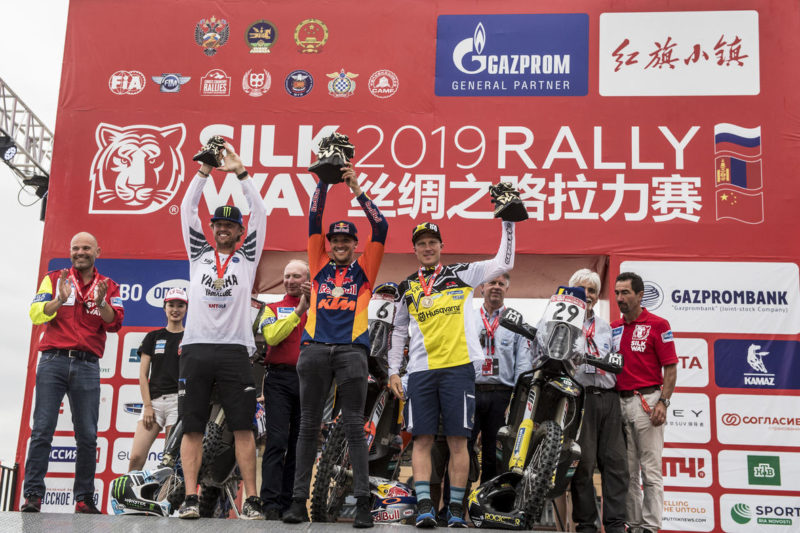 At the finish of the demanding final stage, Sam Sunderland, who had been racing with a cold, expressed his joy: “I rode quietly in this last stage, because I had a good lead on Short. I did not want to get lost and I was able to stay focused on my navigation. I am very happy to win this difficult race, because I was sick and it was not easy to manage. I love the adventure side of off-road rallies and, to discover three countries in one race, was wonderful. We crossed the forests in Russia and Mongolia. I have never in my life raced so fast on tracks and these last three days in China have been an incredible contrast with dunes and camel grass. It was a hard race but very well organised with a very nice course!”

Winner of the penultimate special stage, Andrew Short opened the road for the first time in his career on the track to get to the finish in Dunhuang. “It’s so different to ride without tracks,” he said. “An incredible experience, but at first I did not go out of my way. It was a very nice race, very well organised, a nice event that gave me a lot more!”

For his part, Adrien Van Beveren lost some time looking for a waypoint in the last Special, but maintained his place on the podium, while his teammates had bad luck. Xavier de Soultrait broke his fork in Siberia and lost two stages and, in Jiayuguan, on SS9, he broke his brakes in barbed wire. Franco Caimi ran out of fuel before refueling.

It was a mixed race for Honda. Leading the race during the marathon stage, without assistance, Kevin Benavides arrived with a non-repairable front brake issue. He then swapped parts with Nacho Cornejo – who has lost any chance of winning the Junior category. Then, in the last of the Mongolian stages, Benavides got lost in many or the parallel tracks and finished at the foot of the podium in fourth place. Joan Barreda finished the rally in ninth position after falling heavily in the Mandalgovi stage.

It was a good result for the Hero team, however. Oriol Mena won his first stage in a FIM World Championship rally and finished sixth, while Paulo Gonçalves was only 17th after being forced to change an engine.

“It was a good Silk Way Rally for Luciano Benavides as well with the honour of being top Junior. The young Argentinian had been second for a while and then made some mistakes – including the loss of his time card – which relegated him to fifth place. “It was a crazy race,” he explained. “Like a Dakar and I loved it!” 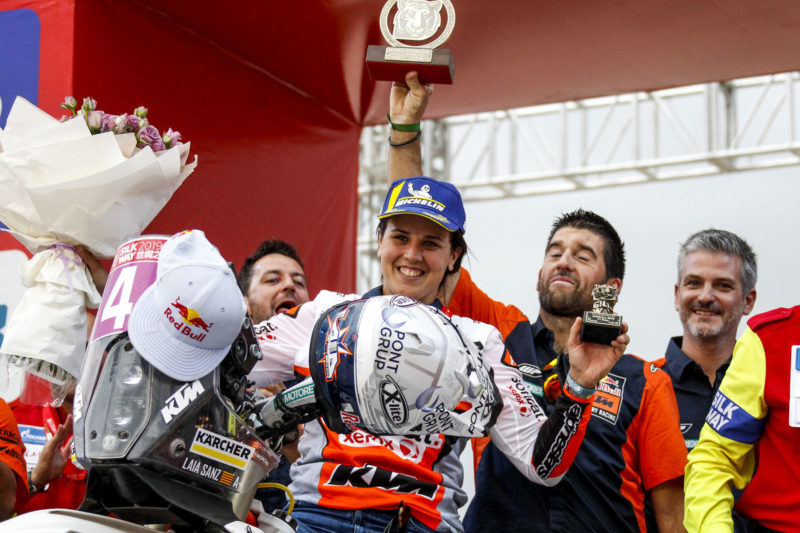 “It was a beautiful race also for Laia Sanz, who finished first in the Women’s category and took seventh overall. “I had very good stages in Mongolia,” she said. “In China, it was harder but I’m happy with my race. It was a long, beautiful and very hard race of the FIM Cross-Country Rallies World Championship!”

In the Quad category, Rafal Sonik managed his race very well and finished more than 1hr 30min ahead of Aleksandr Maksimov (Yamaha), while Lindner (Can Am) fell very heavily in the penultimate stage.
“The scenery was beautiful,” said Sonik. “I loved the forests of Siberia, maybe because I spend a lot of time in the desert. Here in China, some places look like Argentina or Morocco. I often complain about the road book but I admit that this time it was almost perfect!”

The Silk Way Rally ended on Tuesday night with a beautiful party, where Russians, Mongolians, Chinese and all the other nationalities were present to celebrate the sport, friendship and the fraternity that characterise cross-country rallies.

The next round of the FIM Cross-Country Rally Championship will take place in September with the Atacama Rally in Chile.