24H: Fifth victory for Team Phoenix and Audi at 24H of Nurburgring 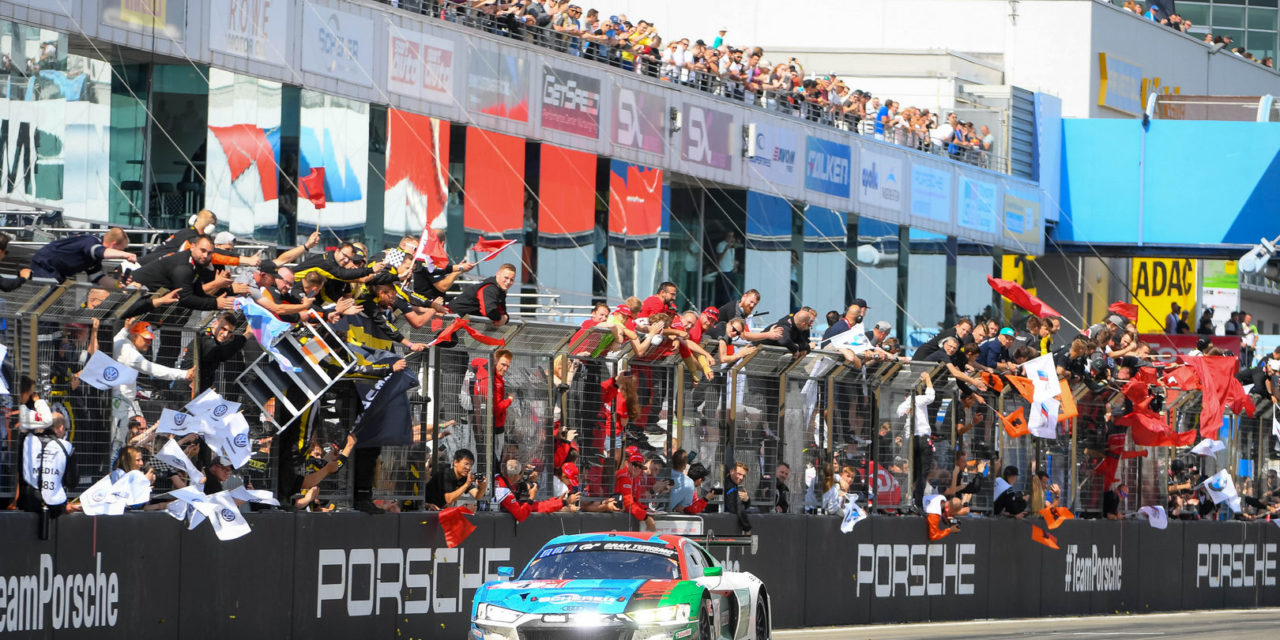 Following a completely flawless performance in the ‘Green Hell’, Team Phoenix from Neuspath won the ADAC TOTAL Nürburgring 24h Race for the fifth time. In their Audi R8 LMS, the local heroes with the German-Belgian driver line-up Pierre Kaffer, Frank Stippler, Frédéric Vervisch and Dries Vanthoor prevailed in front of 230,000 enthusiastic fans and Dries Vanthoor who contested the final stint succeeded in easily keeping at bay the second-placed Porsche 911 GT3 R #911 of their neighbours in Meuspath, Manthey Racing. With 157 laps completed and a 3,984.386 kilometres covered, Phoenix celebrated their fifth win in the ‘Eifel Marathon’, thus also giving Audi their fifth win in the prestigious event. For all the drivers apart from Stippler who already won the race in 2012 it was the first ADAC TOTAL Nürburgring 24h-Race win. 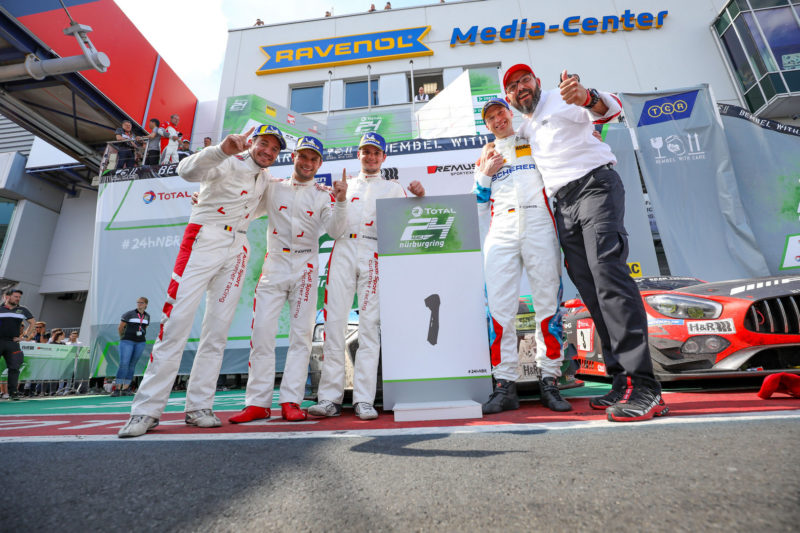 “For me, having won the 24h race at the Nürburgring represents a dream come true,” said Pierre Kaffer. “It’s my home race and it has a really big significance for me in addition to my wins at Le Mans and Sebring. I’m proud of the entire Phoenix-Audi squad and have come full circle, now, as Ernst Moser was my teacher in my early motor-racing days.” 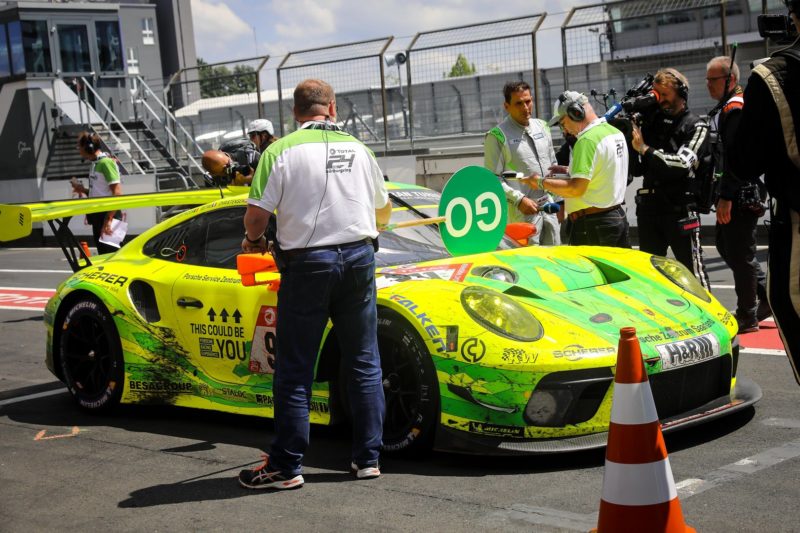 Estre and his team-mates, Earl Bamber (New Zealand), Michael Christensen (Denmark) and Laurens Vanthoor (Belgium) lost their chance of winning the race due to a 5:32-minute time penalty they received for speeding in a twin yellow flags area. The Vanthoor brothers are the first pair of siblings since 1985 that made it to the podium for two different tams. In that year, this feat was achieved by Axel und Jochen Felder.

The third and last podium was secured by Maximilian Buhk, Hubert Haupt, Thomas Jäger and Luca Stolz in the Black-Falcon-Mercedes-AMG #3. The best BMW was the Bester BMW Falken car #44 that finished seventh, while all the other five BMWs M6 GT3 were forced into early retirements, thus making for a lot of frustration in the camp of the record winners. Apart from Audi, Porsche, Mercedes-AMG and BMW, the Glickenhaus-SCG #705 and the Kondo-Nissan #45 also made into the top 10 by finishing 9th and 10th.

Duel in the early stages and fierce Audi battles

The early stages of the race were dominated by the pole-sitters, the Black-Falcon-Mercedes-AMG #2, raced by Maro Engel, and Kevin Estre in the Manthey-Porsche #911. This order lasted nearly until midnight but then, Adam Christodoulou had to park the #2. After a collision while passing a slower car, the steering gear was broken. In the night, the Glickenhaus-SCG #705 that has worked his way up consistently and held a top-three position for quite a while, had a close encounter with a slower car and the long repair stop cost it several laps

Meanwhile, the Phoenix-Audi #4 and the Land-Audi #29 entertained the crowds in the night and the morning hours with numerous enthralling slipstream battles and overtaking manoeuvres to the max. Later, the battle was even turned by the Black-Falcon-Mercedes-AMG #6 into a three-way fight and once in this battle, the Italian Black-Falcon driver Gabriele Piana pushed René Rast with a rather rmerciless move off the track and onto the grass. Rast succeeded in getting his car under control again and continue the race.

‘Musical Chairs’ in the way to the podium

A short time later, the ‘Musical Chairs’ with the potential winners and podium contenders on the way to the podium got really going. At first, Maximilian Götz lost the Mann-Filter-Mercedes-AMG #48 due to a previous damage all of a sudden in the Hohe Acht area and crashed into the crash barriers, and then the Frikadelli-Porsche #31 was forced into retirement from second place. Three hours before the race was over, the race control imposed a 5.32-minute time penalty on the clearly leading Manthey-Porsche #911 for crossing the speed trap in a twin yellow flag 120kph zone at 172 kph. After having served the penalty the Porsche rejoined the race in second position behind the new leaders, the Phoenix-Audi #4, that took the lead as the Audi #29 had to retire because half the bodywork was destroyed after a tyre damage and the Black-Falcon-Mercedes-AMG #6 had an accident and was forced into retirement before the race control could respond to the Piana move. Afterwards, the Porsche tried hard but in vain to close in on the Audi.

In the run-up to the 24h Race, Benjamin Leuchter made for the first win in the Touring Car World Cup (FIA WTCR) by making perfect use of his pole position for the third race by securing the first triumph in his career. “This win means a lot to me,” said the young German. “Prior to the weekend I kept my expectations low and therefore, it’s just fantastic that I made it. Furthermore, the unofficial half-time championship was secured by the German Team All-inkl.com Münnich Motorsport and the team’s driver Esteban Guerrieri defended his lead in the drivers’ championship with a pole and two podiums.