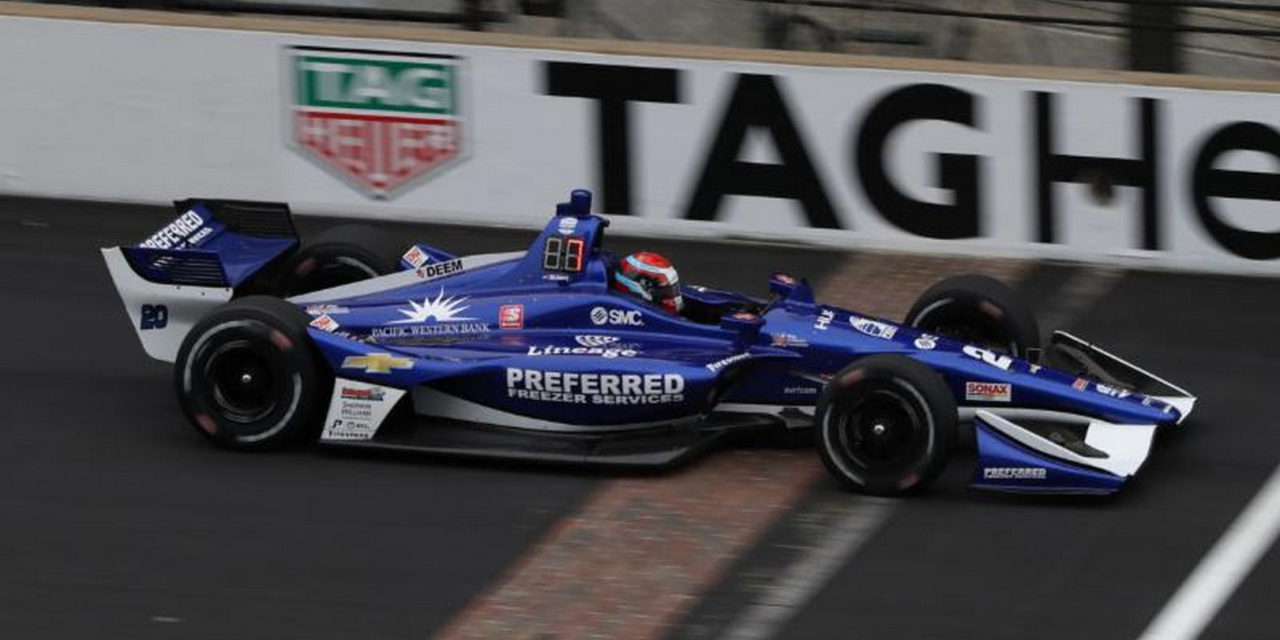 May 11th – After solidifying his highest starting position of the year yesterday, Ed Jones #_edwardjones followed that up with his strongest finish of the season.

He started 6th in today’s 85-lap race around the Indianapolis Motor Speedway road course, driving his way all the way up to the 2nd position. Though he fell back to 18th after contact with another car, a timely switch to rain tires moved him back to the front of the field. He finished 6th in the INDYCAR Grand Prix.

The Ed Carpenter Racing teammates of Spencer Pigot and Ed Jones brought home their best finishes of the 2019 NTT IndyCar Series season today on the Indianapolis Motor Speedway road course. Pigot earned his first Top 5 of the year with a drive up to the 5th finishing position in the INDYCAR Grand Prix. Ed Jones was just behind in 6th, meeting the team’s goal of building strong momentum to kick off the Month of May.

Yesterday, Ed Jones turned in his best qualifying effort of the year as he made the Firestone Fast 6 and rolled off in the 5th starting position. For the second time in three races, Pigot advanced to the second round of qualifying and took the green flag from 12th. Both drivers started the race on a set of Firestone’s alternate red Firehawks. Jones maintained his starting position for the first 10 laps while Pigot gained five positions and was up to 7th.

The first yellow flag flew on Lap 11, followed by another on Lap 16. On the Lap 19 restart, Jones passed two cars heading into Turn 1 and moved up to the second position. Jones closed in on race leader Scott Dixon, but had to bring his No. 20 Ed Carpenter Racing Scuderia Corsa Chevrolet in for his first pit stop on Lap 25. Pigot, who had raced his way up to 5th, stopped one lap later. Both selected a set of scuffed red Firehawks for their next stint.

Five cars in front of Jones and Pigot were on an alternative strategy. Once they had made their pit stops, Jones was back to 2nd and Pigot was 5th. On Lap 42, Jones and another car made contact, causing him to drop two positions. He came into the pit lane a few laps earlier than planned to make sure the No. 20 had no damage. He rejoined the race in 18th. Pigot brought the No. 21 Autogeek Chevrolet in at his scheduled time, Lap 47, exiting the pit lane in 13th.

As the field again cycled through their pit stops, Pigot moved up to 9th, though Jones was mired in 16th. The rain that had been persistently falling all race had picked up to a point where both the No. 20 and 21 crews had wet tires ready. On Lap 59, Helio Castroneves went off-course. Anticipating a full course caution, both ECR cars dove into the pit lane for wets. The gamble paid off as the yellow flag flew the next lap. Everyone who had not yet stopped for wets came in when the pits opened, vaulting Pigot and Jones forward. For the Lap 68 restart, Pigot was in 3rd while Jones was in 5th.

At the restart, Pigot was shuffled backwards. Jones was able to get past him, putting Jones in 5th and Pigot in 6th. With three laps to go, Pigot took the spot back, giving them their final finishing positions. Pigot would finish 5th while Jones took the checkered flag in 6th. Today’s results were welcome for both drivers as a multitude of unfortunate circumstances had kept Pigot’s best finish of the year to 11th while Jones’s was 14th.

When the checkered flag fell, Ed Carpenter Racing immediately shifted their focus to the Indianapolis 500 and began final preparations on the team’s three-car lineup. Pigot will remain in the No. 21 while Jones moves over to the No. 63 Ed Carpenter Racing Scuderia Corsa Chevrolet. Team owner and oval driver Ed Carpenter will step back into the No. 20 Preferred Freezer Services Chevrolet. Practice for the 103rd running begins on Tuesday, May 14. Qualifying will take place on Saturday, May 18 and Sunday, May 19. The 200 lap, 500-mile race will be held on Sunday, May 26, 2019.

ED JONES, No. 20 Ed Carpenter Racing Scuderia Corsa Chevrolet, Finished 6th: “We didn’t know when to expect the rain so we didn’t want to pit at the wrong time! It wasn’t too bad when the rain was lighter as the cars on track help to dry it. The yellow at the end made it interesting, but everyone was already on the same strategy. It was quite a good weekend as it was the first solid race we’ve had this year. It feels good to have this result going into the Indy 500. Now we get to focus on the oval, I’m excited to see the red and white car on track!”