Dakar: A new chapter in the history of Dakar as the world’s biggest Rally makes its debut in Saudi Arabia 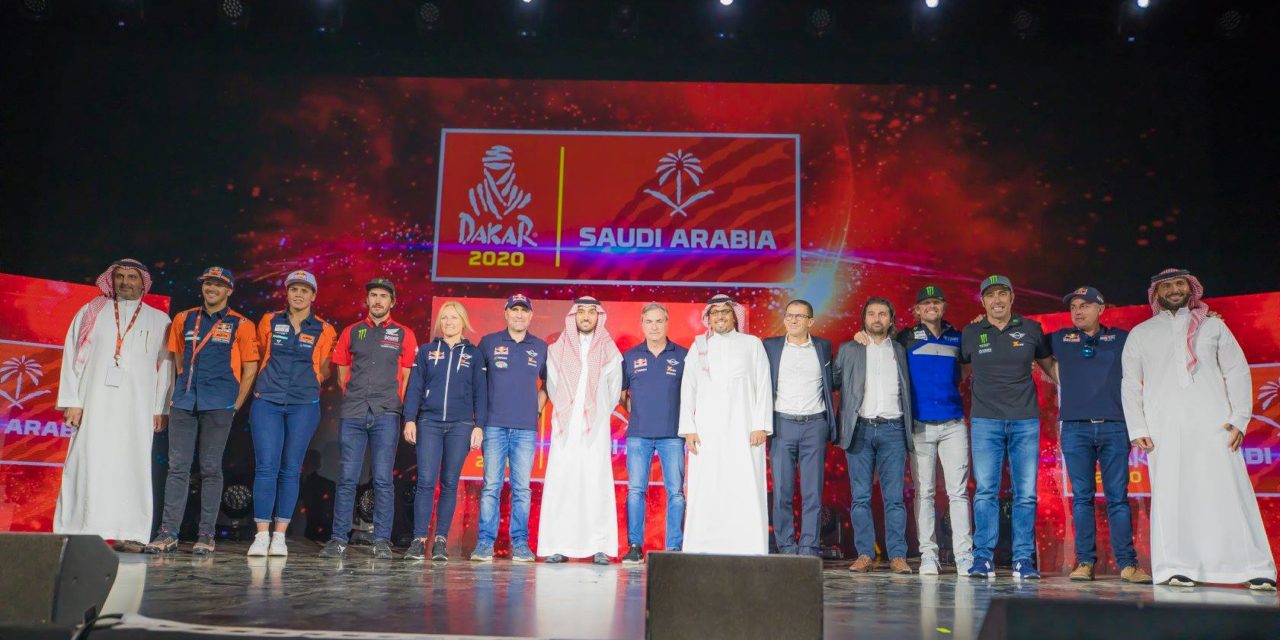 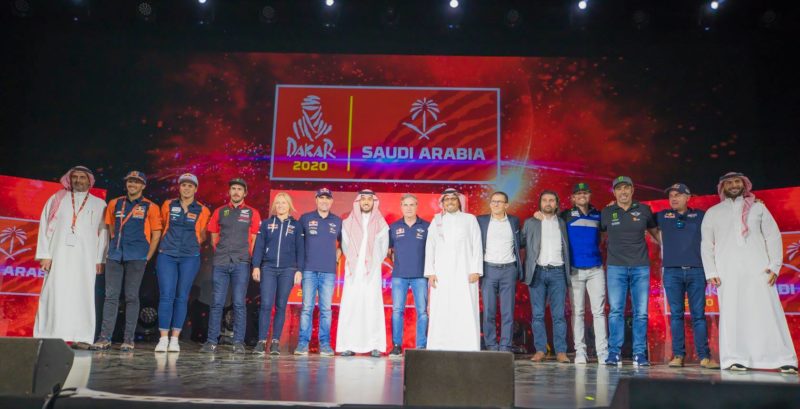 The 42nd edition of the Dakar will be held in Saudi Arabia, the largest country on the Arabian Peninsula, from 5 to 17 January. The rally, which began its nomadic life in Africa and then jumped to South America, has made Asia its new home.

Jeddah, the economic heart of the country, will host the start of the rally, launching a journey of more than 9,000 kilometres to the future Qiddiya complex, not far from Riyadh, where the rest day will take place.

Come January 2020, the Dakar will make its first foray into its 30th host country, Saudi Arabia. After three decades in Africa and eleven editions held in South America, the drivers, riders and crews of the greatest rally on Earth are invited to write a new chapter of its history in the largest country in the Middle East. The lands of Saudi Arabia, extending from the Red Sea in the west to the Arabian Gulf in the east, contain vast desert expanses with a mosaic of terrains and all the ingredients for a well-rounded route in line with the mentality of rally raids: rewarding competent driving and riding and speed, putting navigational skills to the test and pushing the stamina of the competitors to the limit.

Classic Dakar concepts such as adventure and discovery will feature heavily in the rally as it heads into these sparsely inhabited regions where the drivers and riders have never raced before. The uncharted terrain will make sure that none of the pretenders to the crown has a home field advantage. The mountain areas near the border with Jordan will take the competitors deep into a maze of valleys, while the dunes in the “Empty Quarter” —some of which rise to over 250 metres high— will set the stage for dune-surfers to shine.

The South American connection Argentina, Chile, Peru, Bolivia and Paraguay have hosted the Dakar for a decade. Their jaw-dropping landscapes stole the hearts of drivers, riders and TV viewers around the world, as did the warm welcome of the aficionados on the roadsides. In order to preserve the rally’s links with South America, whose drivers, co-drivers and riders made up about a third of the field in 2019, a battery of measures will be taken to facilitate the shipment of vehicles and provide
communication tools.

His Royal Highness Prince Abdulaziz bin Turki AlFaisal Al Saud, Chairman of the Saudi Arabia General Sports Authority.
“The vision and guidance of our leaders have made our dreams and ambitions limitless and have set the sports scene in the Kingdom on a remarkable success route. Today we are thrilled to announce that Rally Dakar, an event with a huge global appeal is coming to the Kingdom of Saudi Arabia and the Middle East for the first time. Our country is extremely passionate about sport and our strategic goal is to feed that appetite as we move further towards achieving Vision 2030, of which sport is a basic pillar.

In hosting Dakar Rally we aim to produce an unbelievable and unforgettable experience for drivers as they discover the beauty of Saudi nature and a unique spectacle for motorsport fans not only in Saudi Arabia but also in the region and around the world.”

HRH Prince Khalid Bin Sultan Abdullah Al Faisal, Chairman of the Saudi Arabian Motor Federation
“I have always wanted to participate in Dakar Rally. While I wasn’t fortunate to achieve that ambition, I’m now part of achieving a much bigger dream for my country as Dakar comes to the Middle East region for the first time ever.
The vision and support of HRH Prince Muhammad Bin Salman and the trust that GSA president HRH Prince Abdul Aziz Bin Turki Al Faisal had put in us were key to our efforts to secure the hosting rights for an event of such a global magnitude.”

David Castera, Director of the Dakar.

“Looking back at my first memories of the Dakar and my first experiences as a competitor, I’ve always considered that this rally like no other carried a concept of discovery, a voyage into the unknown. By going to Saudi Arabia, it is of course that aspect that fascinates me. I’m convinced that such a feeling will be shared by all the riders, drivers and copilots. As the director of the event, it’s a massive challenge to be faced with a blank page with limitless possibilities.

I’m already inspired and delighted to have to design a course in such a monumental geography, made for the most audacious itineraries. We are spoilt for choice. Sports, navigation, a will to surpass oneself: all these aspects will naturally be glorified on this territory made for rally-raids.”

Jeddah, the economic heart of the country, will host the start of the rally, launching a journey of more than 9,000 kilometres to the future Qiddiya complex, not far from Riyadh, where the rest day will take place.
Totally 12 stages on this vast country and its mosaic of deserts, mountains, canyons, valleys and coastal landscapes.

The grandiose and varied landscapes of the 30th country to host the Dakar have all the ingredients for a well-rounded route. The same diversity characterises the three cities that will mark the decisive phases of the rally. Jeddah symbolises the country’s deep historical roots, while the capital Riyadh evokes the power of a kingdom resolutely turned towards the future, as exemplified by the Qiddiya project.

2 TO 5 JANUARY: SCRUTINEERING AND START

Home to 3.5 million people, the second-largest city in the country is also its economic heart thanks to its commercial port on the Red Sea, which goes back to the 7th century. Just for once, the gateway to the holy cities of Mecca and Medina will also be a launch pad for the drivers, riders and crews of the Dakar. King Fahd’s Fountain, which ejects water at a speed of 375 km/h, and Jeddah Tower, which will soon reach a height of 1,001 m, will inspire the competitors with grandiose ideas and a burning ambition.

The sprawling orchards that gave the city its name («gardens» in Arabic) in the 18th century have mostly given way to an urban area extending over more than 1,500 km2 (versus 105 km2 for Paris and 203 km2 for Buenos Aires) and home to over six million people. The demographic growth of the capital since the 1970s has gone hand in hand with the building of striking skyscrapers born from revolutionary architectural ideas, including the 267 m Al Faisaliyah Centre, 302 m Kingdom Centre and 307 m Burj Rafal.

The Dakar will be the first world-class sporting event held in Al Qiddiya, a city whose foundation stone was laid in 2018 and which will be focused on entertainment and culture. The vast complex, located about 40 kilometres from Riyadh, will include attractions such as a theme and amusement park, world-class sports facilities and multidisciplinary art centres. It is set to open to the public in 2022.

Saudi Arabia stretches over more than two million square kilometres —about four times the surface area of France. The largest country in the Middle East, whose population is concentrated in the towns and cities close to the sea, boasts a mosaic of landscapes that will put Dakar competitors through their paces on all fronts: driving and riding, navigation and endurance. It is a call to adventure.

To explore the contrasts

The available spaces offer the opportunity to take competitors on a real tour of Saudi Arabia, with each stage having its own specific landscape and idiosyncrasies. A wide range of landscapes will colour the rally, including canyons, dunes, mountains, wadis and more. It is a delight for the senses… and an ordeal for bodies and vehicles.

Close to the border with Jordan, mountain climbers can crown Jabal el Lawz —the Mountain of Almonds—, peaking at over 2,500 metres above sea level. For Dakar competitors, however, this vast mountain region that extends all t he way to Ha’il Region will be more of a maze. Top navigators will be able to make the difference by staying on course as they zigzag their way through the valleys.

Sand as far as the eye can see

In the far south of the country, almost a quarter of the country remains unsettled except for a handful of villages and oases. This immense and pristine area gives rally raid lovers a lot to work with. Even expert dune surfers will be put through the wringer with dunes over 250 metres high, while lesser drivers and riders are in for a very bad time.