WSBK: Bautista makes it six out of six wins in Thailand 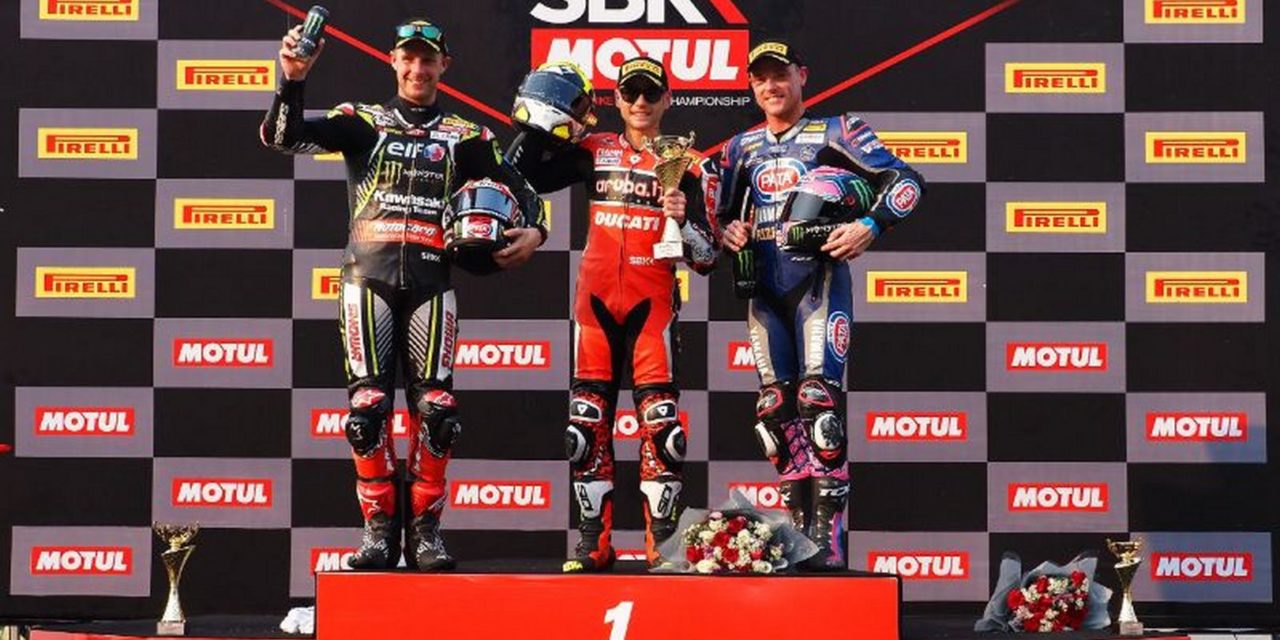 In what has been a dream opening six races in Alvaro Bautista’s WorldSBK career, he took yet another race win to become the first rider since Neil Hodgson to win the opening six races of a WorldSBK season, back in 2003! Bautista completed another lights to flag victory in dominant fashion on his way to more records!

With lights turning green, the final race of the Pirelli Thai Round got underway, with Alvaro Bautista ( ARUBA.IT Racing – Ducati) able to hold onto first position from start to finish. Jonathan Rea (Kawasaki Racing Team WorldSBK) couldn’t take a challenge to Bautista but had to deal with Alex Lowes (Pata Yamaha WorldSBK Team) in the early stages. At the end of the first lap the leading trio had a slight gap over Leon Haslam (Kawasaki Racing Team WorldSBK), Michael van der Mark (Pata Yamaha WorldSBK Team) and Marco Melandri (GRT Yamaha WorldSBK).

Soon, the big battle came from the scrap for fifth position, with van der Mark, Melandri, Sandro Cortese (GRT Yamaha WorldSBK) and Chaz Davies ( ARUBA.ITRacing – Ducati). Turn 3 was once again a prime overtaking area, with Melandri trying a move on van der Mark at Turn 3, with both running wide and allowing Chaz Davies to get a better drive down the straight and by Turn 4, the Welshman had got ahead of both Yamaha riders!

Melandri retook Davies at Turn 8 but the race winner from Buriram in 2018 fought back at Turn 12. Cortese and van der Mark made the exact same succession of moves; a thrilling spectacle in the early stages.

Luck wasn’t going the way of Tom Sykes (BMW Motorrad WorldSBK Team), who had to retire his S1000RR on lap four. Melandri and Davies had a close call on the same lap, with the Italian forcefully moving aside his former teammate at Turn 9, allowing van der Mark to go through, whilst Chaz Davies had to recover right at the back of the group. It wasn’t long however before Davies himself would suffer the same fate as Sykes. The 29-time WorldSBK race winner retired on lap eight, concluding a wretched start to the season.

Whilst the front eight remained fairly static in an intriguing battle, further down the field, Toprak Razgatliolgu (Turkish Puccetti Racing) began to reel in Jordi Torres (Team Pedercini Racing) and got ahead of him in the final part of the race to win the battle of the Independent Kawasaki riders.

Bautista dominated to take the victory by more than ten seconds, ahead of Jonathan Rea and Alex Lowes. Michael van der Mark was able to hold off a late charge by Leon Haslam, whilst Marco Melandri finished in sixth position for a fifth race in a row. Van der Mark’s fourth place means he stretches his finishing run to 21.

Behind the leading six, Sandro Cortese became the first German since Max Neukirchner in 2008 to finish six consecutive races inside the top eight, with his seventh position. Eighth belonged to Michael Ruben Rinaldi (BARNI Racing Team), a great performance on his debut in Thailand. Razgatlioglu managed to hold off Jordi Torres as they completed the top ten.

With only three more finishers it was Markus Reiterberger (BMW Motorrad WorldSBK Team) in 11th, with Ryuichi Kiyonari (Moriwaki Althea HONDA Team) in 12th on his debut in Thailand, whilst Alessandro Delbianco (Althea Mie Racing Team) scored his first WorldSBK points with 13th. Eugene Laverty (Team Goeleven) failed to start, whilst Argentine, Leandro Mercado (Orelac Racing VerdNatura) retired after just one lap. Leon Camier (Moriwaki Althea HONDA Team) and Thitipong Warokorn (Kawasaki Thailand Racing Team) didn’t start due to their Tissot Superpole Race crash.
P1 – Alvaro Bautista ( ARUBA.IT Racing – Ducati)“I don’t know what to say. I think this weekend has been perfect for us because we dominate in all of the practices and all of the races. I want to say thanks to Ducati and to my team, we are working with a completely new bike, arriving at completely new tracks and we have to work for a set-up to make a good base. Here, we knew it would be difficult because in the last eight races, seven have been won by Kawasaki. At the end, we manage to have the same feeling that we have in Australia and we can be competitive. I am very, very happy!””.

P2 – Jonathan Rea (Kawasaki Racing Team – WorldSBK)“Second now is my normal position this season! That was our position this weekend for sure, we could do no more. Alvaro and Ducati did a very good weekend. I felt like I got the best out of the package, I tried something in the Tissot Superpole Race but that didn’t really work, so we went back to what we knew. Thank you to my team for working so hard all weekend and we have to be happy with these results now that we go to Europe. We just have to try and close the gap to the front!”.

P3 – Alex Lowes (Pata Yamaha WorldSBK Team)“Three podiums is fantastic for us, I am really happy with the weekend, we did a strong job. I want to say a ‘thank you’ to all the Yamaha Thailand fans, they’ve been fantastic and really supporting me. It is really nice to be part of the Yamaha family and hopefully, we can get a bit closer to the green and the red bike at the Aragon Round! Cheers guys!”.