MotoGP: Viñales lights up Losail for pole Yamaha, Ducati and Honda get ready for a showdown 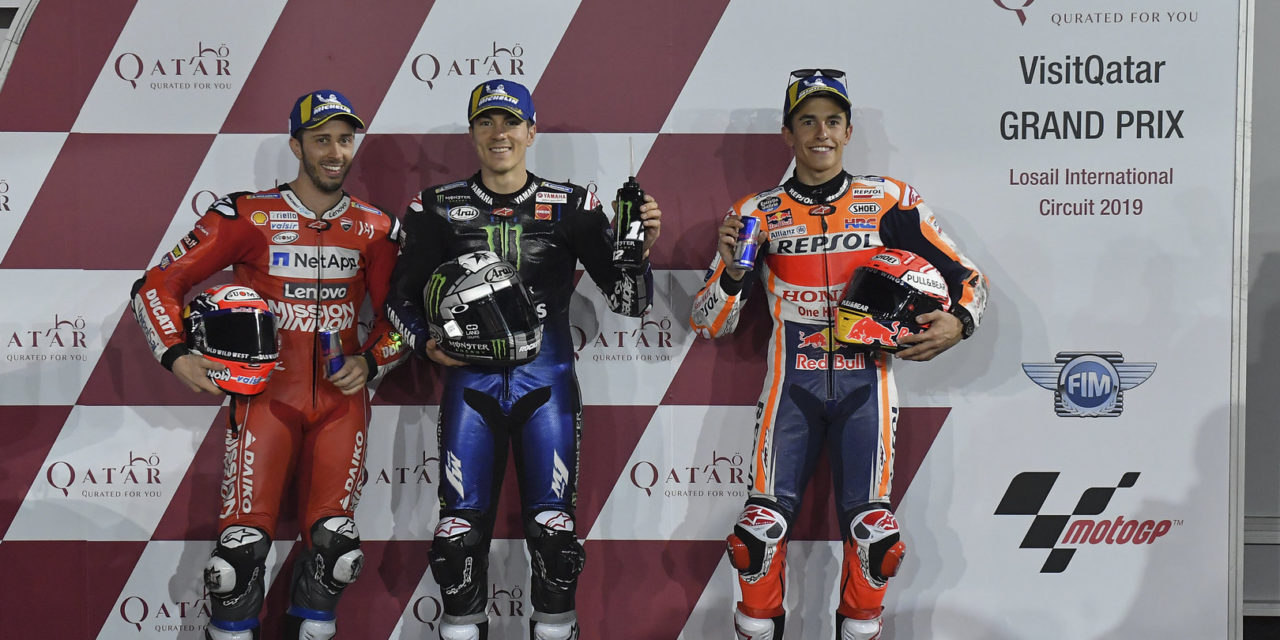 Losail – Saturday, 09 March 2019– Maverick Viñales (Monster Energy Yamaha MotoGP) has taken the first MotoGP pole position of the 2019 season at the VisitQatar Grand Prix, a 1:53.546 enough to give him a little breathing space ahead of Andrea Dovizioso (Mission Winnow Ducati) and Marc Marquez (Repsol Honda Team), who join him on the front row of the grid. Viñales was two tenths clear, but the gap between Dovizioso and Marquez was an infinitesimal and mouth-watering 0.001. Three previous winners and three different manufacturers on the front row, the first qualifying session of the season sets a stunning scene for Sunday.

Fabio Quartararo (Petronas Yamaha SRT) impressed early as the rookie initially shot to the top of the times, only to be beaten almost immediately by Q1 graduate Takaaki Nakagami (LCR Honda Idemitsu). That’s when Viñales struck, storming to the summit with a lap that was 0.741 quicker than anyone else. Quartararo and Nakagami exchanged second fastest laps to leave the Japanese rider 0.395 off as the field headed in for a change of tyres, but it was soon about to change.

Viñales led the troops back out for their second runs and the goalposts were moved once more. Three more tenths were shaved off his best time, with Miller then slotting into P2 and just 0.2 off. The Australian crashed at Turn 2 soon after though, ending his hopes of pole and leaving his time under threat. Dovizioso needed no second invitation, making a move into second place soon after. The Italian looked set to challenge Viñales again as he went over a tenth under after the first split, but the lap was gone by the second sector; his qualifying effort over.

Attention then turned to Marquez, who was on the tail of Danilo Petrucci (Mission Winnow Ducati Team) as neither sat on the provisional front row with little time left. Tactics on point, the reigning World Champion was able to snatch P3 from Miller. Encouraged by the front row at a difficult track, the number 93 is ready to fight it out on Sunday.

Miller therefore heads up the second row as top Independent, but it was a pretty close challenge from Quartararo by the end of the session. The French rookie retained his stunning pace so far and lines up fifth, just a tenth and a half off the Aussie. Cal Crutchlow (LCR Honda Castrol) completes an all-Independent second row, with plenty of honour – and points – up for grabs for each. 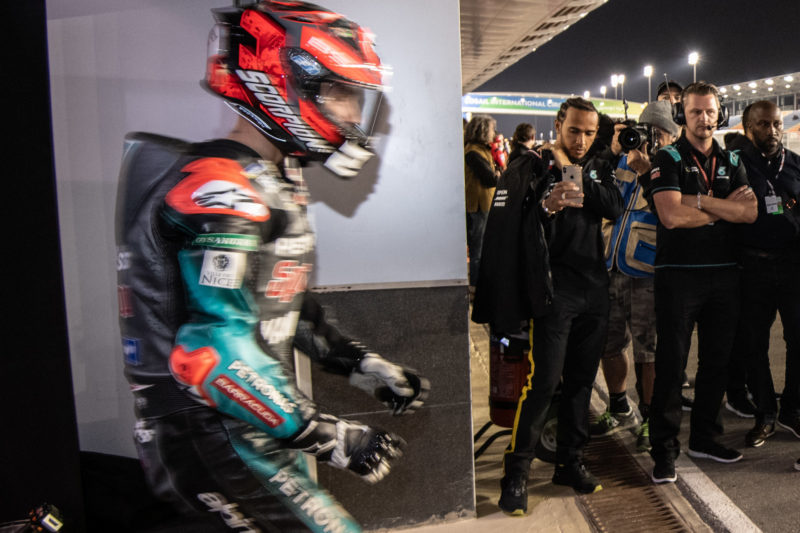 Quartararo heads out as Hamilton looks on

Petrucci starts seventh and, after outpacing teammate Dovizioso for much of testing, will be gunning to move forward on race day and battle for his first victory. Franco Morbidelli (Petronas Yamaha SRT) is P8, with Nakagami eventually knocked down to ninth. Alex Rins (Team Suzuki Ecstar) completes the top ten and was a crasher on Saturday – another who’ll be looking for much more once the lights go out. Rookie teammate Joan Mir is right behind him.

Can Rossi and Lorenzo fight through the pack? Will the front row starters become the battle for the win? Can the likes of Petrucci and Rins push forward? And which of the rookies will win the battle for top honours once we’re racing?

It was the first time the intermediate class had taken part in a Q1, Q2 format qualifying and it was Schrötter who set the early pace before creating his own first. Pole set on his sixth flier, he ended the session 0.146 ahead of Vierge, with Baldassarri jumping up the timesheets in the latter stages to grab a front row start – just 0.199 from pole.

After progressing from Q1, Luca Marini (Sky Racing Team VR46) put in a good shift in Q2 to head the second row in fourth, although it could have been better if not for the Italian crashing at Turn 2 with just over two minutes to go. Gardner starts fifth, ahead of Sam Lowes (Federal Oil Gresini Moto2) in sixth, 0.260 from pole.

Tom Lüthi (Dynavolt Intact GP) will line up seventh on his first start since returning to the Moto2™ class, the Swiss rider 0.419 off his teammate’s pole lap, with Brad Binder (Red Bull KTM Ajo) joining him on the third row in P8. Alex Marquez (EG 0,0 Marc VDS) will lineup ninth for the opening race of the year, with fellow Spaniard Augusto Fernandez (Flexbox HP 40) completing the top ten.

A cracking qualifying in Qatar sets us up nicely for the first Moto2™ race of the new Triumph era. Who will take victory? Find out when the intermediate class go racing at 18:20 local time (GMT+3) on Sunday.

Canet storms to opening Moto3™ pole
Two tenths clear of the rest in a manic debut Q2, the Spaniard stayed in his Friday form

Sterilgarda Max Racing’s Aron Canet clinched the first Moto3™ pole position of the season in impressive fashion at the VisitQatar Grand Prix, the only man the go beneath the 2:06 barrier and eventually finishing just under two tenths clear of the chasing pack with a 2:05.883. The front row is completed by two men starting from there for the first time: Lorenzo Dalla Porta (Leopard Racing) in second, although he was on the podium at Losail last season, and Kaito Toba (Honda Team Asia) in third.

John McPhee (Petronas Sprinta Racing) starts from fourth and could be one to watch as a former podium finisher at the venue too, impressing in the first ever Moto3™ Q2 despite coming through Q1. SIC58 Squadra Corse’s Nicollo Antonelli, who starts fifth, is another with a top record as the Italian won in 2016. He recovered from a crash at Turn 10 with seven minutes left on the clock in Q2.

A hugely frustrated Romano Fenati (Snipers Racing) had to settle for eleventh on the grid after not leaving pitlane for his last attempt at taking pole position until there was exactly two minutes remaining, meaning the chequered flag came out before he could start a final flying lap. Can he fight back through in the race? Find out from 17:00 (GMT +3) on Sunday.