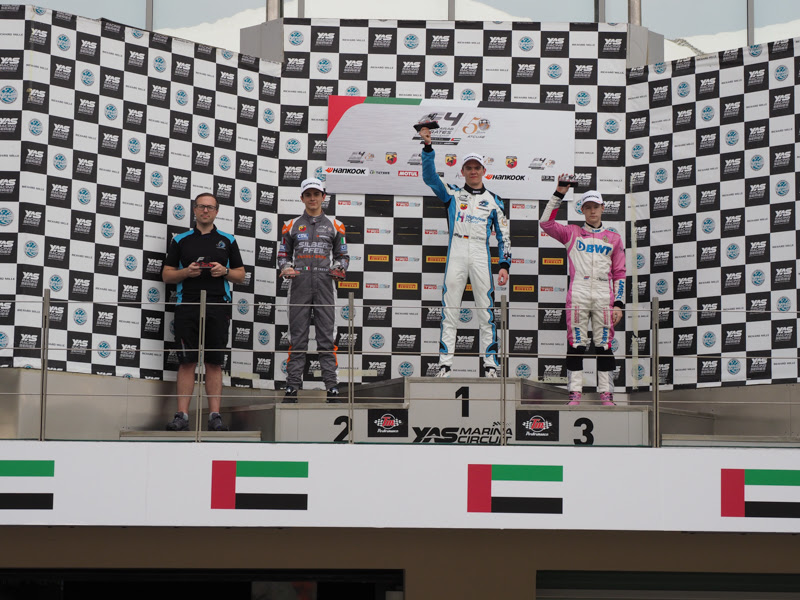 Abu Dhabi, UAE, February 25, 2019 – Xcel Motorsport’s Matteo Nannini has extended his championship lead in the 2019 F4UAE Championship powered by Abarth, after winning two races at the penultimate round at Yas Marina Circuit, while Dragon Racing’s Lucas Roy also raced to a double victory at what was his best weekend in open-wheelers.

Coming into Round 4 in Abu Dhabi with just a 17-point lead, the Italian rookie’s strong performance saw him extend his margin to 55 points clear of current championship runner-up, Joshua Dürksen of Mücke Motorsport, with just one weekend of racing left this season.

Four drivers have emerged this season as title contenders, with Roy (#8), Dürksen (#27) and Omani racer Shihab Alhabsi (#34) all sharing wins. However out of the 12 races contested in 2019 so far, it’s 15-year-old Nannini who has been victorious in six in total, helping take his Dubai-based team Xcel Motorsport to the lead of the Teams Championship as well.

“We are witnessing very high level of competition in F4UAE this year, and with one round to go it is exciting that we will be crowning a new champion soon,” said Mohamed Ben Sulayem, President of ATCUAE and Emirates Motor Sport Federation, and FIA Vice President for Sport. “Some drivers had a difficult weekend, while others had very good results, but we hope that all of these young drivers are focused on learning as much as they can about their racing craft while here in the UAE. We wish them all the best at the grand finale in Dubai this week.” 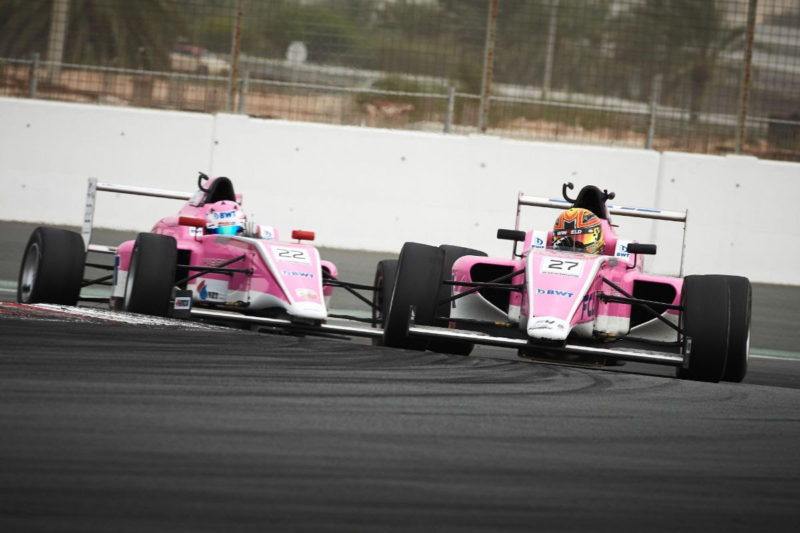 QUALIFYING SUMMARY
Once again racing on the 5.555km international circuit configuration at Yas Marina Circuit, a 10-car entry list headed for qualifying on Friday morning. Nannini clocked the fastest time of 2m11.427s, enough to give the rookie his third pole position of 2019; a time that was also just shy of two seconds faster than pole position earned by Dürksen at Round 2.

RACE SUMMARIES
Having dominated the practice and qualifying timesheets all weekend, Nannini and Alhabsi started on the front row for Race 1, followed by Dürksen third and CRAM Motorsport’s Filip Kaminiarz (#55) putting in his best qualifying performance to start fourth.

Nannini and Alhabsi lead the field until lap three when the Omani driver was turned around by Dürksen at the end of the back straight. The Paraguayan had finished the 25-minute race in second place but was given a 10-second post-race penalty for the altercation which dropped him to fifth. The change in position elevated Roy into second place and his Dragon Racing teammate Rui Andrade (#88) to third – his third podium finish of the season – while the third Dragon steerer Rashed Ghanem (#9) earned his best finish of the year in fourth.

For the first of the reverse-grid races, Dürksen started at the rear of the inverted top-six drivers due to the penalty, with the championship leader Nannini starting fifth. Kaminiarz started from pole alongside Lebanese rookie Ghanem; the latter leading for the first half of the race before being swamped by his faster competitors – including teammates Roy and Andrade who finished first and second, with Nannini third. Alhabsi again had a tough race, retiring after sustaining damage caused by being caught up in an incident involving Dürksen and Roy. 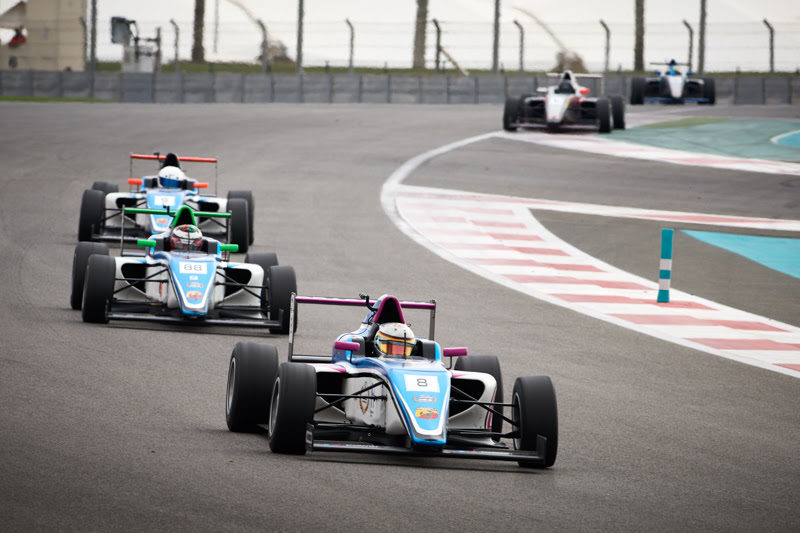 In Race 3, Nannini and Alhabsi again started on the front row; their starting positions being determined by their second fastest lap times in qualifying. However, Dürksen jumped the start and was given another 10-second post-race penalty despite being first car across the line by race’s end. Nannini didn’t get the best of starts, falling back to fifth at one stage on the opening lap, before coming together with teammate Alhabsi on lap two, causing a Safety Car period. Nannini was eventually able to rejoin the back of the field under the yellow caution, while Alhabsi’s car was moved off-track, unable to restart the race. Roy finished 6.7 seconds in front of Nannini, who was able to pass six drivers on-track during the remainder of the race to claim second place, and Dürksen slotted into third after his penalty was applied. Rafa Villanueva (#26) finished a credible fourth place, his best result of the season.

For the final reverse grid race of the day, Ghanem and Nico Göhler (#22) started on row one, with the two race winners Nannini and Roy starting fourth and fifth respectively. Dürksen spun on lap one and fell to the back of the field, while a few laps later his teammate Göhler was hit by Roy who was given a 10-second penalty post-race. Nannini made it to the front by lap two and by race’s end finished with a 12-second margin over Alhabsi in second place, who held a commanding race to move up to the podium after starting rear-of-grid. Andrade rounded out the podium again, his third this weekend.

Matteo Nannini, Xcel Motorsport (#15) – Italy. Fastest Qualifier and Winner of Races 1 & 4. Current championship Leader.
“This was a very fantastic weekend. We started with a victory in race one and a podium in race two. In race three we had an accident between me and my teammate but fortunately I could keep going and finished second. Then in the last race I started fourth and raced hard to get to the lead and made a big gap so I could manage the tyres. The most important thing I learn is the overtaking now, because before I didn’t have a lot of confidence but I think race after race I am a better driver. I got good points for the championship this weekend and we want to finish on top next week. If we can do that it’s going to be a good start for the next championship I’m going to do in Europe.”

Lucas Roy, Dragon Racing (#8) – Monaco. Winner of Races 2 & 3. Currently 3rd in the championship.
“I just felt really good from the get-go, my starts were okay, but I was just really aggressive to overtake and determined to get another win after we won already in Dubai at round one. I had quite a few battles with my teammates which was nice, I might be faster than them but they have a lot more racing experience because I didn’t do any karting before I started in F4. Coming to Yas Marina Circuit alone is a fantastic feeling but to now win here is even better. Moving up to third in the championship is also a bonus and we’ll just keep pushing more at the final round next week to make sure we can win there again.”

NEXT EVENT
Round 5 of the 2019 F4UAE Championship – the grand finale – will return to the Dubai Autodrome from February 28-March 2. Dragon Racing will welcome karting racer Roman Stanek as their fourth driver, while former F4UAE racer Niklas Krütten returns to Mücke Motorsport in preparation of his upcoming F4 seasons in Europe.