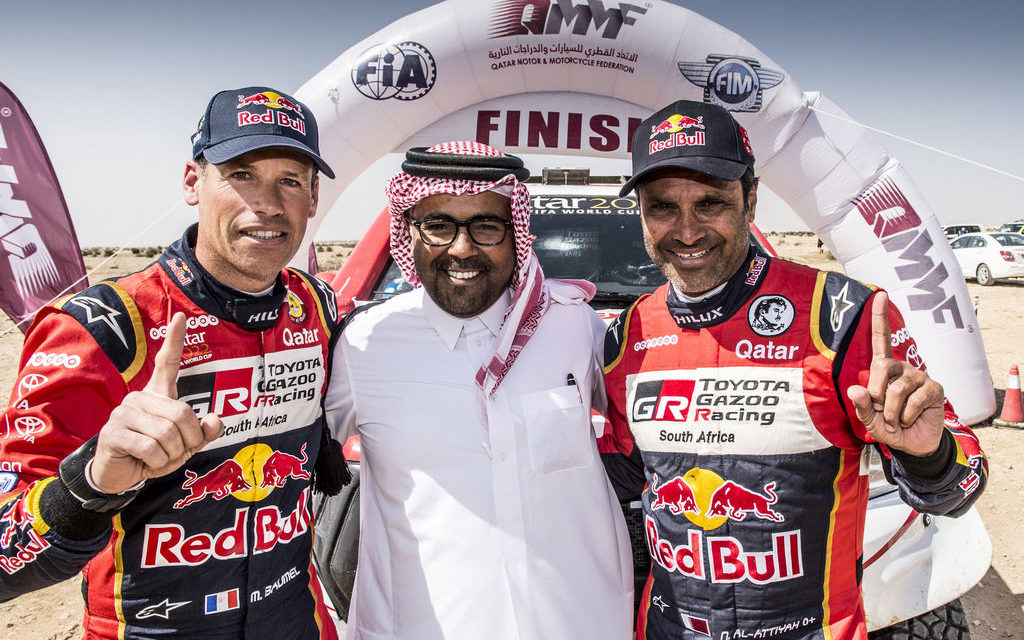 Tuesday, February 26th, 2019 –Losail (Qatar): Nasser Saleh Al-Attiyah followed up his stunning victory at the Dakar Rally with a start-to-finish success in the Manateq Qatar Cross-Country Rally, the opening round of the FIA World Cup for Cross-Country Rallies, on Tuesday.

The Qatari and French co-driver Matthieu Baumel guided their Toyota Hilux to a winning margin of 11min 10sec to confirm a sixth victory for the driver in the eight years that the event has been a round of the FIA series. Al-Attiyah also won the candidate event when it was called the Qatar International Baja in 2011. This win was Baumel’s fifth.

“I am quite happy to win my rally in Qatar seven times. This is nice for the championship. I took it easy this morning with no risks. We did a good gap over the last four days and we just needed to finish without any problems.” 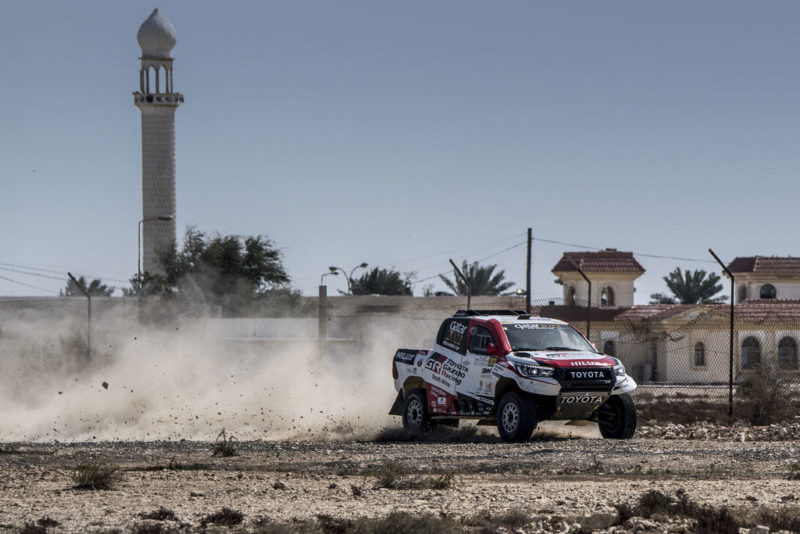 Baumel added: “It’s never easy in Qatar, but one of the big differences is Nasser’s experience and knowledge here. He knows very quickly to choose the direction. It’s a very satisfying win, especially for Nasser, Qatar and the start of our championship.”

Despite pressure on some stages from Yazeed Al-Rajhi and defending champion Jakub Przygonski, Al-Attiyah was able to manage his pace and preserve the Toyota. Al-Rajhi and Dirk von Zitzewitz began the day 12min 33sec behind their Toyota team-mates in second place and fought off a fierce last stage challenge from Przygonski to seal second place on the podium by just 46 seconds, despite one puncture. 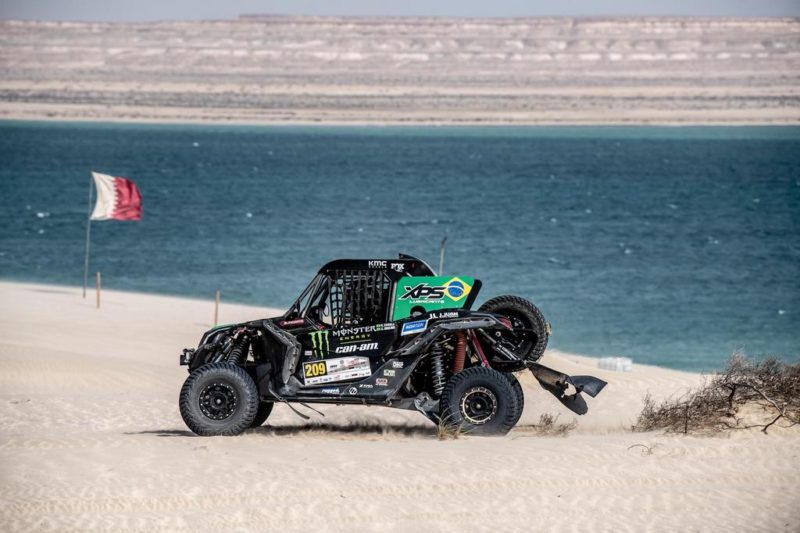 Gottschalk said: “Today was a big fight. In fact, the whole rally was a lot of good fights. It was not easy but I enjoyed working with Kuba and we look forward to the next rally. We managed to catch Yazeed. Then he got lost a bit and we overtake him and he pass us back again. Then he had a puncture, so it was a nice fight. No-one was giving up.”

Vladimir Vasilyev and Konstantin Zhiltsov fought a lone battle in their BMW X3 CC and were rewarded with fourth place for a solid drive with few risks and only minor problems en route. “I am not happy with this result,” said Vasilyev, who finished second in 2018. “No problems, no punctures today. It was good.” 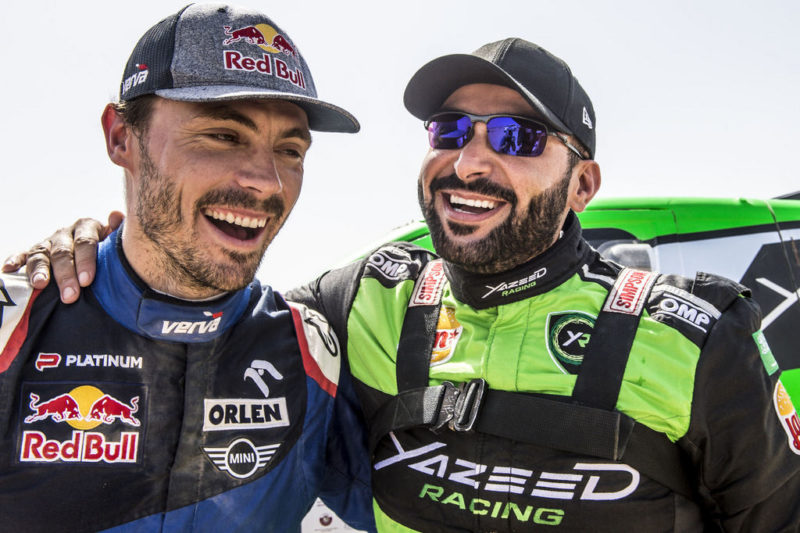 Dutchman Bernhard Ten Brinke and Belgian co-driver Tom Colsoul recovered strongly from time lost earlier in the rally to finish sixth overall in the third Overdrive Toyota. “We may not complain about this result after day two and day three. This is not the result that we hoped for but, okay, six is okay and two times we were P2 on the stages. We are happy for now.”

Monster Energy Can-Am driver Reinaldo Varela began the final day with a massive T3 lead of 2hrs 36min 10sec over Russian Fedor Vorobeyev and the Brazilian cruised through the final kilometres to record the win and finish seventh in the overall standings. Vorobeyev reduced the eventual winning margin to 2hrs 33min 12sec on his way to a fine eighth in his South Racing Can-Am.

Italian female driver Camelia Liparoti was the last competitor to finish the event without massive time penalties and the plucky Yamaha driver and her French co-driver Max Delfino were rewarded with a stunning ninth place and third in T3.

A third successive T3 stage win fell to Qatar’s Adel Abdulla and navigator Marc Serra, but water in the fuel had cost them any chance of fighting for the win earlier in the week.

Italy’s Eugenio Amos and French co-driver Sebastien Delaunay missed one day because of the driver feeling unwell, but the Ford 2WD Buggy crew bounced back to round off the top 10.

Mohammed Al-Meer reached the finish to claim T2 honours in his Nissan Patrol and Ibrahim Al-Muhanna persevered at the rear of the field with his Mercedes Unimog to claim T4 honours on a truck’s first participation in the event.

The final stage of 263.80km utilised three passage controls at 14.03km, 139.13km and 203.68km. It started east of Dukhan and headed in a northerly direction up the western Qatar coast to a PC at Musaykah before crossing the northern deserts to a final checkpoint north of Al-Ghariyah, on the north-eastern coast, before passing down the eastern extremities of the country to finish north of Sidriyat Al-Kheesah.

National competitors ran as far as PC2 and this stage counted as the sixth and final round of the Qatar Manateq National Baja Championship.

Adel Abdulla and Spanish co-driver Marc Serra claimed outright victory in a Can-Am Maverick X3 with a time of 1hr 35min 26sec. Mohammed Al-Attiyah and Sergio Lafuente were second and Ahmed Al-Kuwari and Manuel Lecchese rounded off the top three.

Numerous additional time penalties were handed to competitors on Monday evening for missing different sections of the route. The top nine remained unchanged, but the likes of Mohammed Al-Meer and Khalid Al-Mohannadi were declared OTL on leg four and additional penalties were also imposed on Ibrahim Al-Muhanna and Mohammed Al-Attiyah.

Only nine of the original 22 FIA entrants were running without at least 100 hours of penalties. Mohammed Al-Harqan retired from the T2 battle at the end of leg four

Should have been given longer to prove but hay ho that’s the sport!

The Best that I have seen!!!

Hope you can become top contender👍🏻👍🏻