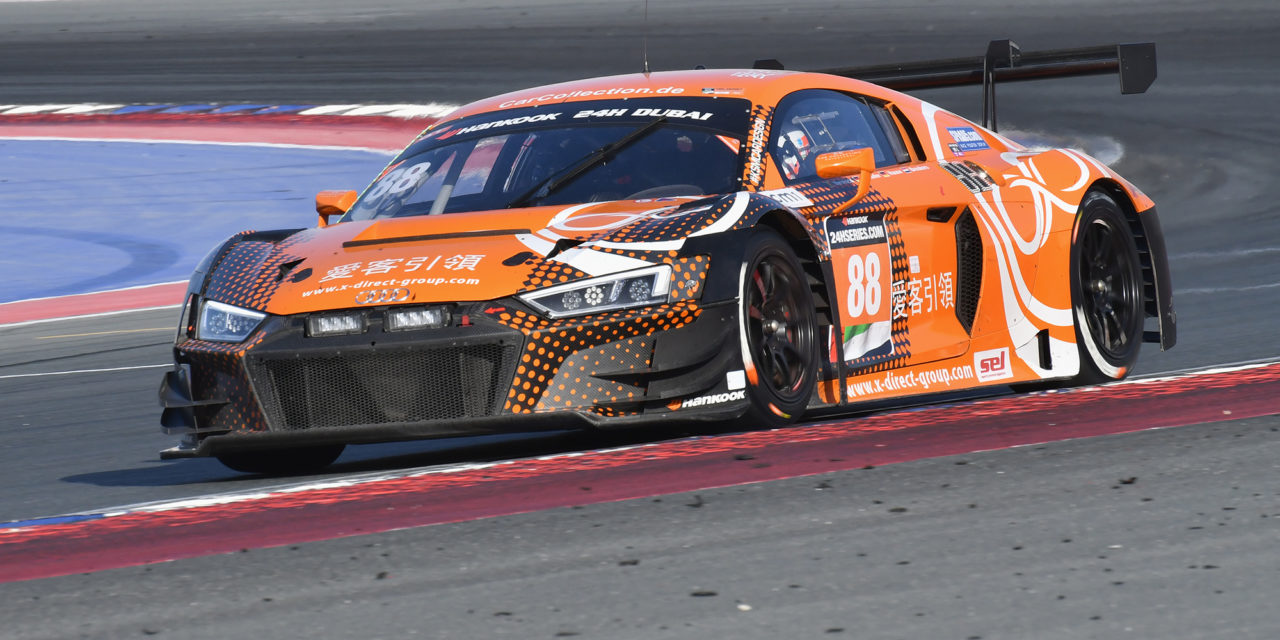 Sheikh Juma Bin Maktoum Al Maktoum had the honour of waving the chequered flag to signal the end of 24-hours of racing and immediately afterwards the winning drivers were hoisted unto camels in front of a celebrating crowd for the famous Dubai camel procession in the pit lane. 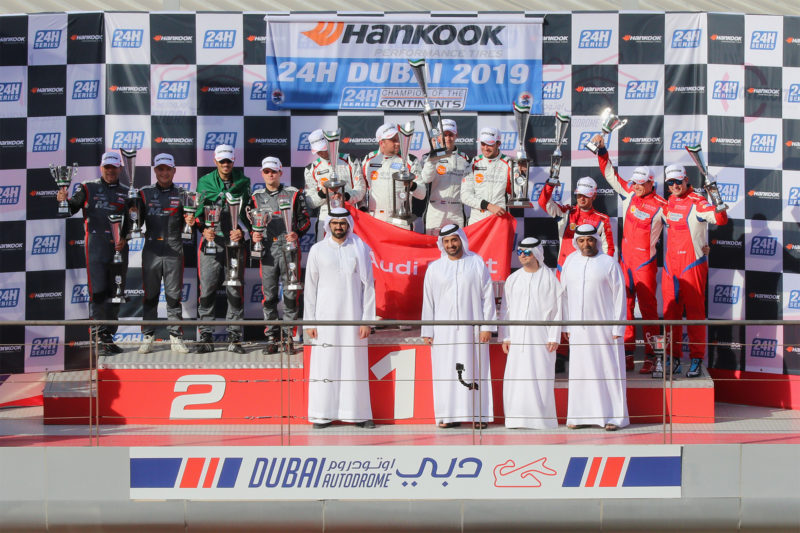 The VIP guests were met by Dubai Autodrome General Manager Faisal Al Sahlawi and then they enjoyed the traditional grid walk which proceeds the main endurance race.

Sheikh Juma Bin Maktoum Al Maktoum and HE Mohammed Khalfan Al Rumaithi conducted the honorary start of the race, setting the massive grid of cars into action with the waving of UAE flags.

In the openings laps the #88 Audi R8 LMS of Car Collection Motorsport immediately went on the attack to chase down the polesitter, the #63 Lamborghini Huracan GT3 of GRT Grasser Racing Team.

By late evening on Friday two Audi R8 LMS race cars powered to the front of the pack and locked down the frontrunner positions while behind them chaos reigned.

Solid driving stints from Dimitri Parhofer, Christopher Haase, Frédéric Vervisch and Rik Breukers of Car Collection Motorsport (#88) pushed the German team into the lead and in control of the race throughout the night and into morning.

Mohammed Saud Fahad Al Saud, Michael Vergers, Christopher Mies and Dries Vanthoor of MS7 by WRT in the other Audi R8 LMS (#7) kept up the chase but ultimately the Belgium team could not keep pace with the leaders.

Any hope of an Italian car finally cracking German dominance in the 24H Dubai was dashed early on when the GRT Grasser Racing Team Lamborghini Huracán (#63) fell from grace, dropping from pole down to 13th place in the opening hours with mechanical issues. The team did well to recover the car in the pits and fight back to finish fourth overall.

Another Italian make, the Ferrari 488 GT3 of Bohemia Energy Racing (#11), picked up the challenge where the Lamborghini left off, climbing as high as P2 during the race. It couldn’t break the Teutonic stranglehold either but the Ferrari did make it to the winner’s podium with a solid third-place finish.

The most decorated team in 24H Dubai history, Black Falcon, will most likely want to forget their outing this year. Despite a promising outlook early on with the #3 Mercedes AMG GT3, lead by Khaled Al Qubaisi, Luca Stolz, Jeroen Bleekemolen and Ben Keating, challenging for the front, a retirement due to suspension problems mid-race took one squad out of the mix while the other Black Falcon Mercedes (#2) could only manage P15 by the end of the contest.

After fourteen years German cars remain dominant in the event, as no other vehicle make of another country has ever claimed victory in the history of the 24H Dubai.

“Dubai is where it all started for us with CREVENTIC’s inaugural race back in 2006,” said Gerrie Willems on behalf of the Dutch agency, organisers and promoters of the 24H SERIES powered by Hankook in co-operation with the Dutch National Racing Team.

“It makes us proud and grateful to see how the event has developed over the years thanks to the continuing support of Dubai Autodrome and Hankook as our title sponsor, combined with the loyalty of our teams and drivers. It is the flagship of our series and ranks as one of the major international endurance race events.”

In total, the race had 19 code 60 neutralisations with 38 laps completed under code 60 by the leader.

Action in the 24H GT SERIES and 24H TCE SERIES, both powered by Hankook, continues with the Hankook 12H MUGELLO (29-30 March), the start of the European Championship season. However, CREVENTIC will be organising its next event in the Middle East in a fortnight already with the opening round of the 24H SERIES Middle East Championship, the Hankook 6H DUBAI, and the season opener of the TCE MIDDLE EAST Series, both at Dubai Autodrome on 25-26 January. Further information can be found at  www.24hseries.com.