Dakar: Dakar kicks off proceedings as riders drivers and crews go through scrutineering 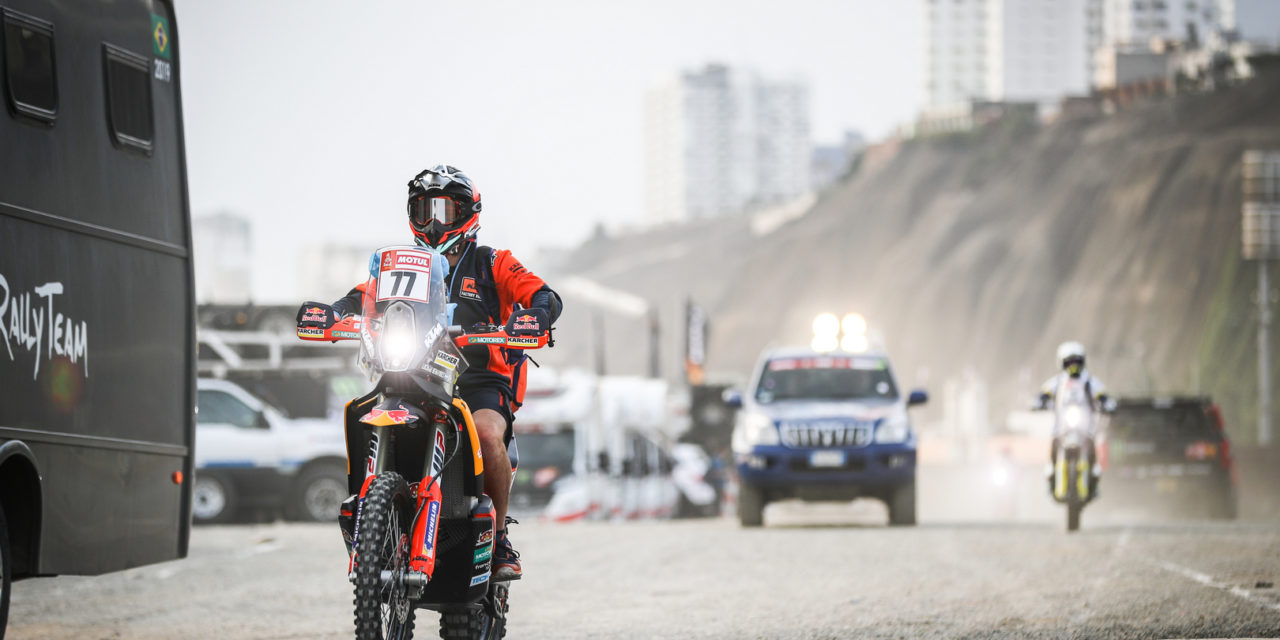 –  The 41st edition of the Dakar kicked off proceedings as riders, drivers and crews submitted themselves to the ritual of administrative and technical scrutineering, which are taking place over a three-day period in Lima, Peru’s capital.

–  The Peruvian competitors enjoyed pride of place for this opening session in front of the microphones and cameras, displaying a variety of ambitions but the same pride for the ten days of racing that they are readying to face. From debutant Gianna Velarde to the very competitive Nicolás Fuchs, not forgetting the race’s loyal crew of Fernando Ferrand father and son, they will be patriotically flying their country’s flag!

During the first day of technical and administrative scrutineering, featuring a multitude of outsiders for the various titles up for grabs. Gerard de Rooy came to Las Palmas Air Base in the early morning, eager to begin his comeback after a year on the sidelines, along with his teammate Fernando Villagra. The expectations surrounding the Argentinian as a rival to the Kamaz hegemony are as high as the hype around his captain.

The Honda riders are also looking to cause an upset. The Japanese maker is banking on 2018 runner-up Kevin Benavides and Joan Barreda to end the KTM domination, as well as Paulo Gonçalves, whose participation was in doubt for a while after he fell a few weeks ago. Pundits will keep a close eye on Robby Gordon, who is racing in the Dakar for the first time since 2016 and is determined to take the fight to Mini and Toyota. The stars of the S×S category went through scrutineering, including defending champion Reinaldo Varela and a host of newcomers with the talent to turn the race on its head, such as American Casey Currie, Spain’s Gerard Farrés and Chile’s “Chaleco” López.

An important year is beginning for Peru in sporting terms. Next summer, Lima will host the Pan-American Games, then in October the country will be organising the Under-17 football world cup. However, at present another event of international scale has come to town, with the 41st edition of the Dakar, for which administrative and technical scrutineering began at the Las Palmas air base in the south east of Lima.

Whilst the Peruvians will, in several months’ time be counting on their athletes and young footballers to light up the stadiums, for now their focus is on their 36 representatives who will be getting to grips with the dunes behind the wheels or handlebars of 21 vehicles in total. The Peruvian contingent’s ambitions and resources vary significantly from one competitor to another.

The most loyal to the race, the father and son team of Fernando Ferrand senior and junior, will be taking part for the 9th time having never failed to reach the finish, and with the sole objective of “setting off from Lima and returning home to Lima,” much to Fernando senior’s delight. The family duo will in its own way be serving as a model for the young Gianna Velarde, the most popular of the Peruvian riders on the social networks, who will be attempting to become the first woman biker from the country to complete the challenge:

“Every day, I visualise myself finishing the Dakar, because I know that the mind is very powerful. The worst enemy is in my head, that’s very clear to me. I know that the woman who is leaving is going to be very different from the woman who comes back,” admitted the young lady, whose strong will helped her to overcome cancer at the age of 15 years old, as she made her way throw the aisles of scrutineering.

A completely different goal will be in the sights of Nicolás Fuchs, the country’s leading standard-bearer, as he attempts to put Peru as high as possible in the final general standings in two weeks’ time. The former WRC driver came close to the top 10 during his first participation (finishing in 12th place), before being a member of this exclusive club until two days before the finish last year, but is visibly determined to battle with the elite over the next two weeks, thanks to the famous concept of… high-speed caution! “The best way of finishing in the top 10 is to do my utmost to ensure I come back to Lima,”he wisely observed. “I accept the pressure that I have to deal with, because it’s a positive thing that motivates me”.

While the first day of the grand scrutineering parade chiefly witnessed the passage of riders, drivers and crews from the ranks of South American amateurs without any discernible ambitions for the general standings, the Side by Side (SxS) category saw one of its major pretenders, Ignacio Casale, explain his choice to change vehicle after winning twice on a quad: “It’s the category of the future on the Dakar,” the Chilean confidently asserted. His departure from the quad category should present opportunities for the Argentinean favourites in the discipline, namely Nicolás Cavigliasso and Jeremías González, respectively 2nd and 3rd in January 2018 at the finish in Córdoba. They have also now left their vehicles in the secure enclosure and are champing at the bit to tackle the first dunes on the first special programmed for 7th January.