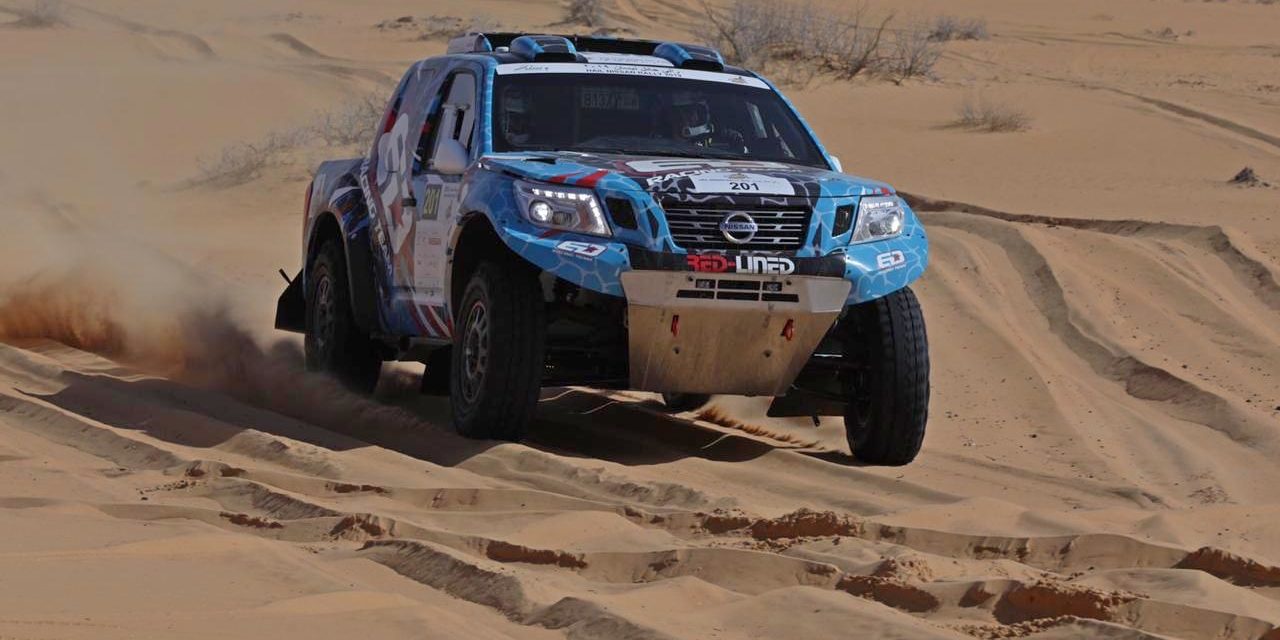 The Nissan Navara driver and his Emirati navigator Ali Hassan Obaid benefited from the fast nature of the final 170.02km selective section through the An Nafud desert to record a time of 1hr 29min 49sec and secure outright victory over Saudi Arabian rivals Ahmed Al-Suhail and Rasheed Al-Shammeri by the margin of 2min 22sec.

Al-Dossari said: “It was a little bit difficult. We had a problem with the brakes on Monday and we lost a lot of time. The time we gained at the start of that stage, we lost at the end, so we pushed hard today to the maximum. We had a puncture but still managed to win the stage and the rally by a good margin.”

The Saudi Arabian Nissan Patrol pairing of Faris Al-Moshana and Saud Al-Tamimi rounded off the top three and Salman Al-Mashan was the leading non-Nissan driver in fourth overall.

Former leader Khalid Al-Feraihi and his French navigator Sébastien Delaunay recovered strongly to finish seventh, but overnight leader Khalid Al-Jafla could not match the all-terrain vehicles for speed over the closing high-speed kilometres and the Emirati brought his T3-winning Can-Am to the finish in ninth place after a flat tyre cost him further time.

Al-Jafla said: “We started the day as first car and then, after 66km, we got a puncture. The track was so fast. The top speed of my car is maybe 140 and the other cars pass me at 180. I lost the lead and then took it easy to make sure that we made it to the finish.”

Al-Heraiz’s UAE navigator Ali Mirza said: “We had technical problems since we started the last stage until 70km from the finish. We had electrical issues and we stopped three or four times. We lost time. The car would not start. At least Essa won the rally for the team. We were pushing a lot today, but we broke down.”

Saudi Arabia’s Muneef Al-Salmani lost his chance of winning the T2 title after retiring on the third stage and Meshaal Al-Saadi and his Omani co-driver Abdulhalim Al-Busaidi duly confirmed victory in the T2 category for series production cross-country vehicles by the margin of 13min 30sec from Khalaf and Joaan Al-Juaan.

The 2014 event winner Ibrahim Al-Muhanna guided his Mercedes truck to the finish and the win in T4.

The UAE’s Sultan Al-Balooshi secured a second successive victory in the motorcycle category on his KTM by the comfortable margin of 1hr 24min 10sec. Ali Al-Balooshi was second and Abdullah bin Dakhan rounded off the podium places.

Talal Al-Thukair won the NUTV category in his Can-Am from Khalil Al-Tawijri, but fuel leak issues cost Majed Ibrahim Al-Tawijri the chance of a decent finish.