Dubai: Wins for Shalunov and Hjerppe in Radical Middle East Cup rounds 5 and 6 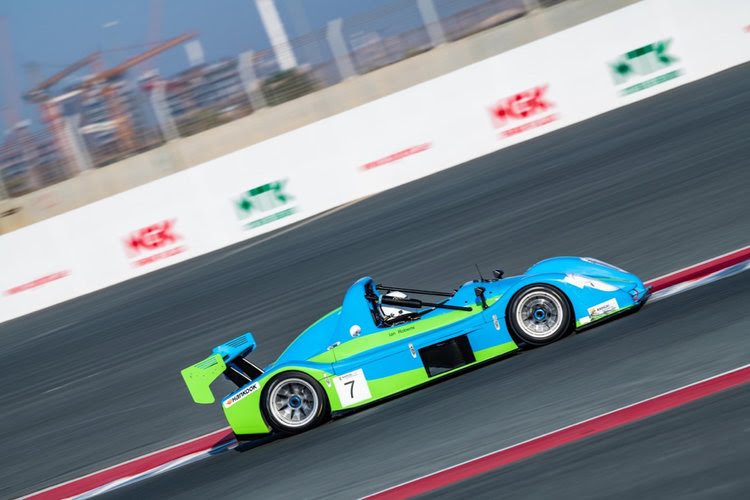 Gulf Radical Cup – Dubai Autodrome
Rounds 5 & 6
Dec 7 th – This weekend saw 11 amateur racing drivers competing in Rounds 5 & 6 of the Gulf Radical Cup which was being held on the fabulous 4.33 kms International Circuit in Dubai. There are no cash prizes; just the glory and pride that comes from winning a trophy. The circuit layout being used has 10 challenging corners, many of which demand major commitment as they produce more than 2G in their high downforce Radical SR3 production sports prototypes. Paddle shift, more than 10,000 rpm, unparalleled amounts of grip and stopping power – a very exciting experience. Nothing compares!
Qualifying
As a two driver race there are two qualifying sessions, the first of which sees Team GulfSport’s Ian Roberts in the #7 car taking his first pole position in the series with a lap of 1:41.151 after a second GulfSport car driven by Russian driver Sergey Shalunov had his fastest time disallowed for exceeding track limits.
In the second qualifying session Shalunov was not to be outdone, and after waiting in the pits, rolls out with just three minutes to go after seeing his team-mate Roberts post the fastest lap time. Shalunov then put in a blistering 1:40.176 to take pole!
Round 5
So all eyes were on Roberts for Round 5 as the start lights went out with Shalunov in P2 and series leader Jane Hjerppe (Dream Racing) in the #17 uncharacteristically back in P3. After the mandatory 45-second pit stop, where time penalties are added based on the result of the previous race we find Shalunov and Roberts fighting it out for the lead with Hjerppe still in 3rd being harassed by the hard charging James Edmeades of D5 Racing in the #4 who sets the fastest lap of the race in the process. Roberts had a spin passing back markers on the penultimate lap but manages to stay ahead of Hjerppe to finish second behind Shalunov.
Round 6
Shalunov was on pole but very much aware that he would have a 15 second time penalty on his pit stop as a result of his win in the previous race, some 10 seconds more than Hjerppe. At the start it was Roberts who took the initial lead but both the front row starters were outdragged by fast starting Hjerppe whose actions caused the officials to take a close look. However, they decided it was ok and no penalty was given. On lap 3 Roberts retired with a broken drive shaft leaving Hjerppe in the lead very closely followed by Shalunov and James Edmeades in the #4, all nose to tail.
First to take their pitstop was the Sam North / Hugh Smith combo in the #16 followed a lap later by South African racer Sean Simpson in the #26. Two laps later and the freight train of Shalunov, Hjerppe and James Edmeades, who again set fastest lap, came storming in together.  Based on their time penalties, Hjerppe got back on track first, followed shortly by Edmeades’ partner Jeff Curtis – but previous race winner Shalunov was retired by his team in the pit stop with a ruptured oil line after it having being pointed out by the D5 driver on exiting his car.
The second half of the race saw an extremely close battle between Hjerppe and Simpson who were never less than a second apart on track until on lap 22 Simpson finally took the lead – only to be penalised with a Stop/Go penalty for speeding in the pit lane! He clearly was enjoying his race, the first time he had led a Radical race and  decided he would continue despite receiving a 20s penalty for his misdemeanour which, given that Curtis was now some 30 seconds back, still gave him second place.
Amir Feyzulin (AUH) finished a strong 5th ahead of the Sam North and Hugh Smith due who had an enjoyable event finishing both races ahead of Fran Cush and Neil Clark.
Rounds 7 & 8 will take place at the Yas Marina Circuit on the 18th January.