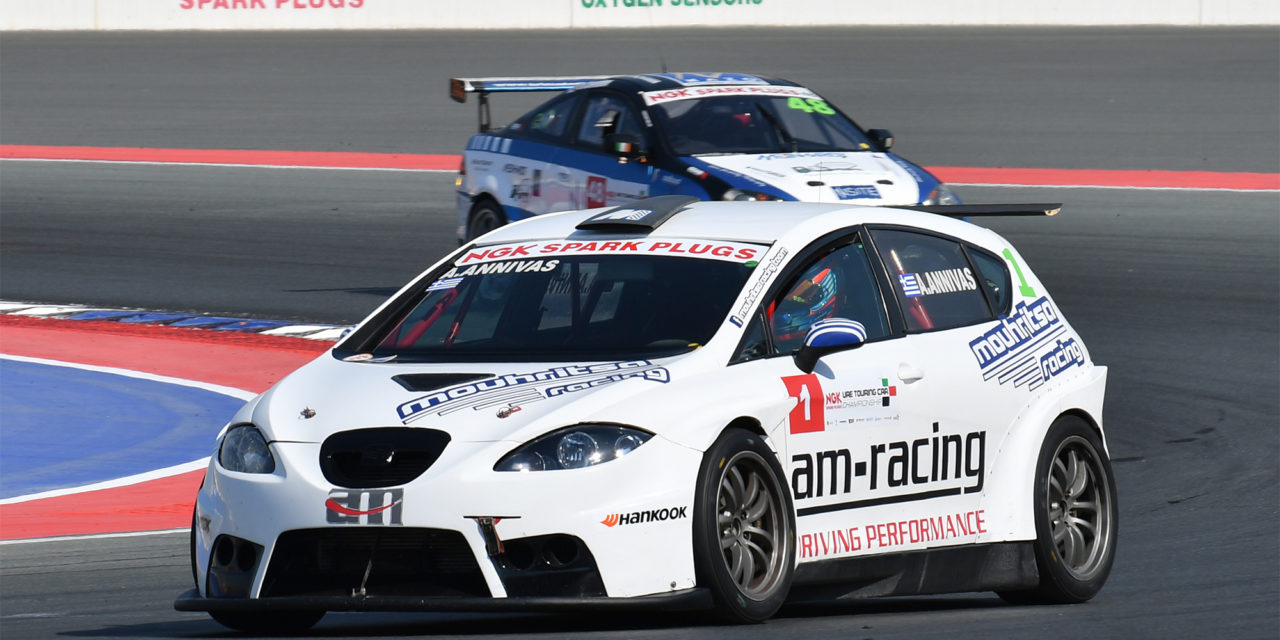 The morning was good for Costas Papantonis driving the formidable TCR Cupra for Gulf Petrochem/Mouhritsa Racing. The Greek racer topped the qualifying session with a best lap time of 1:47.525, which was well clear of any other machinery on the twelve-car grid.

His teammate Alexandros Annivas put in a best lap time of 1:55.448 at the wheel of his Seat Leon Super Copa, which was more consistent with the rest of the touring car pack. The ZRT Motorsport Honda Integra of Ricky Coomber was only 0.174 second off the pace of Annivas, with Willie Morrison next up with a best lap time 1:57.061, leading a squadron of Renault Clio Cups, all seven of them.

Papantonis got off the line well for Race One and looked to repeat his winning exploits from the previous round, however, a brake problem developed in the middle of the race and he was forced to retire the mighty Cupra. That opened the contest up for Annivas, Coomber and Morrison to challenge for the win.

Alexandros Annivas seized the gifted opportunity and raced well clear of the pack, rolling in to take the chequered flag with over a minute to spare over Ricky Coomber. Willie Morrison claimed third overall, 22.578 seconds ahead of his Clio Cup rival Peter England.

By evening the situation got worse for Papantonis and he was unable to compete in Race Two. Again, the other Petrochem/Mouhritsa Racing entrant was there to pick up the slack.

A reverse grid for the second race meant that Annivas had to start from the back row, but this did little to deter the Greek driver and his peppy Seat. He quickly sliced through the field and took control of the race.

Coomber was unable to keep up with the leader and Morrison’s Clio was right on the back bumper of the Integra. The remaining Clios battled it out, with England best of the rest.

Alexandros Annivas sealed his second overall victory on the day, which wrapped up a pair of Class One wins over the Czech drivers of Petr Kacirek and Marcel Kusin. After three rounds, Annivas remains the championship leader (150 points total).

Ricky Coomber had to settle for second-place finishes overall but the British driver added a pair of Class Two victories for ZRT Motorsport and their season aspirations (100 points total). Ali Kamyab maintains second-place (50 points total) but has plenty of ground to cover to have any optimism of challenging the class.

Willie Morrison gave Coomber a serious challenge and the Scottish driver was a dominant force in the Renault Clio Cup Class powered by Renault Middle East. He topped the magnificent seven with two class wins and he remains at the top of the Clio Cup season leaderboard (150 points total).

Peter England has yet to find a way past Morrison, but he remains in the hunt and currently second-place in the Clio Cup championship (108 points total), just ahead of Rahil Taneja of AUH Motorsports (81 points total).

Markus Thomas of GP Extreme saw plenty of action skirmishing with the Clios of Colin Boyle and Taneja. He was rewarded with a pair of third-place finishes in class and, even better, the distinction of the Airlink International Driver of the Day, which included a AED 1,000 prize.