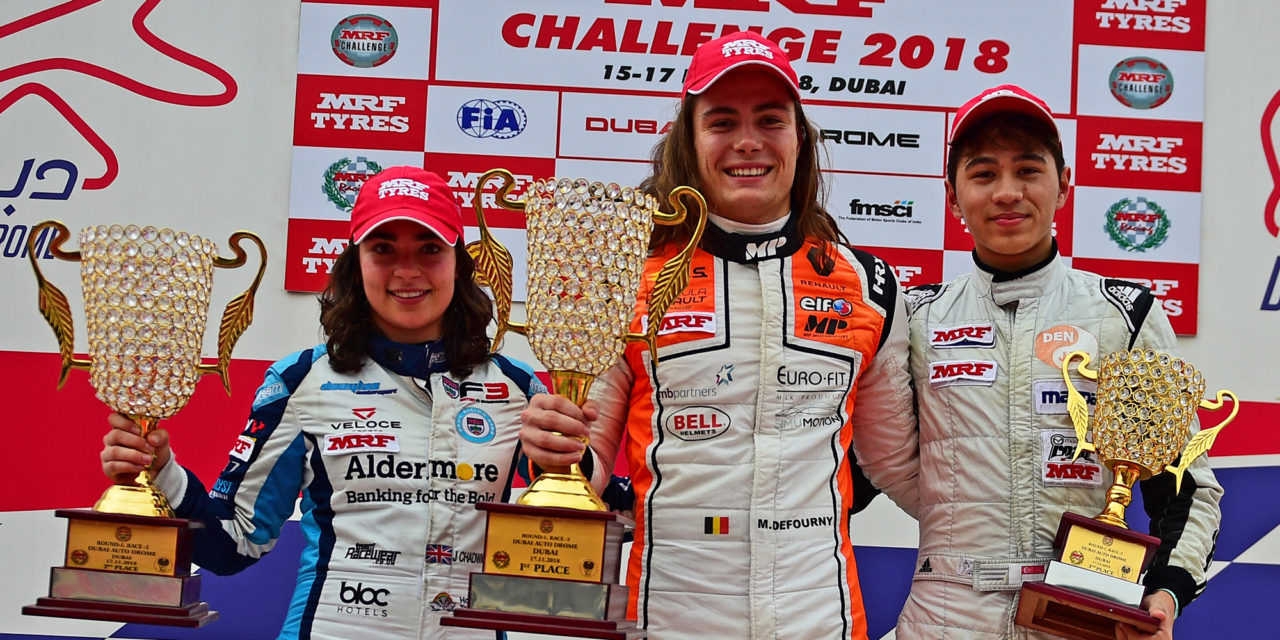 For Defourny, the Round-1 of the MRF Challenge proved memorable as he won Race 1 and 5 apart from podium positions in the other three races. Defourny finished the Round 1 with 106 points, ahead of Great Britain’s Jamie Chadwick (78) and Singapore’s Danial Frost (70), winner of Race 2 yesterday.

The MRF Challenge heads to Bahrain (Dec 6-8) for the next round before moving to Chennai (Feb 8-10) for the championship finale.

Defourny could have done even better, but he messed up his pole-position start in Race-3 where he lost track position by Turn-1 itself in the very first lap, but recovered to finish third. “I think, I could have done better and won a couple of more races. I made a few mistakes, but more important was that I picked up points at the start of the championship. My win in Race 5 was far more satisfying than that in Race 1. I won more comfortably and on tyres that I had used in the previous four races,” said Defourny.

In the day’s first race, Andreas Estner, was off to a great start, moving from fourth to first as the pack dived into Turn-1, and, thereafter, literally won as he pleased as he left rest of the field, including pole-sitter Max Defourny, scrabbling for positions. While Estner disappeared into the distance, Britisher Jamie Chadwick slotted herself into P2 which she defended gamely against close attention from Defourny with the Belgian first dropping to fourth before tucking himself behind the British girl for the rest of the race.

Race-4 was all about Pasma who made capital of his reverse grid pole-position start to open up a sizeable lead. Behind him, Defourny set a scorching pace to move from fourth to second and bore down on Pasma. In a tense battle, the Finn defended well to win while Defourny picked up his fourth podium with a second-paced finish ahead of fellow-Belgian Michelangelo Amendola.

“The pole position gave me a lot of confidence and I managed to open up a good lead. In the last couple of laps, Max (Defourny) was close behind me, but I managed to survive,” said Pasma.

In the fifth and final race of Round 1, it was Defourny all the way after starting from pole position and with each of the 10 laps, he increased the lead for his second win of the week by nearly 10 seconds. Meanwhile, Chadwick, the only female competitor on the grid, came through a tough midfield battle to finish a deserving second ahead of Singapore’s Danial Frost, winner of Race 1 yesterday.

India’s Chetan Korada, though finishing way down the grid in all the five races, took some positives from the first round. “I am gradually getting used to the car and this is reflected in my ever-improving timings. I hope to have a better outing in Bahrain next month and hopefully, by the time we get to Chennai in February, I should be more competitive and fighting for mid-grid positions,” said the 32-year old Chennai-based driver competing with a prosthesis leg.

Danial Frost, Max Defourny share honours on Day One in MRF Challenge
Dubai, 16 November 2018: Danial Frost from Singapore and Belgian Max Defourny scored a race and a podium apiece to open their accounts in the first round of MRF Challenge at the Dubai Autodrome, here on Friday. Three more races are scheduled for tomorrow.
Frost, 17, in his second season in the championship, thus notched his maiden win by topping Race-2 after having finished third in Race-1 that Defourny, 20, won from pole position.
In Race-1, Frost made five places to come in third and in the next outing, climbed from fourth on the reverse grid to win. In contrast, Defourny dominated Race-1 with a lights-to-flag victory and in the next race, sliced his way through from sixth on the reverse grid to finish third behind pole-sitter Czech Republic’s Petr Ptacek who did well to hold off the Belgian over the last couple of laps.
“I had a good start and made positions in the very first lap before taking the lead. Thereafter, I consolidated my track position and it was quite comfortable in the end,” said Frost.
Earlier, Defourny put his pole position start to best use in Race-1 and was never seriously challenged even as he nursed his early lead though eschewing risk. Behind him, Jamie Chadwick, 20, who started second, slipped a bit, losing a couple of track positions, but recovered to regain her second spot while Frost drove well to finish third from eighth on the grid.
India’s Chetan Korada, making his debut in the championship, was placed 10th and 12thin the two races. He started Race-1 from the pitlane following an engine change, but said he was pleased to improve his lap times while getting used to the car.
After Race-1, Defourny said: “The race wasn’t too bad. Missed the fastest lap as I was trying to be a bit cautious on the tyres because it was the first race of the season. Was saving my tyres in the beginning and was expecting more track improvement as the race progressed. I opened a comfortable gap and did not want to make any mistakes, though I missed the fastest lap in the last two laps, wanting to save the tyres.”
Earlier, the qualifying session in the morning gradually developed into a two-way battle between Defourny and Chadwick who was provisionally on pole with just a few minutes left on the clock with a 01:57.177. The 20-year old Belgian’s response was a 01:56.819 which eventually ensured him the pole position. Chadwick, also 20, then replied with her best lap of the session, 01:56.937, but had to be content with the second spot on the grid.
“It was my first time out here and it was ok. We managed to get pole for Race 1 and Race 3. So we are positive. We had some issues with the gearbox leading to loss of speed, but we managed to sort it out. I already have two points for pole position and we hope to take as many points as possible from this round,” said Defourny.
The results:
Race-1 (10 laps): 1. Max Defourny (Belgium); 2. Jamie Chadwick (GBR); 3. Danial Frost (Singapore). Race-2 (10 laps): 1. Frost; 2. Petr Ptacek (Czech Republic); 3. Defourny.
Qualifying (30 minutes): 1. Max Defourny (Belgium) (01:56.819); 2. Jamie Chadwick (UK) (01:56.937); 3. Andreas Estner (Germany) (01:57.502); 4. Dylan Young (Australia) (01:57.730).