MotoGP: Lorenzo vs Marquez: a stunning showdown as Lorenzo wins in Spielberg 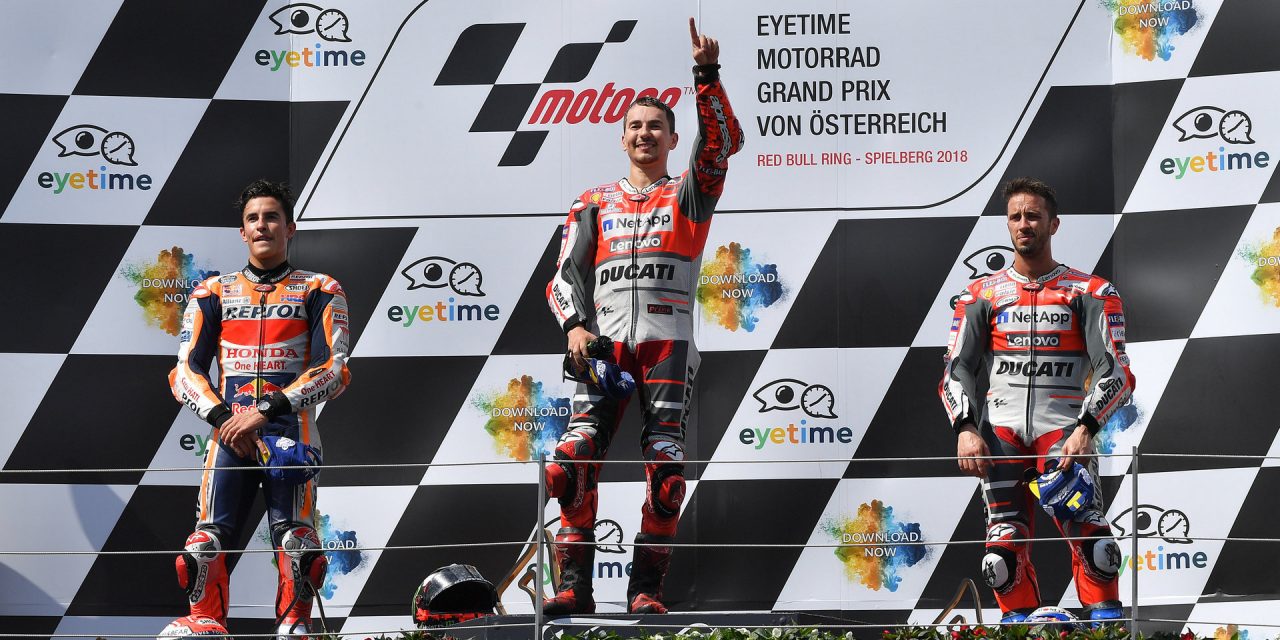 A classic rivalry and another classic race, this round goes to the number 99…just
Jorge Lorenzo (Ducati Team) and Marc Marquez (Repsol Honda Team) put on a show to remember at the Red Bull Ring in the eyetime Motorrad Grand Prix von Österreich, with the two dueling down to the wire in an instant classic and Lorenzo coming out on top for his third win of the season. Teammates in 2019, the five years in which Lorenzo and Marquez have shared the track have produced some legendary different battles at different circuits, but the number 93’s search for a win at Spielberg will have to continue. The man who beat him to the honour last season, Andrea Dovizioso (Ducati Team), completed the podium in third this time around.It was Marquez who had the initial advantage as he bolted away into the distance over the first laps, putting the hammer down early and leaving the Ducati duo of Lorenzo and Dovizioso trailing him by half a second, a second, then seven tenths as the gap was a constant concertina but a sizeable one nonetheless. In clear air the number 93’s tactics seemed immediately clear, and the bigger focus over the first laps was on the two Ducati men locked together behind him – almost close enough to look like one bike at a passing glance.

Dovizioso looked threatening and feinted a number of times but the Italian didn’t make a move. With the gap at the front staying constant and Marquez no longer gaining ground, the tide then began to turn as Lorenzo slowly reeled him in. By 11 laps to go the Ducatis were right back on the tail of the Honda but Lorenzo just ran it wide at Turn 3. Using the grunt of the Borgo Panigale machine, however, the number 99 recovered quickly to fire himself back into second and the lead trio remained in line, nothing between them… before Lorenzo decided to make his move. Jorge Lorenzo (Ducati Team #99) – 1st
“It was an incredible race, maybe one of the best of my career, quite simply spectacular! Winning with Ducati on this circuit, where I had never won before, after a close quarters battle with Marquez, has a really special taste. Before the race I had thought about which strategy to use, and I decided to do like Brno, administering the tyre wear well and then attacking in the final part of the race, especially because I was one of the few riders who had chosen ‘soft’ tyres and my riding style allowed me to conserve them until the end. When I found myself fighting against Marquez I knew that it was going to be difficult to pass him, so I decided to improvise by making the best use of the Desmosedici GP’s acceleration and it worked perfectly. Now we’re third in the championship standings, but above all I’m proud and very pleased with the way we’re working because the feeling with the bike is better and better all the time and I believe we can fight for the win in many other races. Now let’s just enjoy this moment with all the team and I’m also very happy for them.”

Marc Marquez – Today I enjoyed the race a lot because I finished second but really gave it everything. In Brno I didn’t have enough confidence, while here, I tried. I started to push hard from the beginning as I had chosen the hard rear tyre with the target of trying to open a gap early on, because I knew that Dovi and Lorenzo would be very fast at the end of the race, when the tyres dropped. That was our strategy today and for a short while I believed I would be able to carry it out, but soon they caught me again. It was a great battle. I tried to defend, to change my lines, but it was impossible. This is a track where they’re very strong, especially on the straights. In these situations we try to manage at our best, and we also have our very competitive points; we were very strong on braking and entering the corners. For sure we will use those strengths and have our say at other tracks. So far we’ve always been right there, always on the podium, and that’s the most important thing. We lost only five points on Lorenzo and gained more on Valentino, who’s second in the standings. We’re happy with this result; we’ve done a great job here.

Andrea Dovizioso (Ducati Team #04) – 3rd
“At the start of the race unfortunately I was never able to get in amongst the battle for first place, because I couldn’t pass Jorge even though at that moment I was quicker than him, but to do that I used up the rear tyre too much, it dropped off a lot ten laps from the end, and this affected my race a bit. From that point onwards, I wasn’t able to do much because I couldn’t link up the corners very well. Pity, because we were pretty good under braking, but every race has its own story and we must always try and interpret the tyres in the best possible way.”

Right on Marquez’ tail over the line and passing the reigning Champion into Turn 1, Lorenzo pulled the pin and took over at the front as teammate Dovizioso ran wide and dropped off the lead duo. But that lead duo didn’t stay the same way around for long as they dueled it out, heading a bit wide at one point before Lorenzo was back ahead and the two regrouped.

With 3 laps to go Lorenzo went wide at Turn 3 and Marquez went through, but of course the Ducati struck back – with a brutal move at Turn 9. On the penultimate lap Marquez again attacked at Turn 3, but Lorenzo led the two over the line to begin the final lap – and the gloves were most definitely off.

Locked together, the big attack came again at Turn 3 as Marquez dived straight for the inside – but Lorenzo held his line and was able to regain the ground immediately on the exit. Pushing hard and the Repsol Honda in second squiggling around in the braking zones, Marquez looked threatening around the remainder of the final lap but the ‘Spartan’ was not for being caught – taking the victory in style and denying Marquez the chance at a final lunge.

Behind ‘DesmoDovi’ in third, Cal Crutchlow (LCR Honda Castrol) put in an impressive performance to take fourth as top Independent Team rider to put his Spielberg demons to bed after two fifteenths over the past two years, with Danilo Petrucci (Alma Pramac Racing) also able to bounce back after a tough race at the venue last season to complete the top five. Petrucci now leads the Independent Team standings by a single point from Johann Zarco (Monster Yamaha Tech 3), with Crutchlow only another point back.

Valentino Rossi (Movistar Yamaha MotoGP) put in a stunning ride through the field, with the rider from Tavullia moving through from fourteenth on the grid to fight off Dani Pedrosa (Repsol Honda Team) in a high-calibre battle for sixth. Behind the two, Alex Rins (Team Suzuki Ecstar) took eighth after mixing it at the front nearer the start, making for a solid result at a more difficult track for the Hamamatsu factory.

Next up is Silverstone, the stage of the first serious showdown between Lorenzo and Marquez back in 2013. Will we see another repeat? Find out in two weeks as MotoGP™ heads to UK.