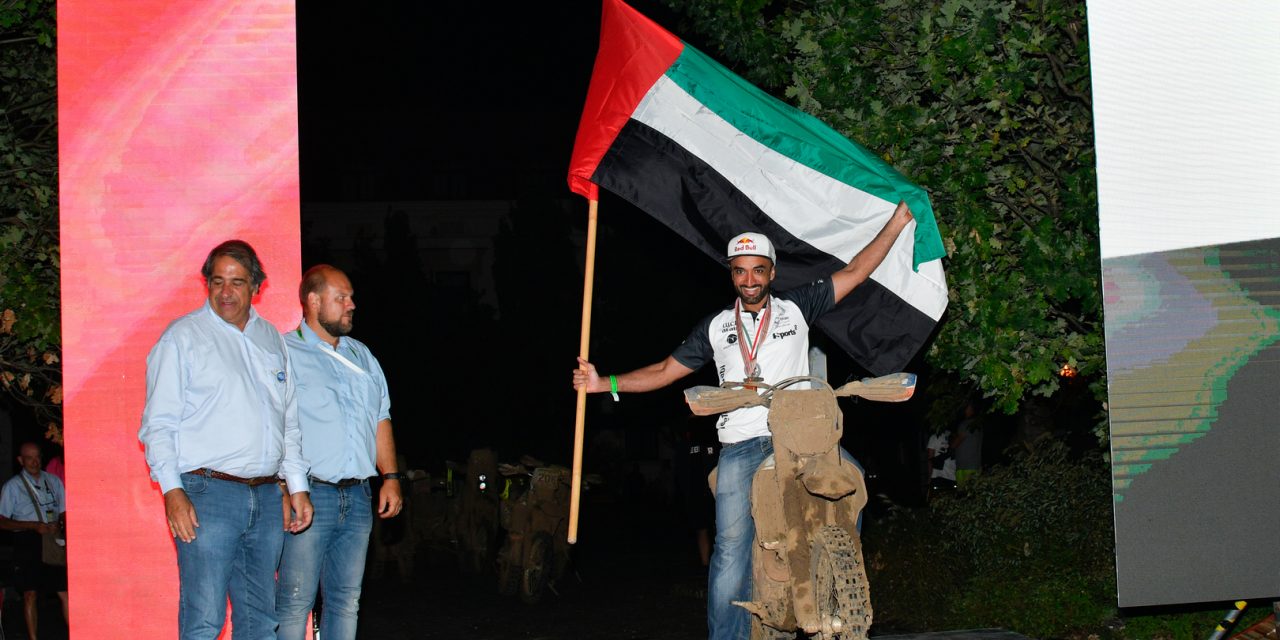 This new achievement by Mohammed Al Balooshi sets yet another milestone for the sport in the UAE, reinforcing once again his role as pioneer and a constant figure in the development of the sport in the country; but the reach of this outstanding accomplishment goes far beyond our country’s limits placing him as the first Arab to ever win a World Title in a motorcycle in the FIM Off Road series. Exultant, yet exhausted after the effort, Balooshi commented

“I am very happy to have been able to put this medal to the achievements of the UAE. Our country came a long way in the motorsport and it’s an honor to be able to make this humble contribution, and a motive of great pride to have my name next to the UAE flag, engraved forever in the FIM records. I hope to also represent well the Arab world and do justice to so many great athletes who work hard, and keep pushing their limits, always following their passion. I’m struggling with words right now to describe how proud and happy I feel for me and my team, for my country, for the sport…”

The weekend was filled with drama at Veszprén, the picturesque city hosting the last round of the World Cup in Hungary, which constitutes at the same time one of the oldest urban areas of the region. Heavy rain over the past week ravaged the rally terrain, resulting on many areas of the planned route of the race becoming completely inaccessible and a serious threat to the competitor’s integrity. The extreme situation with flooded fields and dangerous mud banks which in cases were close to 1 meter of depth, forced the organizers to even have to modify parts of the race on the go, which added to an already challenging weekend. With over 15 years of career as professional athlete under his belt, and all national and regional awards that can be possibly won in his palmarés, Al Balooshi is not new to difficulties. His drive and determination have taken him a long way and bring to memory the time in which roughly 2 years ago, after leading Pharaos Rally in Egypt all week, and then suffering a mechanical set back on the last day of competition, he just pushed his motorcycle for 5 kilometers through ups and downs of the Egyptian desert, to finish in third position overall. The KTM Rally Replica weights 146 kgs. With an empty tank, by the way, so the real weight that day was close to 160 kgs. This extraordinary effort and his unbreakable determination gave Balooshi a podium and allowed him to hold the UAE flag high in front of the world, but also gained him the reputation of hero not only in the UAE but in the international motorsport community, where he is deeply respected and considered part of this super exclusive elite of the best of the best riders in the world. Balooshi was also the first Emirati competitor to complete the legendary Dakar Rally  on a motorcycle earlier this year in South America, the so called “toughest rally in the world” or “the bone breaker” like many like to call it. “It took us years working as a team, we faced a lot of challenges, and struggled a lot to reach to this point. This achievement is the result of very hard work, a lot of talent, and a strong believe. Even when it looked that we couldn’t go on, we never stopped believing in the project, in the talented and professional athlete we had, and in the dream of taking the UAE to a scene that has been ruled by Europeans throughout its history.  We believed we could win this for our people and today the dream is a reality. We are very proud of working with such an amazing athlete like Mohammed who has strong moral and professional values!  Also at this special time we need to thank all of those companies and friends who supported the project, some of them stayed with us longer than others, but all of them have been instrumental to Mohammed’s Word Title” and he closed with a message for younger generations of athletes by saying “ I believe that this a great example for new UAE talents, sportsmen and women who are impassioned about their sport, to take the steps of this great athlete, professionalise their sport, and never stop believing and fighting to conquer their dreams. ”

The last day at Hungarian Baja started with rain and changing terrain moving from supper slippery mud, to dry and rocky areas, back to thicker, sticky and deeper mud which as soon as gets in contact with the tyres, starts accumulating to end up covering the tyre blocks and converting the full tyre into a slick surface, right in the moment when the terrain is slippery, and competitors need the safety provided by the blocks’ grip. Al Balooshi also had to battle with mechanical problems, struggling with his KTM’s petrol pump all day, which continued failing when getting in touch with water. These difficulties costed him in the end a penalty which threatened with setting him back in the results, but luckily the advantage accumulated earlier in the race and in season, allowed him to sustain his position and emerge as the new King of Bajas.

Professionalism, strength, fitness, even mechanical knowledge, the UAE man had to put everything he had at play during Hungarian Baja to overcome adversity and the bad luck of having his bike giving him serious trouble, but in the end yet again he arose strong and victorious granting the World Title glory for the United Arab Emirates. Grateful for the support received the new sovereign Captain Balooshi added: “This moment is very overwhelming, and I will probably need a few days for this to sink in and get used to the idea that I’m World Champion, the dream of my life. But I couldn’t have done without the backing of many people and companies that I need to name publicly. Of course Sports2 and my dear friend Mahir Badri who have never let go my hand, but also Redbull who have been a strong support and dear friends for many years, Yahsat Satellite Internet because without their support at the early stage of this program we wouldn’t have had the chance to move forward, Abu Dhabi Aviation, Maximus Air and Al Ain water gave us their backing when needed, the Abu Dhabi Sport Council allowed us to continue dreaming at a point in which we were struggling  a lot. Emirates Airline supported us with their amazing logistics, Thuraya Telecom was there for us as well. Even an international brand like Casio believed in me and in the project and joined forces with us so we could keep going. The ATCUAE granted us the permissions to participate without objections and in many cases even waving the cost of the permits relieving the burden on our always skinny budget. When you are a small private team like us, every single bit of support counts and makes a difference, for this I am grateful, and I want to share a part of this achievement with you all. This win is also yours”