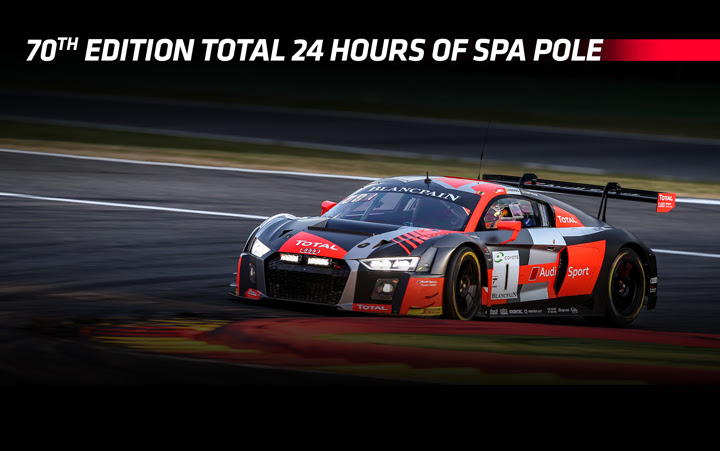 The #1 Audi Sport Team WRT R8 LMS will start this year’s Total 24 Hours of Spa from the head of the field after a pair of blistering laps from Dries Vanthoor in this evening’s SuperPole session.

The fastest 20 cars from yesterday evening’s qualifying progressed to the deciding shootout ahead of the race’s 70th edition, with each crew nominating one driver to contest two flying laps of the Spa-Francorchamps circuit.

In the event only 19 cars were able to contest the session after a heavy accident in warm-up sidelined the #88 AKKA ASP Team Mercedes-AMG GT3. Raffaele Marciello was at the wheel at the time and had also been scheduled to contest SuperPole, but the French squad will now focus on repairing the damage in time for the start of the 24 Hours.

The 19 remaining drivers ran in reverse order to their finishing positions in Thursday’s qualifying session, taking to the track at one-minute intervals.

Though his crew had taken fourth position on average times during Thursday’s qualifying, Vanthoor had in fact set the fastest individual lap and was therefore considered to be among the leading contenders to secure top spot in SuperPole.

In the event, he made it look easy. The youngster was the 16th driver to emerge on to the track and set the fastest time of the session on his first flying lap, then went even quicker on his second run to score a truly dominant pole position. For his efforts, the Belgian ace was rewarded with a special commemorative tyre by Pirelli to mark the 70th edition of the Total 24 Hours of Spa.

Vanthoor’s supremacy was confirmed by his best lap time, a 2m18.578s, which made him the only man to get below the 2m19s barrier and put 0.605s between the WRT pilot and his nearest rival.

That was another local favourite, Maxime Martin, whose time of 2m19.183s aboard the #62 R-Motorsport Aston Martin V12 Vantage had looked set to secure pole until Vanthoor showed his ultimate pace.

Nevertheless, Martin’s effort ensured that two Belgian drivers finished on top of the order at the country’s most famous circuit, while also setting the #62 crew up perfectly for the 24 Hours.

Kelvin van der Linde was an impressive fifth in his Montaplast by Land-Motorsport Audi R8 LMS, ahead of another strong performer, Come Ledogar, who led much of the session in his Garage 59 McLaren 650 S GT3. Yesterday’s qualifying pacesetter, the #34 Walkenhorst Motorsport BMW M6 GT3, will start from eighth spot.

With SuperPole complete, the stage is now fully set for the 70th edition Total 24 Hours of Spa. The biggest GT race on the planet will begin on Saturday at 16.30 local time, with the #1 Audi Sport Team WRT machine leading the field into a twice-around-the-clock battle at the iconic Spa circuit.

Dries Vanthoor, #1 Audi Sport Team WRT Audi R8 LMS: “This wasn’t an easy one. When I got in the car, I decided to give everything that I possibly could. This pole position is thanks to WRT, Audi, the engineers, and all the people working in the background. Our car was absolutely amazing. Endurance races can help us score important points, especially for the Intercontinental GT Challenge, but it is going to be a long race and a lot can still happen.”

Maxime Martin, #62 R-Motorsport Aston Martin V12 Vantage: “Firstly, I would like to congratulate Dries and Nico for their performances today. An all-Belgian top-two is a nice result, especially here at Spa. This will be the first Total 24 Hours of Spa for R-Motorsport, so a place on the front row is just amazing for our guys.”

Nico Muller, #2 Audi Sport Team WRT Audi R8 LMS: “The temperature affected our car today, but fortunately we had time to find a better set-up. As usual, WRT did an amazing job and gave us a very quick car. Dries pulled it out of the bag and congrats to him for that, because it was something quite exceptional. Now I just can’t wait to go racing and challenge Maxime and Dries tomorrow.”