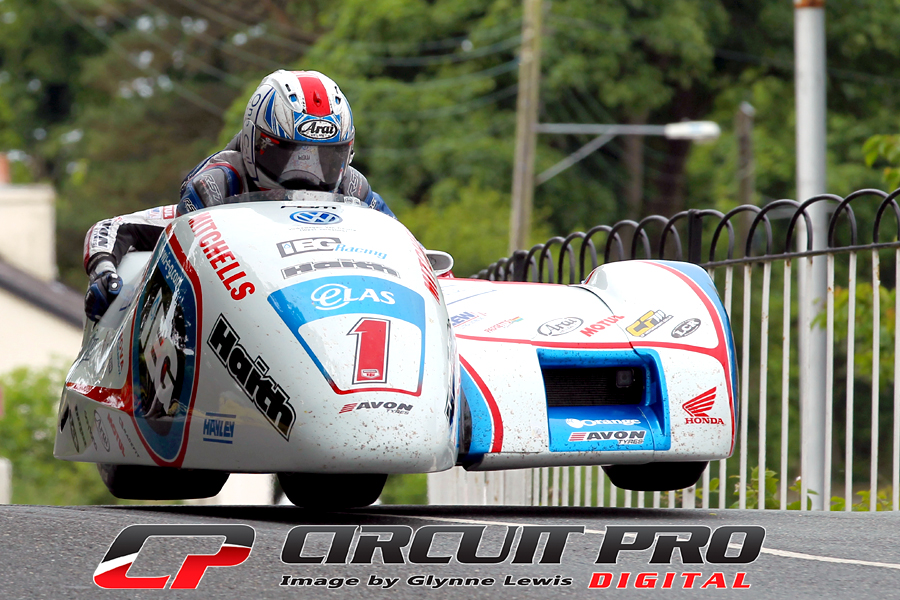 Ben and Tom Birchall created history in Friday morning’s second Sidecar race at the 2018 Isle of Man TT Races when they became the first sidecar team to lap the 37.73 mile Mountain Course in under 19 minutes.

The Mansfield brothers overhauled early leaders John Holden/Lee Cain at the end of lap one and with their second lap being a stunning 119.250mph, they eventually won by 22.92seconds with Tim Reeves/Mark Wilkes again finishing third.

Holden/Cain led through Glen Helen on the first lap, their advantage over the Birchalls 1.4s with Reeves/Wilkes only 0.78s adrift. Patrick Blackstock/Lewis Rosney were going superb in fourth as Alan Founds/Jake Lowther and Dave Molyneux/Dan Sayle completed the early top six.

By Ramsey, Holden/Cain had eked out an extra two tenths of a second over the Birchalls but the Birchalls had a quicker run up and down the Mountain to seize the lead with an opening lap of 117.185mph which meant they went into lap two with a lead of 1.89s over Holden/Cain. Reeves/Wilkes broke the 116mph barrier for the first time to maintain third and they were still only 5.5s behind Holden/Cain. Founds/Lowther and Molyneux/Sayle were still in fourth and fifth but Conrad Harrison/Andy Winkle had now moved up to sixth.

Meanwhile, history had been made further back as Estelle Leblond/Melanie Farnier became the first female driver to go above 110mph and her lap of 110.732mph saw her slot into ninth place. Newcomers Michael Jackson/Harry Payne were also going well, their lap of 108.521mph putting them in 13th. Throughout the second lap, the Birchalls increased their lead again with another new lap record of 119.250mph, the first sub-19 minute lap for the sidecar class. This saw them with a comfortable 15.1s lead over Holden/Cain who had lapped at 117.878mph with Reeves/Wilkes setting another personal best lap of 117.729mph to slot into third, seven seconds behind Holden/Cain.

Fourth to sixth stayed the same as Leblond/Farnier put in another 110mph plus lap and Jackson/Payne improved to 109.198mph. There was no let up from the Birchalls and they duly took their fifth TT win in a row their eighth in total by 22.92s as Holden/Cain and Reeves/Wilkes completed the podium, just as they had done in the first race. Reeves/Wilkes duo taking third place on the podium once again

Founds/Lowther took fourth and it was Blackstock/Rosney and Harrison/Winkle who took fifth and sixth as Molyneux/Sayle retired on the final lap.

Speaking afterwards a delighted Ben said “I’m so happy and although I didn’t have the best first lap, I had a good run down the Mountain to get into the lead. John’s riding really well and I was a bit scrappy on that first lap but I smoothed things out and pushed hard on the second lap which sorted the job out. Now we can have a pint to celebrate.”