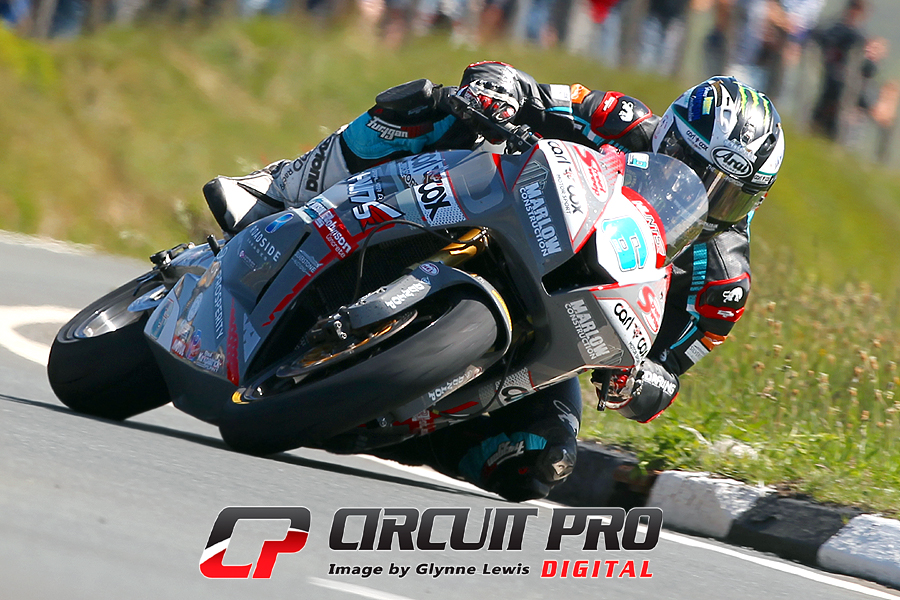 Dunlop’s second lap of 129.197mph shattered his own lap record from 2013 and it propelled him to his second win of the week and 17th in total. Harrison’s second place went some way to make up for the disappointment of retiring from Saturday’s RST Superbike race with the same applying to Peter Hickman who took third.

On the opening lap Harrison led through Glen Helen with the Bradford rider holding a one-second lead over Dunlop with James Hillier a further two seconds behind in third. Hickman, Gary Johnson and Lee Johnston rounded out the top six.

At Ballaugh, the gap between first and second was just 0.2s and by the time they swept round Ramsey Hairpin, Dunlop was in front by a second. Hillier was now eight seconds adrift in third with Hickman still in fourth only 0.2s behind but Conor Cummins who was now up to fifth ahead of Johnson.

Dunlop’s opening lap was 128.265mph which put him 1.7s ahead of Harrison with Hickman now in third place, his advantage over Hillier 2.5s. There were changes happening further back too with Johnston now ahead of team-mate Cummins as Johnson, Josh Brookes, Derek McGee and Jamie Coward completed the top ten. Second time around through Glen Helen and Harrison had pulled back a tenth of a second and it now looked to be a two-horse race with Hickman now some 14.2s adrift. He’d edged away from Hillier though with the gap up to 3.3s with the gaps to Johnston and Cummins three seconds each.

On the run to Ballaugh, Dunlop added another second to his lead and by Ramsey it had increased further to 4.6s. As he came into the pits for his solitary pit stop, he had set a stunning new lap record of 129.197mph which gave him a healthier advantage of 6.4s. Harrison was 22.7s clear of Hickman but the final podium position was still wide open with Hickman only 3.6s ahead of Hillier who, in turn, was only three seconds ahead of Johnston. Johnson, Brookes, James Cowton and McGee were filling seventh to tenth.

Hillier was now leading on the road and a superb pit stop meant he was only 0.2s adrift of Hickman at Glen Helen on lap three and over ten seconds clear of Johnston whilst Dunlop’s advantage had moved up to nine seconds. And by Ballaugh, Hillier had taken over third from Hickman albeit by 0.6s but this had doubled to 1.2s by Ramsey.

Going into the final lap, Dunlop and Harrison were now together on the road with the official gap being 9.4s and Hillier still held onto third. The difference between him and Hickman still only 1.5s. Cummins was a further 19.2s back in fifth with Johnston continuing to hold onto sixth although the gap to Johnson was down to five seconds. Peter Hickman once again on the podium in third place spot

The final lap saw Dunlop and Harrison circulate together and with neither having any issues, they came home in first and second. The duo eased back in the closing stages so much so that Harrison was only 0.258s ahead of third placed Hickman, who got the better of Hillier for the final podium position by 1.8s.

Cummins was secure in fifth but sixth place was also in doubt until the chequered flag and Brookes took the position after a final lap in excess of 126mph. Johnson, Johnston, Cowton and Ivan Lintin completed the top ten.

Speaking in parc ferme Michael said “I genuinely think I can do 130 mph. Dean’s riding fantastically well and I knew he’d be fast out of the blocks again whilst we haven’t been out on the 600 much during practice, so I just kept calm and chipped away.”

“I’ve done quite a bit of work with my fitness but four laps on the 600 are quite hard as it’s difficult to tuck in. Peter (Hickman) says he finds it hard too but whilst his problem is his height, mine’s width and you can’t remove bones or replace big hips!”

“Dean was pushing on, Peter was pushing on and we’re all pushing on but once I could see Dean coming back to be, my pit board starting to increase. 129mph is some going on a 600 but once I caught Dean, I just sat behind him so it’s nice to win again on one of my own bikes.”

Dean Harrison took his first win of the week with an 18.6second victory over Peter Hickman in the Monster Energy Supersport Race 2 at the Isle of Man TT Races. The Bradford rider broke the race record by 8.749s in the process.

Harrison led from the start and continued to pull away from Michael Dunlop with Dunlop picking up a thirty second penalty for exceeding the pit lane speed limit at his pit stop. That gave Harrison the breathing space he needed and he followed up his 2014 Lightweight victory with a second TT win as Hickman and James Hillier joining him on the rostrum. On the opening lap as he has done for most of this week, Harrison led through Glen Helen, his lead over Dunlop 1.8s but Hillier was certainly in touch, only 0.4s behind Dunlop. Hickman was a further 1.8s back with Conor Cummins and Gary Johnson holding on to fifth and sixth.

By Ramsey Hairpin, Harrison had increased his lead over Dunlop to 2.7s and whilst Hillier was still in third, 4.3s behind Dunlop. Hickman had closed to within 0.1s of Hillier as Cummins and Johnson held station.

An opening lap of 128.188mph gave Harrison a 3.6s lead over Dunlop and Hickman who had moved ahead of Hillier albeit by the tiny margin of 0.197s. Cummins was still in fifth but team-mate Lee Johnston had moved up to sixth with Josh Brookes in seventh thus relegating Johnson to eighth. Derek McGee was again going great guns in ninth with James Cowton tenth.

As they swept through Glen Helen on the second lap, Harrison’s advantage had stretched to 4.5s over Dunlop and Hickman had edged away from Hillier, the gap being now one second. The two Padgetts Honda’s of Cummins and Johnston continued to occupy fifth and sixth.

Harrison continued to pull away from Dunlop through lap two and with a lap speed of 129.099mph, just outside Dunlop’s lap record from Monday’s race. He extended his lead to 8.3s as he came into the pits. The battle for third was still raging though with Hickman still only two seconds ahead of Hillier, who was now leading on the road having overtaken Cummins who was now enjoying a healthy 20s advantage over Johnston. Brookes, Johnson, McGee and Cowton was now the order for seventh to tenth.

Dunlop changed his rear tyre but there was drama as he was given a 30s penalty for exceeding the speed limit in pit lane at 60.2km/h and that meant Harrison’s lead had shot up to 18.3s over Hickman as he rounded Glen Helen for the third time. Hillier was still well in touch, the deficit now 1.4s with Cummins up to fourth as Dunlop slipped back to fifth.

Through Ramsey, Harrison was continuing to pull away over Hickman and he was doing the same over Hillier. Dunlop was closing in on Cummins though and Brookes had now moved up to sixth.

Going into the fourth and final lap, Harrison had a comfortable lead of 19.5s over Hickman who was now looking more secure in second, Hillier now 7.9s in arrears and Cummins had edged away from Dunlop also.

There was little change in the running order and Harrison, who was now leading on the road, duly crossed the line for his second TT win with Hickman and Hillier back on the podium once more in second and third.

Cummins, Dunlop and Brookes completed the top six with Johnston, Johnson, Cowton and Ivan Lintin rounded out the top ten as McGee’s excellent run came to an unfortunate end on the final lap with a retirement at Sarah’s Cottage.

A delighted Harrison speaking after the race said. “The second win has certainly taken longer to come than I would have liked. Everyone sets their bike differently in an effort to win and the team did make a few changes after Monday’s race which helped make the lap times faster but I felt really relaxed today too.”

“My first board said ‘P1, +3’so I kept pushing and I was pulling away roughly eight tenths of a second of 1.2s each sector which felt pretty good. I kept pushing though as you never know what can happen and we never had any plans to change the rear wheel at the pit stop, it was just a case of filling the tank to the brim and setting off down Bray Hill again.

“When I saw ‘+22’ on my next pit board, I thought someone must have dropped some wheel spacers or something and after that, I could ease back a bit. I’ve been trying all week but the bike was faultless and after what happened in the Superbike race and then taking a second and a third, I was beginning to think it wasn’t meant to be so I’m over the moon with the win.”