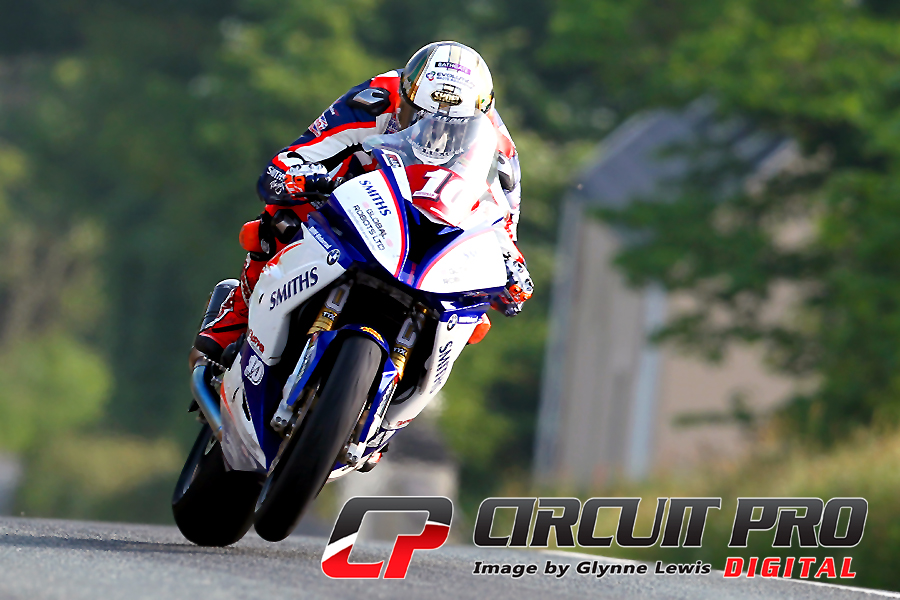 Louth’s Peter Hickman on his Smiths Racing BMW claimed his first victory at the Isle of Man TT Races on Monday afternoon when he took a sensational Superstock race by 4.4seconds from Michael Dunlop with Dean Harrison in third place. Hickman fought back from an error on the first lap that saw him run straight on at Braddan Bridge and caused him to drop back to tenth.

With two laps in excess of 134mph, his final lap being a stunning new lap record of 134.403mph, which was just outside Harrison’s outright lap record from Saturday’s Superbike race, enabled Hickman to finish in a new race record some 58.7s quicker than the old mark.

Harrison led Dunlop by three and a half seconds through Glen Helen on the first lap with Gary Johnson in third and Michael Rutter, James Hillier and David Johnson filling fourth to sixth places and opening lap of 133.073mph gave the Bradford rider the leads, 4.3s clear of Dunlop with Hickman recovering brilliantly back up to third place.

As they got to Glen Helen, Harrison’s lead was up to 5.7s as Hickman closed to within 1.4s of Dunlop and by Ballaugh, he went ahead of the Ballymoney rider by 0.8s. The race was all about these three riders as Rutter was now over 22s adrift in fourth.At the head of the field, Hickman was really pressing on and a sensational lap of 134.077mph saw him arrive at his pit stop with a 1.2s lead over Harrison with Dunlop only 1.8s behind in third.

Just three seconds covered the trio. David Johnson had moved up to fourth ahead of Rutter and Hillier but it was extremely tight as just one second separated the three riders. Meanwhile, Davey Todd became the second fastest newcomer ever with his lap of 127.890mph moving him up to an unbelievable seventh place.

The pit stops shuffled the order with Dunlop hitting the front for the first time at Glen Helen on lap three, his lead over Harrison was just half a second with Hickman slipping back to third albeit only a further 0.7s in arrears. Johnson was holding onto fourth but Hillier had moved up to fifth at the expense of Rutter whilst Gary Johnson was another high profile retirement. Dunlop narrowly misses out on victory after finishing 4.4 seconds behind Hickman

Dunlop still led at Ballaugh but only just with Hickman back up to second and only 0.178s adrift. Harrison was still very much in contention, one second behind Hickman.Hillier had now got in front of Johnson by 0.047s. At Ramsey Hairpin Hickman was back ahead by 0.87s with Harrison now 1.7s behind Dunlop with the battle for fourth continuing to rage, Johnson now back ahead of Hillier by 0.088s!

The scene was set for a thrilling final lap and although just 0.5s split leader Hickman and Dunlop, it looked like Harrison was racing for third as he’d slipped almost five seconds behind Dunlop.

Hickman added another eight tenths of a second to his lead at Glen Helen only for Dunlop to pull two of those tenths back on the run to Ballaugh. By Ramsey, Dunlop’s charge continued as he brought the gap down to 0.146s.

However, Hickman responded immediately and set a sensational sector time from Ramsey to the Bungalow, the fastest ever, as he did from the Bungalow to Cronk ny Mona and a new lap record of 134.403mph, just a fraction outside Harrison’s outright record from Saturday, gave him his maiden TT win. Rounding off the Superstock podium Dean Harrison in third place

Dunlop was an eventual 4.4s back in second with Harrison in third and Johnson, Hillier and Rutter filling the top six places. Martin Jessopp, Sam West, Ivan Lintin and Todd completed the top ten.

Speaking afterwards Peter said ““It’s probably the hardest I’ve ever ridden around here whilst the wind also caught me out a couple of times over the Mountain as it was constantly changing direction. I’ve been fast on the Superstock bike all week and rode as hard throughout the race as I could so this means a lot to me, my family and the team. With a podium in the Supersport race after a really good scrap with James Hillier, it’s been a good day and certainly makes up for the retirement in Saturday’s Superbike race.”