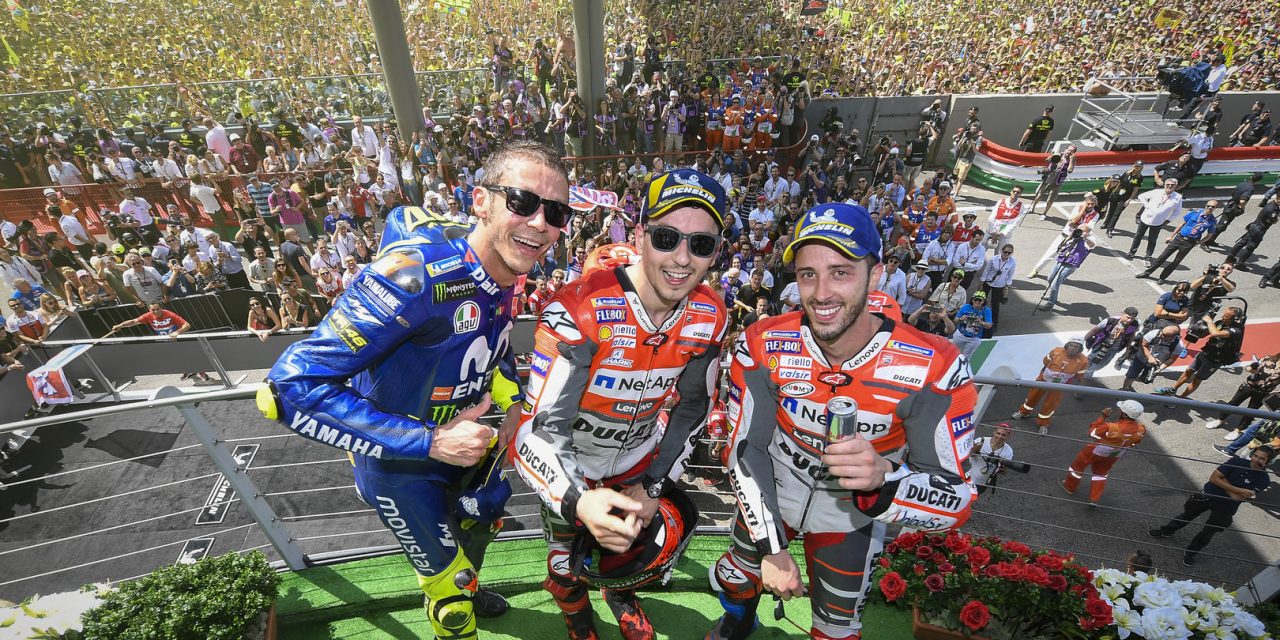 A first imperious win for Ducati in a 1-2 for the team sees the five-time World Champion reign in Italy, with Rossi completing the rostrum.

Jorge Lorenzo (Ducati Team) has taken his first win in red as he led a 1-2 for the Ducati Team at Mugello, uncatchable and untouchable to cross the line over six seconds clear for his first victory since Valencia 2016 – and his seventh Italian GP win. Andrea Dovizioso made it double podium glory for the Borgo Panigale factory as he took second, fending off a late charge from polesitter and crowd favourite Valentino Rossi (Movistar Yamaha MotoGP). The ‘Doctor’’s podium finish was another history maker in a milestone day at Mugello as the rider from Tavullia became the first to get more than 5000 premier class points, meanwhile Championship leader and reigning Champion Marc Marquez (Repsol Honda Team), crashed and remounted but failed to score.

Lorenzo took the holeshot as Marquez shot through from the second row to blast into Turn 1 fighting for second, but Rossi held onto it until the reigning Champion then struck a lap later into San Donato, tucking in behind Lorenzo followed by Rossi, Andrea Iannone (Team Suzuki Ecstar) and Dovizioso.

The number 99 was keeping the pace hot at the front and the first bolt of drama suddenly then hit just behind, as Marquez slid out into the gravel at Turn 10 – able to remount, but points looking like a pipe dream. That left Rossi trailing Lorenzo, as Dovi struck to take third from Iannone. The Italian then picked his way past another compatriot as he sliced past Rossi soon after, then left with only his teammate ahead of him. Rossi then went wide into Turn 1, letting Iannone past.

Meanwhile, Danilo Petrucci (Alma Pramac Racing) – after getting blocked wide by Marquez at the start – was on a charge back, up to fight and on Rossi’s tail with 16 to go. As Iannone began to suffer and the ‘Doctor’ too, ‘Petrux’ pouced and move through – but it was soon a five-rider fight for the podium as Cal Crutchlow (LCR Honda Castrol) joined the battle.

At the front, however, the story was red. Dovizioso had been holding the gap at just over a second, but Lorenzo just kept pulling the pin. Lap after lap, the ‘Spartan’ got the hammer down and simply pulled away into the distance – six seconds clear over the line, collapsing on the tank to take in the emotions.

As the laps ticked down, Rossi and Iannone had emerged at the head of the group fighting for third, with a fantastic battle between the two home heroes before the rider from Tavullia was able to escape. He was then even able to hone in on Dovizioso on the final lap but it wasn’t quite enough, taking third to take his premier class points total over 5000 as the grandstands erupted in yellow smoke.

Iannone took fourth just 0.022 ahead of his teammate Alex Rins, with Crutchlow able to get the better of Petrucci to take P6 from the initial hard charger. Maverick Viñales dropped back from his front row start to take eighth but was on Petrucci’s tail by the flag, and both had Alvaro Bautista (Angel Nieto Team) for close company as the number 19 took his second top ten of the year in P9. Johann Zarco (Monster Yamaha Tech 3) completed the top ten after a more difficult weekend.

There were a number of high-profile crashers including Jack Miller (Alma Pramac Racing), ending his run of eight consecutive top tens, and Dani Pedrosa (Repsol Honda Team), who went down in a tangle with Takaaki Nakagami (LCR Honda Idemitsu) at Turn 2 near the start.

Pol Espargaro (Red Bull KTM Factory Racing), meanwhile, turned around a difficult weekend to take P11, ahead of another impressive performance from Hafizh Syahrin, who was top rookie for Monster Yamaha Tech 3 in P12. Marquez crossed the line in P16, taking no points home from Mugello.

From a difficult weekend behind enemy lines in Italy, Marquez still leads the title fight as MotoGP™ returns onto his home turf. Next is the Circuit de Barcelona-Catalunya – where Lorenzo, Pedrosa and Rossi have some very good memories, and Dovizioso won last year.