TCR: Engstler gets his first TCR Middle East title as curtain falls on ME series 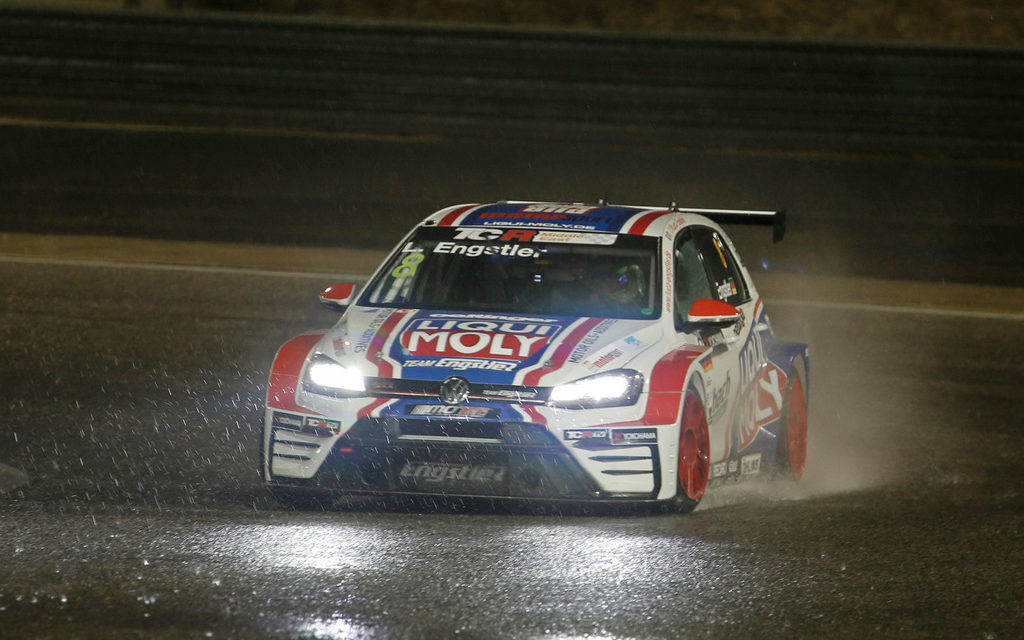 At the age of 17, Luca Engstler has become the youngest driver ever to claim a title in any TCR series. The German teenager had made a stunning debut in the category last year, winning the opening race of the TCR Middle East Series at Dubai and later in the season was awarded with the TCR Germany’s Rookie Trophy.
The start for his second year was even more impressive: another victory at Dubai in the 24-hour race counting towards the 24H TCE Series and then three wins out of five races in the TCR Middle East.
Engstler was determined to settle the matter in ‘full attack mode’ (to use his own words). He claimed pole position on Friday and then – in a very unusual rainy evening for the region – he won Race 1 in an authoritative way. The title was his and nobody paid attention to the cancellation of the second race because of the weather conditions.

Despite the 30 kilos of maximum Success Ballast on board of his Volkswagen Golf GTI, Engstler seemed to flly on the wet track, improving his times and leading gap consistently, lap after lap.

Giacomo Altoè, the winner of the season’s opening race at Abu Dhabi, was not even in the position to challenge his competitor. He had struggled in the previous event at Dubai with his Audi laden by the Success Ballast and was never on the pace with Engstler in Bahrain. Eventually he pocketed a third place that was worth the second position in the Drivers’ standings ahead of Engstler’s teammate Florian Thoma. The young Swiss made a great recovery today, climbing up to second after a poor start.

The icing on the cake for the Liqui Moly Team Engstler was the Teams’ title, grasped with a comfortable advantage of 53 points. Race 1 – Luca Engstler is champion in the… rain!

Luca Engstler secured the 2018 TCR Middle East title in a Race 1 in Bahrain that will certainly be remembered because of the… heavy rain (certainly not an usual event in this part of the world) that poured and got even harder throughout the entire evening.

The bad weather did not impress Engstler who took a very good start from pole position in his Liqui Moly Team Engstler Volkswagen Golf GTI and pulled away steadily towards the chequered flag. His teammate Florian Thoma took second to offer another 1-2 finish to the German squad, which clinched the Teams’ title as well.

After a very cautious start, the Swiss charged back from fifth to take P2, after some nice fights with the drivers sporting the colours of the Adria International Raceway/TCR Academy. Among those, Lorenzo Veglia (VW Golf) was the best placed in the early stages, before he was forced to bow to Giacomo Altoè and Jordi Oriola, both in Audi RS3 LMS cars, when the rain got heavier.
The podium finish allowed Altoè to secure the runner-up honours in the Drivers’ standings ahead of Thoma.
With the title decided in Race 1 and track conditions getting worse, the Race Director, after consulting all drivers during a short meeting, decided to cancel Race 2. Certainly a history-making feat in Middle East’s motorsports!

Start – After two extra formation laps because of the wet track, the race is off, with Engstler pulling away perfectly; Jordan and Thoma have a slower start and are passed by Veglia and Altoè
Lap 1 – Engstler leads from Veglia and Altoè, while there is big fight between Oriola, Thoma and Jordan for fourth; Himmo spins at the last corner and rejoins
Lap 2 – Engstler and Veglia seem capable of pulling away, as Altoè can’t keep their pace
Lap 5 – With the rains becoming harder, the gaps increase: Engstler is 5 seconds clear of Veglia and 7 of Altoè
Lap 7 – Al Alawi and Ryba fight for seventh
Lap 8 – Thoma is in a charging pace, he passes Altoè for third and starts chasing Veglia
Lap 11 – Thoma closes in on Veglia and is now half-a-second behind
Lap 12 – Thoma attacks and passes Veglia for second
Lap 13 – Himmo goes off track and remains stuck in the gravel
Lap 15 – The rain pours harder, while Ryba serves a drive-through for overtaking Al Awali with four wheels out of the track
Lap 17 – The fight is now between Veglia and Altoè for a podium position, the two young Italians are separated by 0.5 seconds
Lap 18 – Veglia is passed by Altoè; soon afterwards Veglia’s car aquaplanes and Oriola takes the opportunity to steal fourth position from the Italian
Lap 20 – The rain intensifies and all the drivers are trying to stay on the track rather than fighting for the positions
Lap 23 – Engstler wins from Thoma and Altoè

Quotes from the podium finishers
Luca Engstler (winner): “It’s the perfect evening for me! I am really happy of this success and the TCR Middle East title! The car felt perfectly, although track conditions were really tricky. This is certainly not the kind of weather you expect to find in Bahrain, so the whole experience feels a little bit crazy… but I was not afraid of the wet track, as it actually fits the Golf quite well. I had a good start and then really enjoyed the driving. I want to thank my team for the excellent work done, and I also want to congratulate my friend Giacomo [Altoè] for being a great and fair rival in this series. We had good fights, always very clean and nice, and it was a pleasure competing against him.”

Florian Thoma (second): “It was a great result for the team and I am very happy with my podium finish. Believe it or not, this was my first race in the rain ever. Except a half-hour test at Hockenheim, I had never driven a race car in the rain before, and certainly did not expect to do that in the Middle East! Considering this, I am very satisfied with my performance. I was too cautious at the start and lost positions but when I got a fair sense of where the limits were today, my pace was good and I could climb up to second, after some nice and clean overtaking manoeuvres.”

Giacomo Altoè (third): “First of all, congratulations to Luca [Engstler] for his title, he was the strongest and deserved it. Under the circumstances, finishing third and on the podium here was a very good result. Despite a faultless race, there was no way to keep with the pace of the Golf cars. The conditions were really difficult, with a lot of water everywhere and streams crossing the track in some points. Because of the rain and darkness, but also the track’s surrounding, it was very difficult to have reference points and towards the end of the race, driving was becoming quite risky.”