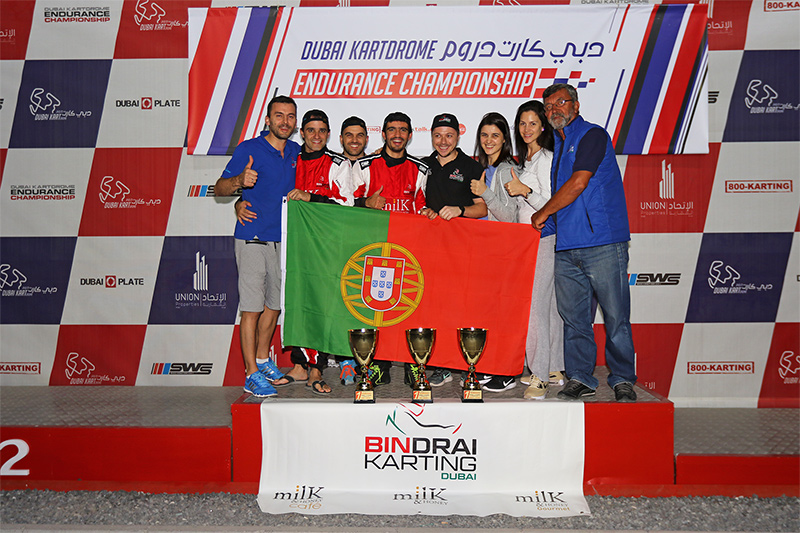 Dubai, UAE, 25 February 2018:  After 553 laps and twelve continuous hours of racing, Portuguese drivers Duarte Lopes, Andre Caiado and Miguel Neto of Bin Drai Karting Team cruised their way to victory in the opening round of the 2018 Dubai Kartdrome Endurance Championship, taking top honours in both the Pro ranking and the Nations Cup. Emirati karting ace Saeed Al Mehairi of Cambridge ME Interiors started the contest well by edging out Bin Drai Karting Team by just 0.058 seconds in qualifying to grab pole position with a best lap time of 1:12.033 on the Reverse International circuit.

Cambridge ME Interiors also controlled the opening laps of the race but after a few hours the team tumbled down the grid while Bin Drai Karting Team, Dubai Falcon Racing Team and Team Emirates moved up to fight for the lead.

Team Emirates controlled the race at the six-hour mark, but as the pit stop strategies developed into the night, Bin Drai Karting Team emerged as the frontrunner.

By the time the last allowable pit stops were made, Bin Drai Karting Team was firmly in control of the race.  The team held on for the victory, with Andre Caiado driving in for the chequered flag, winning with a lap to spare over the 2015 Pro Champions, Dubai Falcon Racing Team.

On the podium, Pedja Jakovljevic, Team Manager of Bin Drai Karting Team, commented on his winning squad, “They did a fantastic job.  They didn’t make any mistakes.”

“Everything went smoothly and, honestly, we are very happy because we finished the race without any problems.”

After challenging for the race lead at times, Team Emirates settled for third place overall but it will be consoled with a first-place trophy in the Corporate ranking, well ahead of LD Russia who finished second in class and Redline Racing in third.

Other awards included Prudent Motorsports India earning the Newbie Trophy and FZR Falcons picking up the Spirit of the Event Award.

While the race was happening on track another competition was held off-track in the RaceRoom sim racing zone of the Dubai Kartdrome.  Aron Demirovski won the RaceRoom Challenge with a best lap of 45.421 driving a Radical SR3 at Brands Hatch Indy Circuit.

Kartdrome Manager David Bright reflected, “Congratulations to Bin Drai Karting Team for getting its first win.  It was also great to see many new faces and 25 teams to fill the grid.”

“The Reverse International circuit was very popular with the drivers and the new formats we employed for practice and qualifying worked well to allow for a smoother event and more strategy.  This opening round was a big positive for the rest of the season.”

Round Two of Dubai Kartdrome Endurance Championship will take place on 27-28 April 2018.